I have looked around the forums and seen some helpful questions and answers around model building, but with ModelBuilder being relatively new to me, I have struggled to fully understand everything that has been said.

Where I work we have a process of using OS Codepoint data to form our boundary area. So for example the North East of England. Usually this is a manual approach we do a few times a year, but I decided it would be a lot easier if we just ran a model to do this.

So we have a polygon feature called 'NE_Area' which contains codepoint polygons for the North East area. I have created a model that uses the NE_Area shapefile, selects all records and deletes them.

Where I have got stuck is when I need to use a selection by location tool to select multiple codepoint polygons (all of which make up the NE area, TS, DL etc.), which intersect a polygon shapefile we have which covers the North East Postcode area. The query shown below is an example for the Stockton Borough polygon we create: 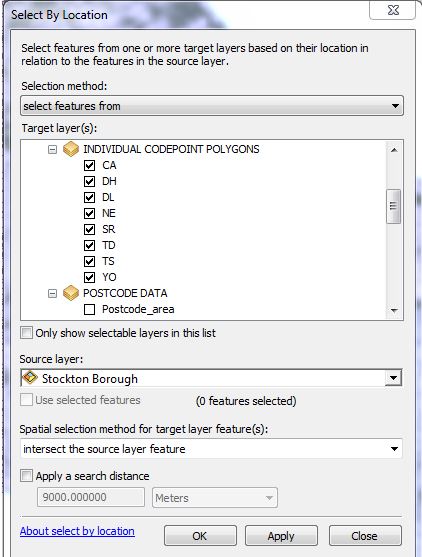 Once all the relevant code point polygons are selected I copy and paste them into the NE_Area shapefile.

I was hoping in the model I could configure it to use all of the individual codepoint polygons, select all which intersect with the North East postcode area polygon, and finally copy and paste the selected records into the North East polygon. Can I do this as a single tool in the model? I have been playing around in model builder and I don't know if I can... the only work I can think of doing it is if I use a select tool on each individual postcode area, export it out to a shapefile, then eventually merge them all into one.

As mentionned in the comment, ModelBuilder does not take multiple inputs like you do from the GUI. Therefore you have two solutions:

Not the answer you're looking for? Browse other questions tagged arcgis-desktop modelbuilder select-by-location or ask your own question.