Calculating distance while adjusting for obstacles in ArcGIS Desktop?

I have a global grid of points in the ocean and need to calculate the distance to and identify the closest 10 polygons along the coastline for the entire world while also avoiding crossing land.

For example, in the Figure below, the circled point would not include the green line distance. Instead the distance would consider going around the peninsula.

Near table produces the type of output I need but calculates distances without consideration for whether the path crosses land.

I also tried cost distance by creating a raster of the land at high cost and ocean area at low but if my understanding is correct, that type of analysis is limited to between just two points and the output isn't distance, it is a distance raster.

I have roughly 40,000 ocean points and polygons buffered around 1 degree of coastline. I need to find the 10 closest polygons for each point. 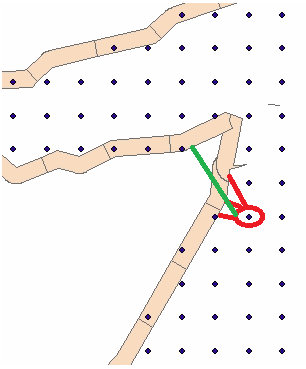 I think an untested answer to this may be to include steps something like:

Not the answer you're looking for? Browse other questions tagged arcgis-desktop arcgis-10.1 distance proximity or ask your own question.

5
Average Proximity Metric
1
Calculating Closest Distance Between All Combinations of Set of Polygons using ArcGIS for Desktop?
7
Creating a point on edge of closest polygon
5
Pacific-wide Projection for distance?
7
Calculating distance between points of same layer using QGIS?
0
Calculating Distances Between Polygons: One to Many, ArcGIS 10
0
Calculating shortest distance between two points on water, avoiding land?