Extend tool appears to do nothing?

Anyone know if there's some secret magic parameters that need to be set for the Extend and Trim (Editing Toolbox) tools in ArcMap to run properly?

I have a dataset of about 2000 "interior" lines which have been systematically separated from their surrounding "exterior" lines, and need to be extended or trimmed in order to reconnect with their borders.

I can do this manually one each line using Extend/Trim in the Advanced Editing toolbar, but as I need to do 2000+ records (plus a possible 16 000 for another project) I really need to do it in batch mode. This would mean using the Extend/ Trim tools from the Editing Toolbox. However, I can't seem to get these tools to actually run properly.

When I run Extend (Editing Toolbox) the tool runs 'successfully' in about 0.45 s with no error messages, but doesn't actually do anything. I have several test areas where I have measured the distance of the gap between the line that needs to be extended and the next line, these gaps are 0.5-0.8m maximum. I have set the Extend distance to various lengths such as 1.0m, 1.5m, 2.0m, as well as leaving it null, which should extend all lines to the next nearest feature. It still does nothing, the lines in my test areas do not appear to be altered at all. I've read through the ArcGIS documentation and a variety of forum posts, and I still can't figure out what I'm missing. I've had a similar lack of results when using the Trim tool.

Anyone have any idea what I might be missing?

I am using ArcGIS for Desktop 10.2.2 with an Advanced license.

Here is an example of an area of "interior" (blue) lines that need to be extended to the "exterior" (green) lines. 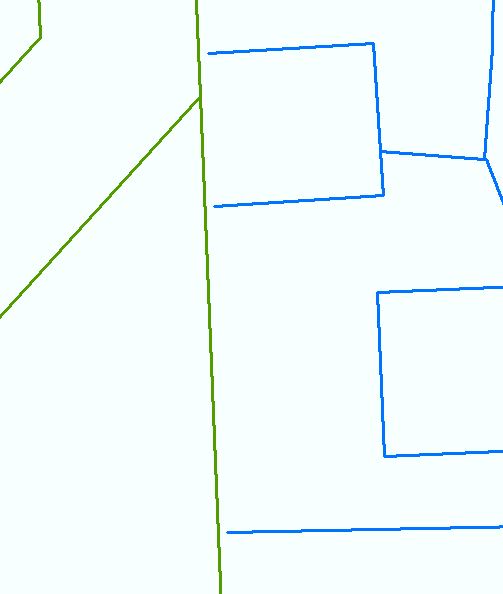 Thanks folks for your suggestions. I finally figured out what it was, it was an error I'd introduced in the pre-processing.

Basically the lines in my dataset were derived from a polygon dataset originally. So there was duplicate lines in the dataset, redundant in geometry but different in attributes, wherever two polygons had previously been touching. The duplication in line geometry was confusing the tools and made it so it couldn't recognize those lines as undershoots or dangles.

I ran a 'Duplicate Geometry Check' (Data Reviewer) to visually verify this, then used 'Delete Identical' to remove line features with identical geometry but different attributes. Once I did this, Extend and Trim both worked as originally expected! (Although it will cause me later headaches when I try to re-build the polygons from lines...but that's another issue.)

Not the answer you're looking for? Browse other questions tagged arcgis-desktop arcgis-10.2 extend or ask your own question.

1
Problem with Extend Line tool in ArcPy?
4
Extending line to feature programmatically
12
Extending line by specified distance in ArcGIS for Desktop?
0
Cleaning up Line Features
2
Is there a tool that allows the same functionality of extend/trim feature that was available in 9.3?
4
Making 'persistent' ArcMap tool without creating Python add-in?
1
ArcGIS: segmenting buffer based on polygon corners
3
Extending lines to Points without altering original geometry using ArcMap?
1
Extend line (utility-water) to polygon (building)
1
Extend many line of a given distance