Using Arc 10.3.1, if I manually enter the names of multiple shapefiles (all from the same folder) into the Check Geometry tool, the (single) output table lists the errors that exist in all of the shapefiles. 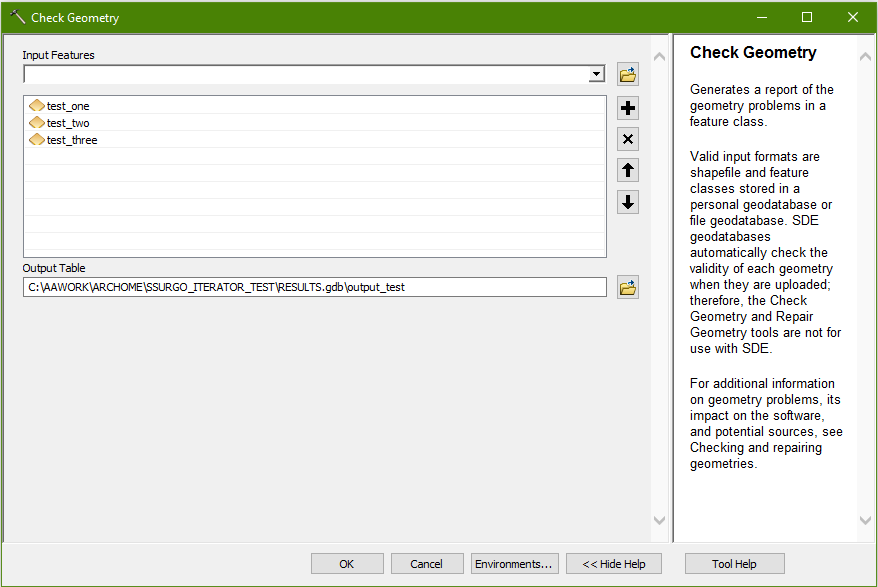 However, if I iterate those same shapefiles (using the Feature Classes option), the output table only lists the last shapefile that went through the iteration. Here's a screenshot of the model: 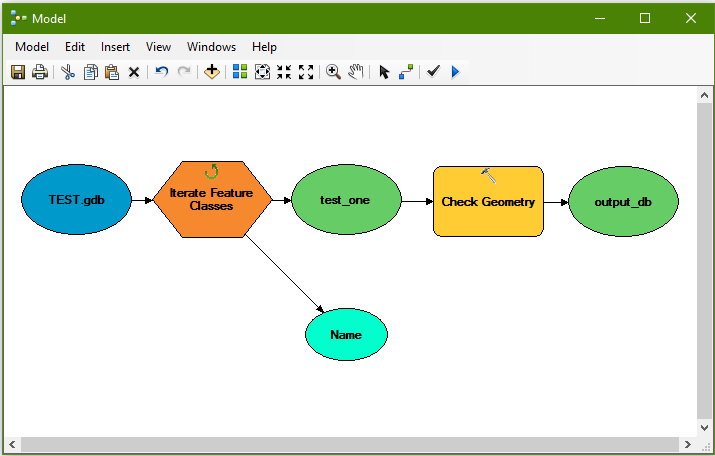 I suspect that the iterator is running Check Geometry not once, but three times, with a single input shapefile going through each iteration, overwriting the previous output.

How do I get the iterator to list all of the shapefiles with errors, either in separate output tables or aggregated in a single output table?

That being said, you can go in model builder and use the name as an inline variable (double click on ouput and insert %Name% somewhere into your output variable name, e.g, C:/temp/mygdb.gdb/output_%Name%

First thing to appreciate when running the Check geometry tool by itself is what are you inputting? It is a LIST of FeatureClasses.

If you want to use an iterator you need to be collecting the output of the iterator into a LIST using the Collects Value model only tool. You then feed the list of FeatureClasses into your Check geometry Tool. To do this you create a sub-model with the iterator and expose the output of the collect values tool as a parameter as shown below.

Embed the sub-model in a master model and simply connect it to the check geometry tool.

Do not make the mistake of linking the Check geometry straight on to the output of the Collects tool IN THE SUB MODEL as that is very inefficient. You want to create the list in the sub-model and feed that out to the master model once.

Not the answer you're looking for? Browse other questions tagged arcgis-desktop modelbuilder arcgis-10.3 iterator or ask your own question.