This question is similar to a previous post where the member asked if it were possible to create Theissen (Voronoi) polygons from lines:

The issue I'm trying to resolve is that I have hundreds of thousands of point features that belong to an assigned territory by clerks who may or may not be familiar with the geography of these areas. As such, many points get assigned the wrong territory value. In order to fix this, I want to find points that don't belong within a cluster and generate polygons from the points that are aligned with streets. If a street dead ends then I want the voronoi polygon to end when it meets the edge of the closest point's voronoi polygon. Once I am confident that the territory boundaries have been accurately defined, I would like to perform a spatial join and carry over the polygon territory values to the point features.

I grasp that the best approach is to convert the polygons and line features to raster in order to increase precision of Voronoi cell boundaries (although I could be totally wrong on this).

The only difference is that I want to create Voronoi polygons from point features but want the boundaries to stop when they encounter the boundary generated from another point within the feature class as well as a line feature.

This is what I want to fix so that the polygon boundaries do not cross the line: 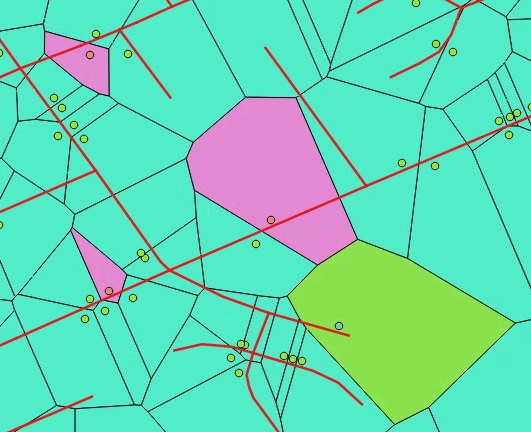 I brought the features in from QGIS to ArcMap to use features to raster tool and got this: 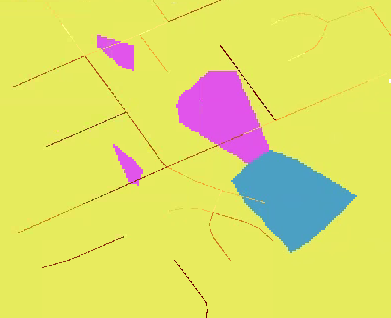 I'm not sure where to go from here.

Browse other questions tagged raster voronoi-thiessen or ask your own question.