Accurate way to show values of each classification range in the legend in QGIS?

What is the best and most scientific way to represent data in the legend?

For example, in the picture below (my data), picture 1 is the actual data (too long in my idea), picture 2 is a rounded figure made by allocating precision 0 in QGIS to graduated style's classification (in my opinion, it shows the maximum and minimum of my data because I'm not going to report it directly into my report), and finally, picture 3, which is a precision -1 in QGIS that looks clean!!

So, my question is that which of these three legends demonstrates the most accurate way of displaying figures on the map? 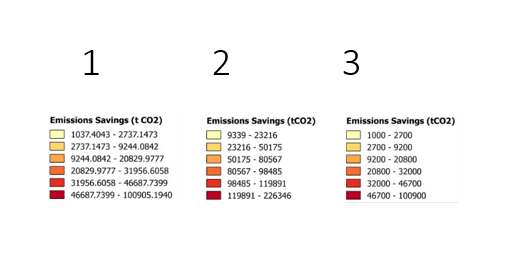 One problem I see in all 3 legend examples is that you have common values for adjacent classes without telling which class that value belongs to.

For example, take the first and second classes in the third example:

Which class does 2700 belong to? The first one, or the second one?

First, I suggest learning in what class QGIS is placing 2700 before making any changes in the legend. Then, do something:

One alternative is to use symbols like [ and ( to indicate that. The first symbol would indicate the value belongs to the class and the latter that it doesn't. For example:

Now, we know 2700 belongs to the first class.
(Always use a convention/terminology that does make sense in your context).

Another more intuitive way would be to use something like:

Not the answer you're looking for? Browse other questions tagged qgis cartography legend or ask your own question.