How to make a polyline using distance and direction? [closed]

Ask Question
Asked 3 years ago
Active 3 years ago
Viewed 203 times
1
Closed. This question is off-topic. It is not currently accepting answers.

QGIS newbie here. Given a table of values for distance (km) and direction (degrees), I want to create a polyline starting from a coordinate (lon, lat). I am going to use this to backtrack the origin of a particle in the ocean. My question is very similar to this:

The problem is that I do not know how to use PyQGIS.

With the limited info of the question I have assumed that the data is in a csv table with the start_X and start_Y in separate columns. This should work then if you are using OSGB36 or any coordinate systems that are in meters and is not a pyqgis answer.

In theory this is simple vector movement. In my image below you have your starting point. All you need to work out is which direction the line is going and then add/subtract the distance from either X or Y which will give you your end point.

EG: If the direction is between 90 and 180 degrees then the distance needs to be added to the X coordinate and subtracted from the Y coordinate 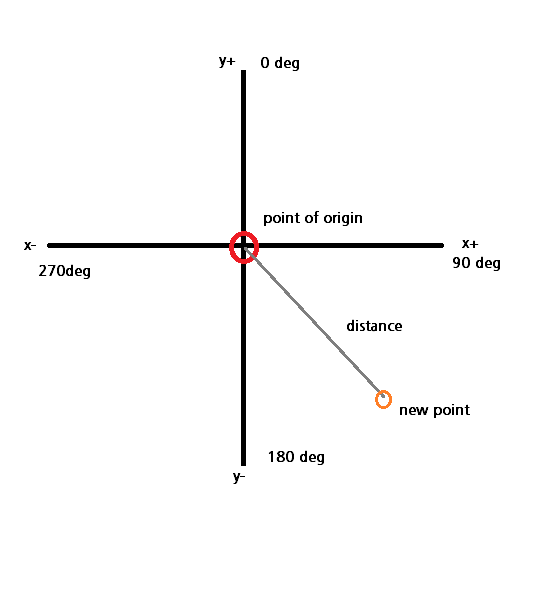 I'm not sure how to do this in excel but I think a nice easy way to populate that table (if you have a lot of data), is to add it to QGIS (save the table as a shapefile first), create 2 new columns (end_X, end_Y) and using the field calculator on end_X column write something like:

And likewise with the end_Y column:

Then open up the toolbox (under Processing) and search for Points layer from table to create a new point layers of your end points.

You can stop here as you've found your end point, but if you really need the lines then create another new column in the table and concatenate the four columns start_X, start_y, end_x, end_y with the text below to create a new column with the geometry in WKT format:

save the shapefile as csv then add the table again to QGIS, this time using this new column as the geometry (remember to set geometry definition to Well known text(WKT))

This is definitely a long winded version which python could make a lot easier but sadly don't know that. Remember that if you are working backwards to find the origin then the adding and subtracting of the X Y coordinates will need to be reversed.

Not the answer you're looking for? Browse other questions tagged qgis pyqgis line or ask your own question.

6
How to draw a polygon given a distance and bearing in QGIS?