The tool systematically crashes with a Windows message stating that Python has stopped for three of the indices. According to the result processing windows it is related to a division problem.

The only index that doesn't make Python crash is the last one.

I have checked the raster and cannot find a single pixel with (red+green+blue)=0 or (red+green)=0, although there are a few with (green+red-blue)=0. Checking the results and comparing the values at single pixels, it seems that it is in fact a 0 in the numerator which is causing the problem, in the three indices. In fact, those pixels with (green+red-blue)=0 are set to inf., while those with a 0 in the numerator are set to nodata.

I don't understand why a 0 in the numerator should cause a nodata value, but I don't get either why this would be a problem for the calculation, as nodata values are common in many raster files.

I should also notice that my original raster is a 4-band (RGB+alpha) geotiff file (byte file with int8), which no data value defined. Before sending it to the calculator I clip it and get a smaller geotiff, which is Float32.

A final note: everything works smoothing when the raster calculator is accessed from the menu.

I provide below an image of the settings for calculating GCC 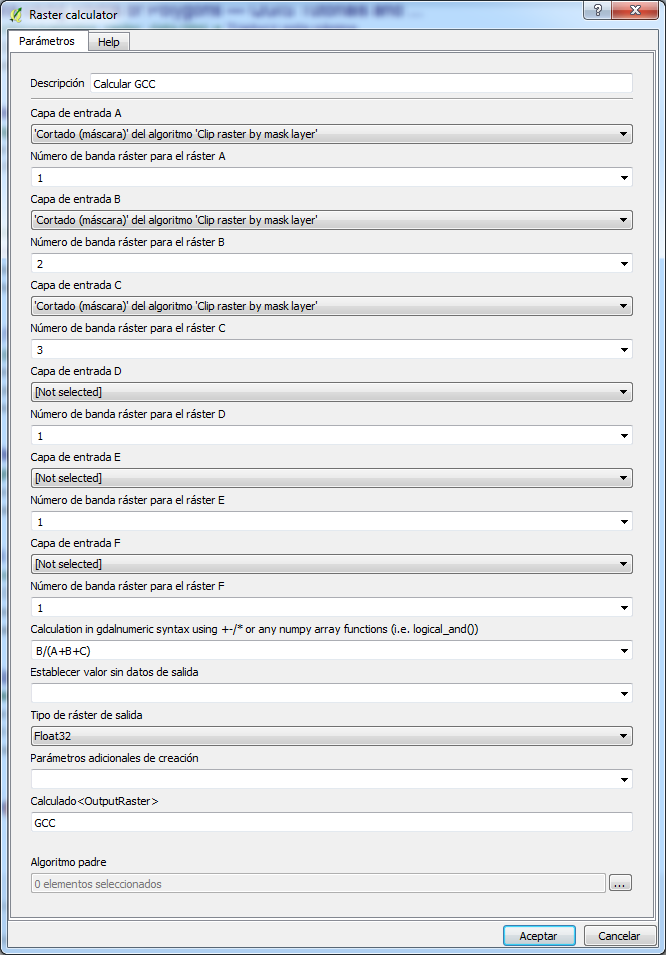 Edit: new findings! If I set all output as temporal layers after the crashes most of the indices have been correctly done, but with those pixels with the numerator=0 as nodata. The exception is VARI, which appears as all NaN in the legend...and when trying to open its properties I get an Exception error. However, when I set a file name for each of the indices, all of them appear as nodata rasters (although no problem opening the properties this time).

Can someone can give me a hint?

Browse other questions tagged qgis qgis-modeler multi-band gdal-calc or ask your own question.

39
How to set all pixels with value <= 0 to "nodata" in DEM raster?
6
Extracting 5 bands geotiff file into RGB file using GDAL?
1
How do I select from a multiband raster?
1
Get colortable from three-band RGB raster (brick) with R
3
Multi-band raster color model in QGIS. Why RGB (668, 983, 1007) in Uint16 appears green?
0
Classify DEM pixels
4
Changing nodata pixels of -3.40282347e+38 to a different number in QGIS
1
Where can I change the default color bands for GeoTIFF images?