What resampling method is used in the raster 'Save as...' dialog?

I received a raster that was resampled using the Save as dialog in QGIS. Now I need to describe the resampling process in a report. But I could not figure out the method used in the resampling. Is it Nearest Neighbor? Bicubic?

This question has been asked before (Resampling method used in QGIS Raster save as?) but the answer does not specify the method used.

I also tried looking at the QGis source code in GitHub, but unfortunately, I could not find where the magic takes place (I'm not a programmer)

If the QGIS library is using GDAL for a backend, my guess (without checking QGIS source!) is that it's using nearest because that's the default for both the gdalwarp and gdal_translate utilities.

In the future, and if possible to request that the process be controlled manually and also documented with the parameters you need.

For example, if the person warping or changing resolution could use Raster > Projection > Warp (Reproject)... or Raster > Conversion > Translate (Change Format)... where both dialogs can be edited to include -tr (change target resolution) or -r (choose resampling method).

To make the changes like in the screenshot provided, click the pencil button near the bottom right of the dialog. 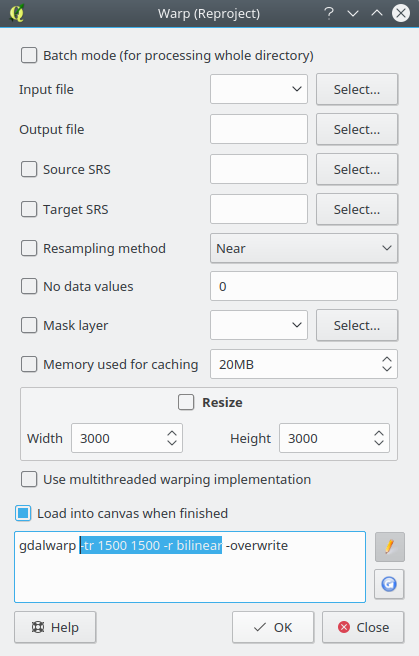 We can carry out a small experiment that proves that the closest value is taken when reprojecting a raster by exporting it by default.

We can create a 5x5 pixel raster, with some simple values, and georeference it to a grid of 10 degrees of longitude by 10 degrees of latitude somewhere in the world.

Let's reproject on the fly to some system that deforms our grid a bit, for example World Sinusoidal (EPSG 54008).

Let's export our raster layer to the new system, using the default values, and let's see the result ...

The value assumed by each new pixel is effectively the same as the closest matching pixel (we refer to the centers).

Note: the metadata AREA_OR_POINT=Area was defined by default in the original raster.

Not the answer you're looking for? Browse other questions tagged qgis raster raster-conversion or ask your own question.

6
Resampling method used in QGIS Raster save as?
1
What process does QGIS use when re-exporting rasters to a lower resolution?
2
Reprojecting rasters in QGIS 3.8.2

53
What is Lanczos resampling useful for in a spatial context?
26
What resampling technique should be used when projecting aerial photos?
3
Raster format with rotated cells - no resampling
3
How to find out coordinate system to use pre-1940 Soviet map as raster
8
Why do "stripes" appear on raster?
0
What is the default method in raster package R resample?
1
QGIS: where is the bilinear resampling option when saving to a new raster?