I have a QGIS project with four layers: A, B, C and D.

I don't want to see the other features from layers B, C and D (where values are different than the ones selected for ATLAS automation (for example 87, 88 or 94)) for layer A - only the ones which match.

In the end I would see on the first map the data from layers B, C and D where attributes in the column 'Layer A Reference No' = 100 as this is the first map selected by ATLAS (based on Coverage layer A).

On the second map (where ATLAS selects value 101 from layer A) I would see only the data from layers B, C and D where attributes in the column 'Layer A Reference No' = 101.

Is this possible without Python?

At the moment the only thing I can do is to query layers B, C and D in order to see on the map the data where the value in the column 'Layer A Reference No' = 100 (for the first map), 101 (for the second map) etc. and then use layer A for setting location.

I have found the solution.

Layers B, C and D

They need to be rule based (style) and need to contain the following rules (in Style):

"Feature ID" <> attribute( $atlasfeature , 'Feature ID') - for all records we don't want to see ( I styled it as transparent)

Settings for the layer A, which works with ATLAS:

Output filename expression: attribute($currentfeature, 'Feature ID') - this is not mandatory but will produce single files with the name = to the values from Feature ID column

Single file export when possible - NOT TICKED - this can be ticked in order to create a booklet, but not in my case 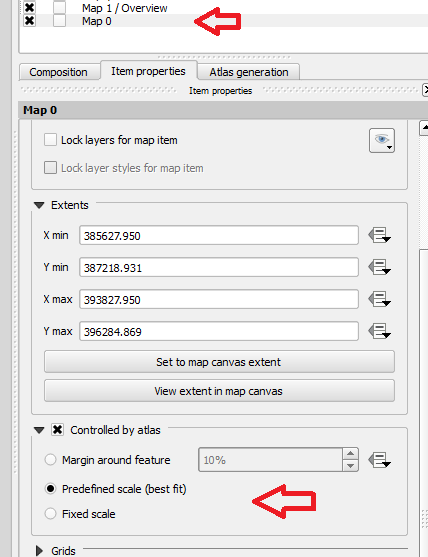 Thanks Jesse again. I hope this will help the others as well at some point.