How to join a layer once when toggling visibility?

I have a set of layers contained in several groups ("First group", "Second group" and "Third group"). I created a function where when a layer from any of these groups has its visibility toggled, it is joined by a 'parent' layer which shares the same name as the group the layer is in: 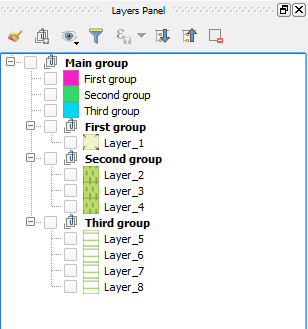 The problem is that when I click on a layer from the "First, Second or Third group", it is joined several times instead of just the once.

For example, if I click Layer_3 once and then check the Joins properties:

Here is the code:

I'm not exactly sure why it is being joined several times, is there a way to make sure it is only joined once?

I checked QgsVectorJoinInfo and the QgsVectorLayer::vectorJoins to see if it is possible to do a check (i.e. if this layer has been joined then pass) but couldn't find much information.

Thinking more about this using a dictionary to hold the layer names and the related layer join field name and evaluating each checked layer to see if it has the reference joined field should be a better method. If join field is present, than skip, otherwise perform the join.

This should eliminate extra joins on a layer that already has a join.

Not the answer you're looking for? Browse other questions tagged qgis pyqgis attribute-joins or ask your own question.

2
How to get vector feature by mouse location?
4
Toggling layer visibility
3
Checking/unchecking rule-visibility of layers at once in QGIS
1
Pyqgis: How to take output from Qgs.ZonalStatistics and join by ID with point layer
0
PyQGIS change layer visibility
1
Rename layers within group automatically by adding a prefix derived from group name using QGIS
6
First added layer loses its symbology when adding the same layer twice but with different names using PYQGIS QgsProject.instance().layerTreeRoot()