Scheduled Tasks no longer run after updating to ArcGIS 10.3

I have a bunch of scripts written that run daily using Windows Task Scheduler. Yesterday i updated my version of ArcGIS from 10.1 to 10.3.1. Python was also updated to 2.7.8 as part of that installation. After the update, all my scheduled scripts get an error message of "1% is not a valid Win32 application. (0x800700C1)" 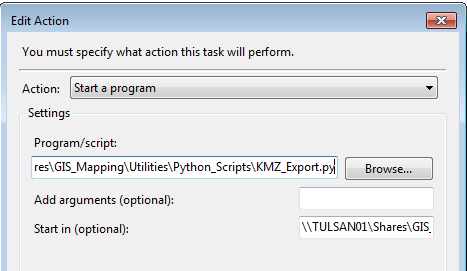 Under the settings tab i set "if the task is already running, then the following rule applies:" to "Stop the existing instance"

It is also set to run whether the user is logged on or not.

What am i missing?

I would hazard a guess that the path to your python.exe changed. You many need to update your environment variables.

If you go to your control panel search for Environment Variables. Now under System Variables there is a variable called Path. Here you can add default paths to windows so it know about other programs, like python.

So first I have a variable called PY_HOME in my User variables which has a value of C:\Python27.

Second, in the Path variable under System Variables I append to what is already there. I add "%PY_HOME%;%PY_HOME%\Lib;%PY_HOME%\DLLs;%PY_HOME%\Lib\lib-tk;".

If that doesn't work you could also have your task run python.exe and pass your .py file to that as an argument.

It turns out that there were enough changes between ArcGIS 10.1 and 10.3 that every single one of my scripts was broken in some way or another.