When trying to connect to remote PostGIS database with QGis, getting "ERROR: relation 'geometry_columns' does not exist

Getting the error message/popup stating:

when trying to connect to a PostgreSQL/PostGIS database remotely on QGis (Mac). The pg_hba.conf and postgresql.conf files on the server don't appear to be the issue here. Perhaps there's a way I can grant all privileges for these tables mentioned in the error, but there aren't any tables called 'geometry_columns', so I'm stumped so far.

Version of postgresql on remote server is:

I think the answer from Alex Leith is the most likely cause of this error; the geometry_columns table/view gets created as soon as postGIS extension is created.

But it could still happen even if postGIS extension has been added, I think there are two aspects to this..

Table in different schema to postGIS

I found this could happen if the table I was importing was in a different schema to that where the postGIS extension was loaded. This meant that QGIS couldn't "see" the postGIS functions, data types and tables/views, as it assumed it was in the same schema as the database.

Got a very similar warning:- 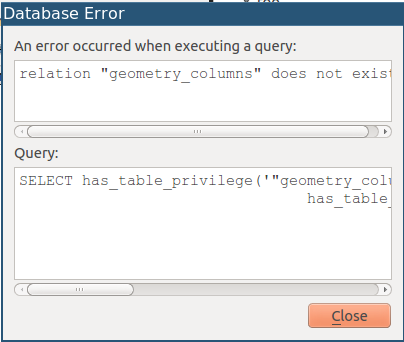 To reproduce this, I took an existing local postgis-enabled database (with tables in 'public' schema), dropped the postGIS extension, and recreated it in a new schema, 'test')

Now, attempting to add a table from the 'public' schema will result in that error.

There's a setting called search_path which can be set at database level, which will allow qgis to see schemas other than the one the database is in. If you have access, something like

Be careful tweaking that setting, I found I got QGIS crashing on opening projects with one database connection I'd altered that way. Luckily, you can remove connections without needing to open a project using the 'elephant' icon. I'll raise a ticket if I ever manage to reproduce this problem.

QGIS expects postGIS to be installed in Public schema

It also looks like qgis expects postgis to be installed in the public schema. If I created a database whose tables and postGIS were both in a schema other than public, I got the message

Sounds to me like there's either a permissions issue (the user you're connecting as can't read the geometry_columns table) or you aren't connecting to a database that has got the PostGIS extensions installed.

Have you enabled PostGIS extensions?

Are you connecting to the right database?

Does your user have the correct permissions (can you connect the the DB using PGAdmin with the same credentials, and if so, can you see the geometry_columns table)?

Not the answer you're looking for? Browse other questions tagged qgis postgresql or ask your own question.