What are some 3D visualisation tools that successfully work with GIS data?

Ask Question
Asked 10 years, 1 month ago
Modified 6 years, 2 months ago
Viewed 4k times
16
This question's answers are a community effort. Edit existing answers to improve this post. It is not currently accepting new answers or interactions.

There are a large number of 3d modelling tools available (both open and closed source). I would like to be able to:

I have tried a number of tools but they never quite seem to be able to do these three points successfully. Do any tools exist that can reliably satisfy these requirements?

Assuming that money is no object, then yes, you can have all three at the same time. You'll have to invest in very robust hardware and video for starters. The difference between "games" and GIS when it comes to "game like speed" is that games have the luxury of catering the environment to the strengths of the video card and memory. The real world cannot do that.

If you want a tool that seems to do what you want with reasonable speed and functionality, I would suggest taking a look at GeoWeb3D.

I'm currently working with Vue Infinite 10.5 to bring in real-world elevation and point location data, and it hasn't been easy. Vue is a high-end 3D scenery solution used extensively by Hollywood. We chose it because it is capable of producing photo-realistic 3D visualizations at a reasonable price (about $1000 USD) and it has a Python API.

Vue doesn't really support the direct import of any GIS data formats, with the exception of USGS .dem files, which is pretty much useless in my opinion. There is a lot that has to be done to get the data in, but basically you have to extract everything to text, then use the Python API to programmatically push the data into Vue. We are able to keep everything in real-world coordinates and account for the curvature of the earth. The results are very nice. Here is a presentation on the project, and here are a few renders: 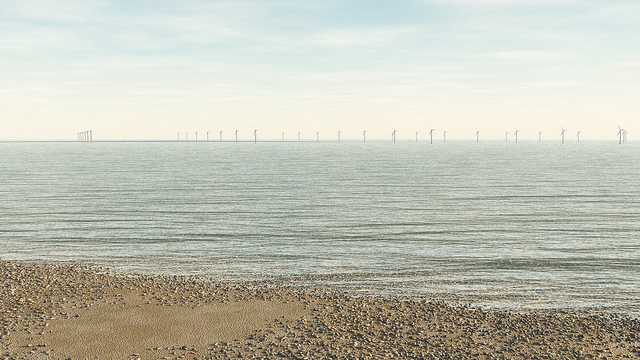 The beach above is 1/9th arc-second NED elevation data for the USGS and the wind turbines offshore were brought in as points in their real-world locations. 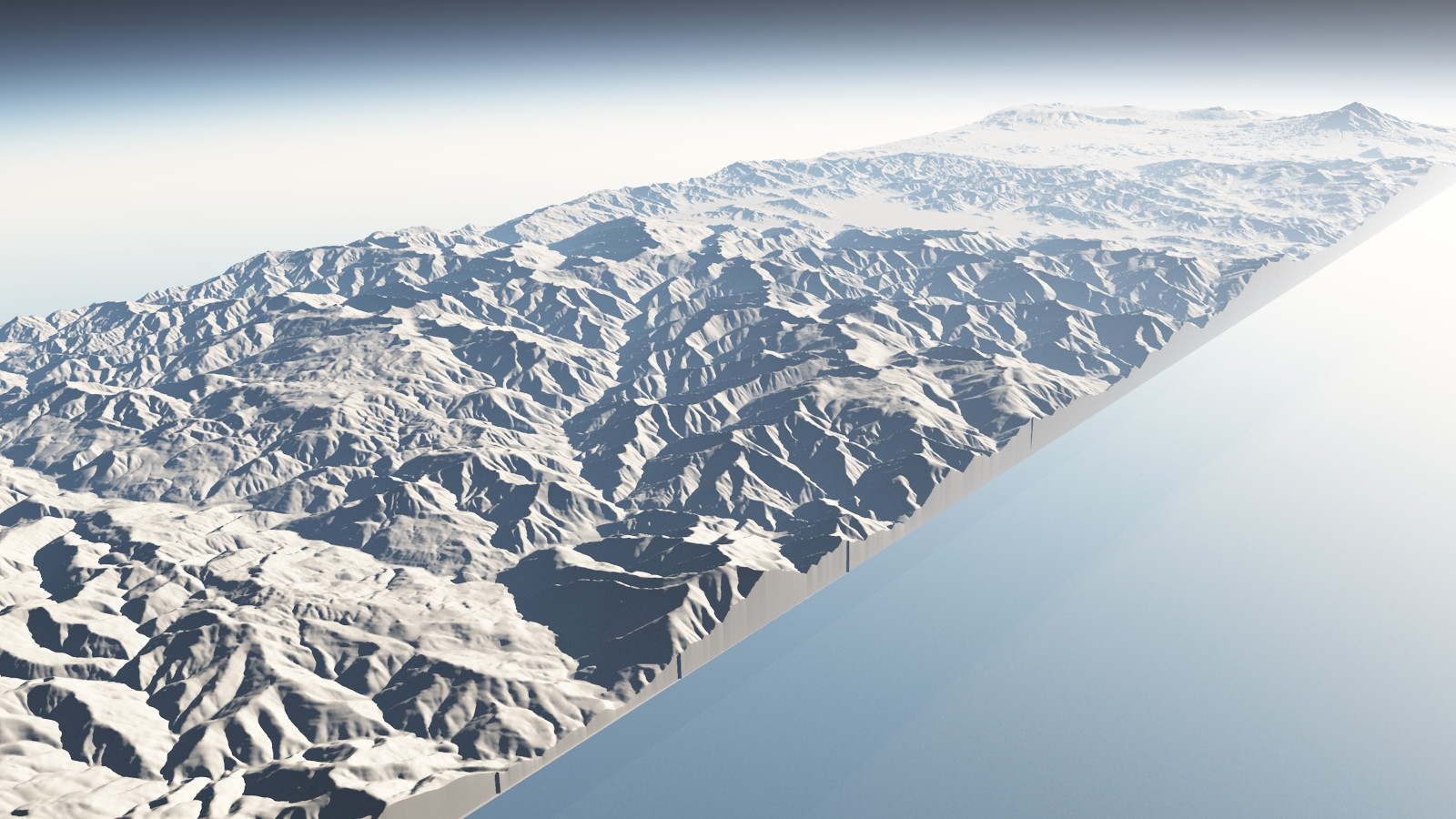 This one is 1/9th arc-second NED from northern California, that's Mount Shasta in the background.

I feel that Vue could indeed satisfy your requirements, especially if you are looking for true photo-realism, which is something most all packages that allow the direct import of GIS data lack.

A free and open source option would be the Virtual Terrain Project.

The goal of VTP is to foster the creation of tools for easily constructing any part of the real world in interactive, 3D digital form.

This goal will require a synergetic convergence of the fields of CAD, GIS, visual simulation, surveying and remote sensing. VTP gathers information and tracks progress in areas such as procedural scene construction, feature extraction, and rendering algorithms. VTP writes and supports a set of software tools, including an interactive runtime environment (VTP Enviro). The tools and their source code are freely shared to help accelerate the adoption and development of the necessary technologies. 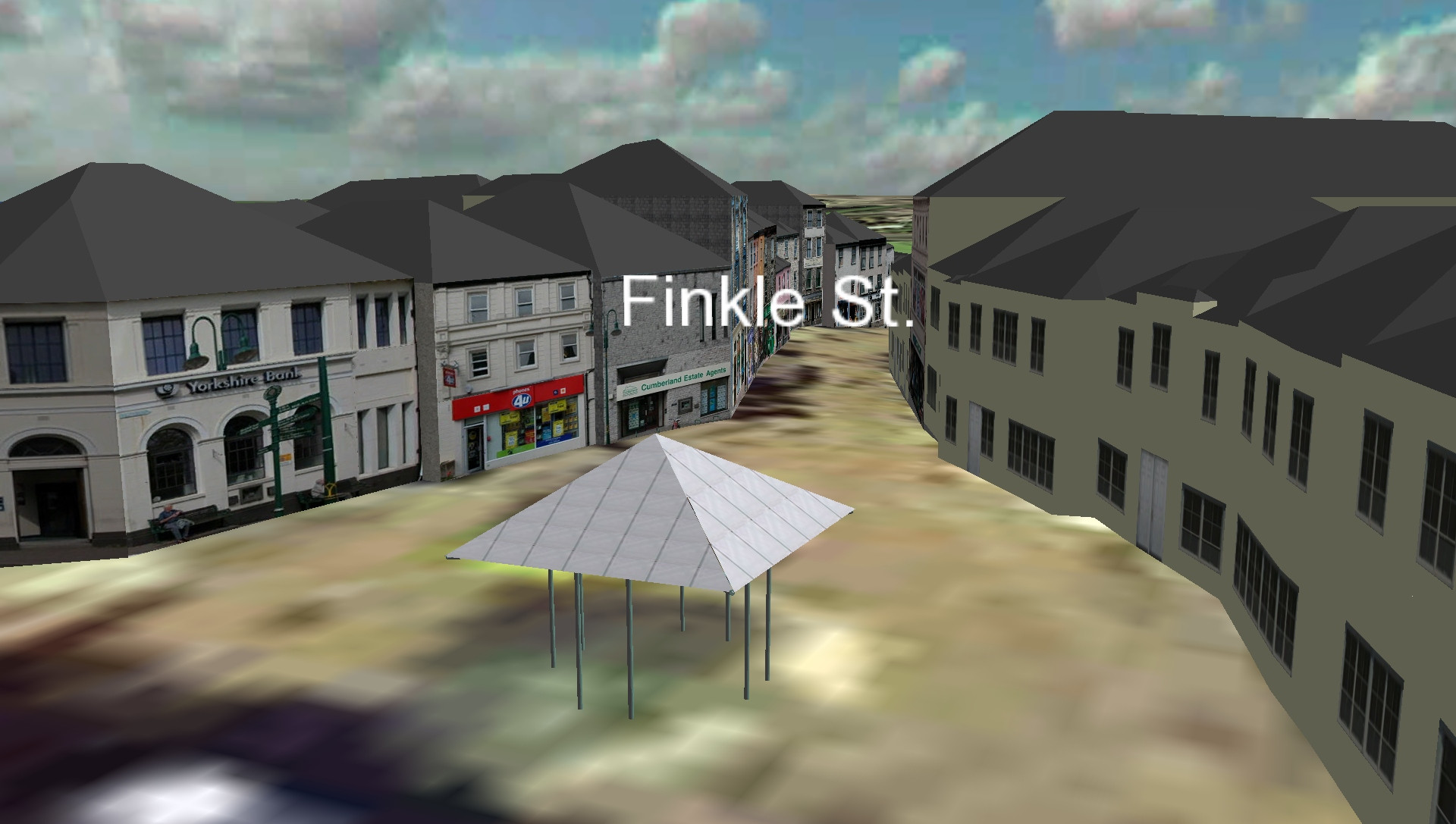 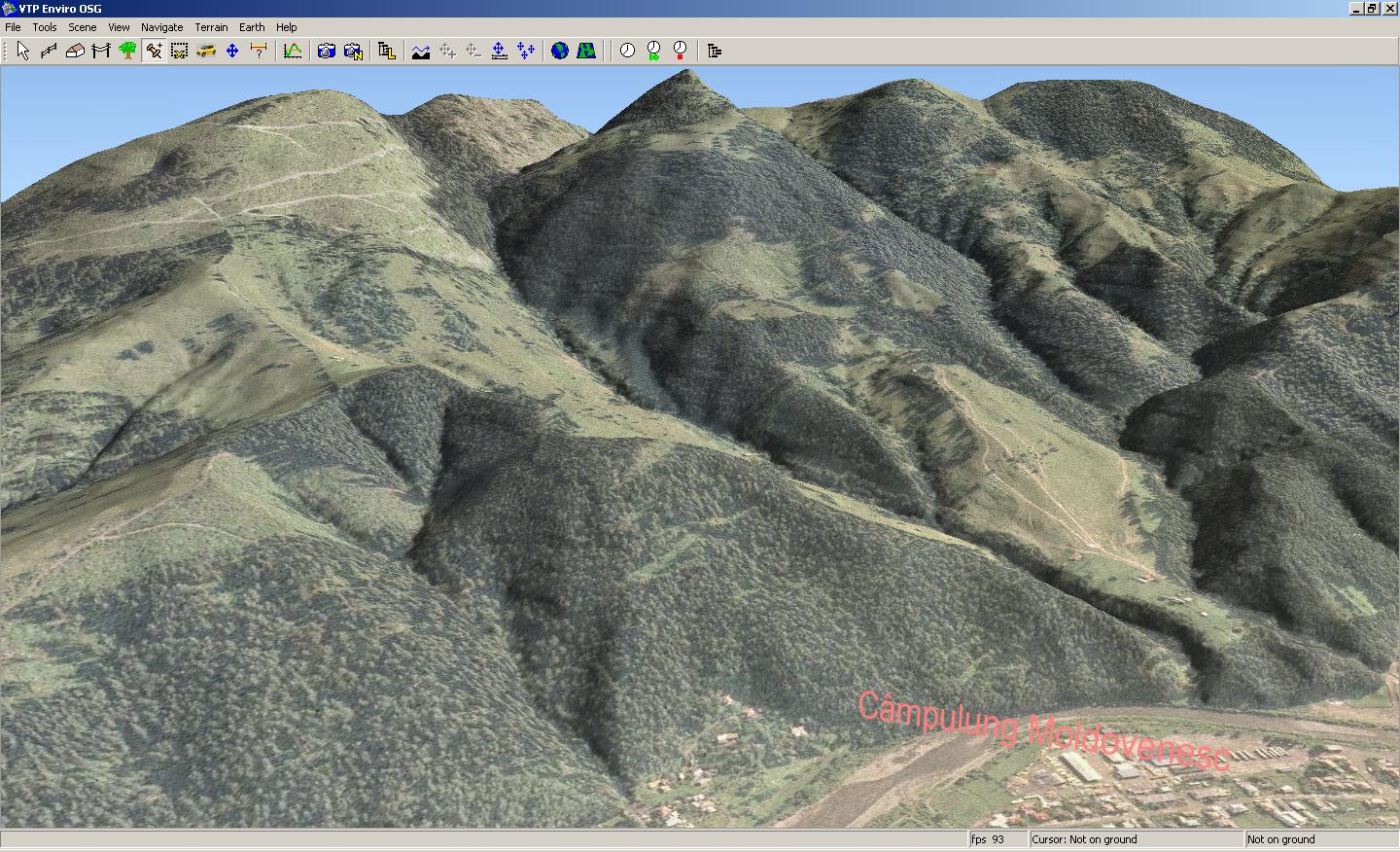 Yes, Geoweb3d is a tool that should work for you. I work for Geoweb3d. We have a new release coming out where you can view some of the lastest capabilities at the link below. Geoweb3d Desktop is packed with capability, so I would suggest emailing/setting up a demo if you are not sure if it has a certain feature you need.

I use Blender a lot and find it very versatile and effective. The only downside is that you have to 'roll-your-own' importers for much of the data, but once done you can reuse the code. Blender is undergoing a lot of rapid development as well, which is great and there have been substantial improvements in the Game Engine.

Another product that is often forgotten is ERDAS Imagine. I used to use this a way back and must admit I haven't used it for years (due to cost - I'm a freelancer so Open Source is my first port of call).

A start-up, GaiaStudio, provides software as a service for 3D visualization of terrestrial ecosystems. (http://gaiastudio.ca) The visualization is based on forest inventory and forest-growth projections. By using simulated projections, GaiaStudio can visualize the state of the forest in any future point of time. The demo server holds information on seven forest districts in British Columbia, but you can ask to expend their database for customized needs. 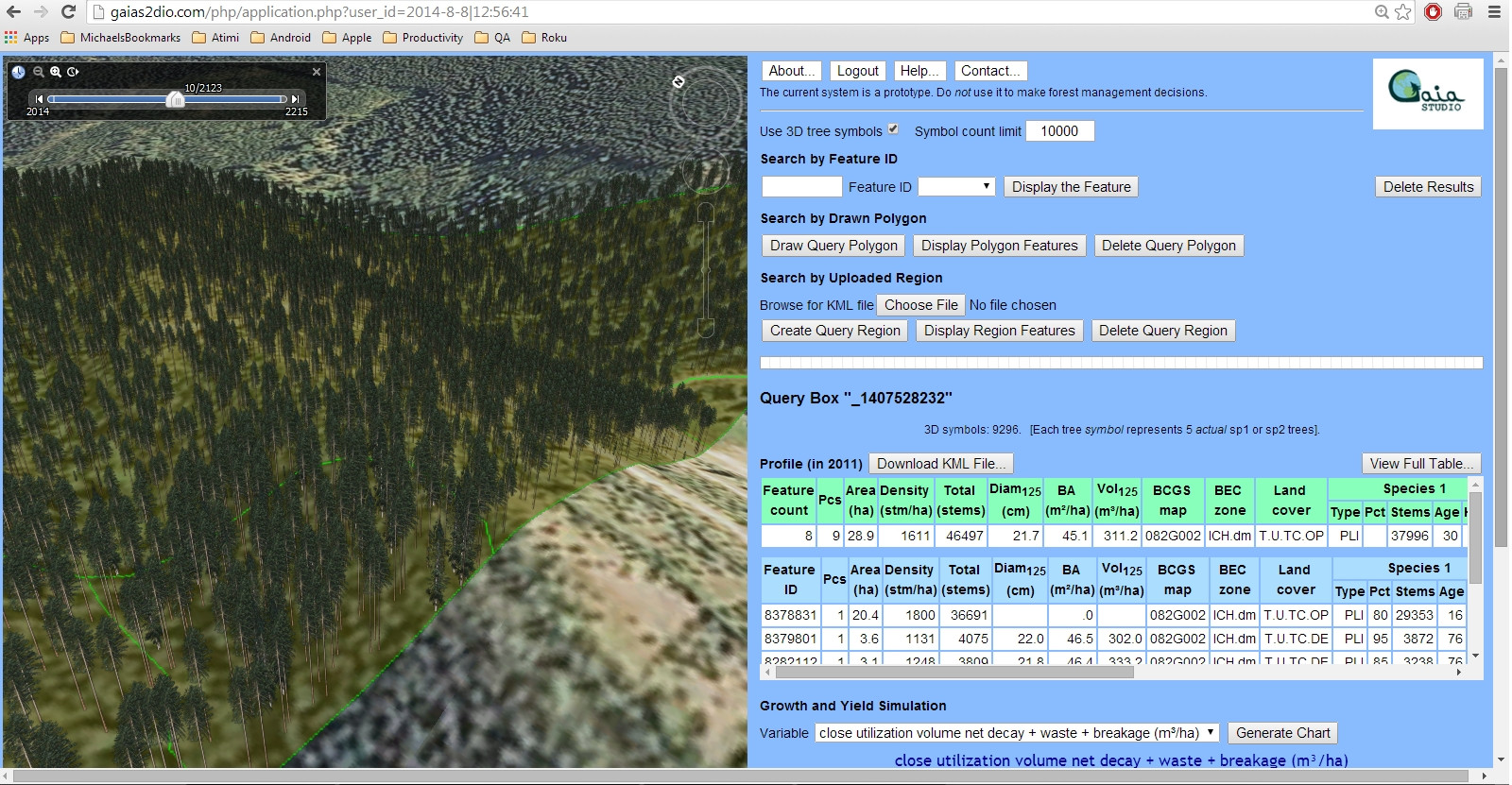 Share
Improve this answer
edited Aug 8, 2014 at 20:11
community wiki
cloud_traveler
Add a comment  |
-1
Want to improve this post? Provide detailed answers to this question, including citations and an explanation of why your answer is correct. Answers without enough detail may be edited or deleted.

Not the answer you're looking for? Browse other questions tagged 3d visualisation modelling or ask your own question.

10
What are some great examples of information dashboards integrated with core GIS capabilties via the web?
8
What are the main fields of applications of 3D GIS?
3
Creating 3D model of real terrain
2
What KML features are suitable to display 3D atmospheric density data using Google Earth?
2
Modeling data in PostGIS when Several Join queries with Geometry are Needed
3
SRTM data represented in 3D using Unity. Problem texturing with sat images
3
Why TauDEM specialized tools (e.g. D-Infinity Distance Down) are only available with D-Infinity flow model?