From shapefile to Python NetworkX?

I am being baffled by how apparently poorly NetworkX reads a shapefile and builds a graph out of it.

Below is a graphical example of a fake network built with 27 polylines all snapped together, so there are no topological errors (ArcGIS 10.3.1, License: Advanced). The coordinate system is the British National Grid (OSGB36).

The result is a graph plotted according to the spring layout, so the shape of the file is not preserved. Also, the image shows three disconnected components, which are absolutely fabricated, since all segments in my shapefile were snapped. Also, the coordinates of the nodes are imported as labels. 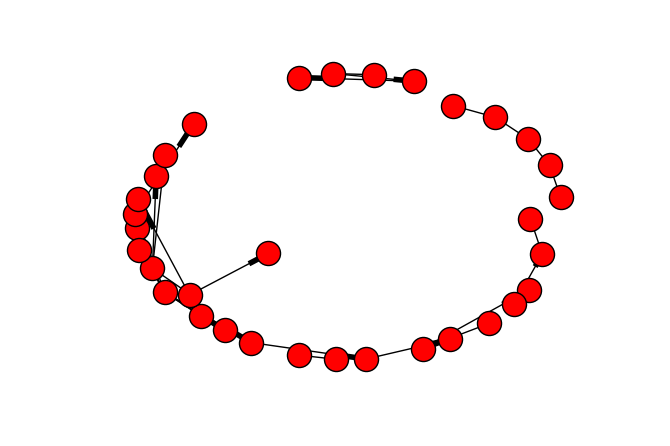 I wonder what the usefulness of the nx.read_shp() function is, if you are not allowed to reproduce the shapefile exactly. This is especially true if you want to make sure that the connections are recreated accurately.

This leads me to my question: how to play with NetworkX so that the graph is not plotted in some meaningless way, but reproduces the network shown in the shapefile?

I might have found a nice Python solution referring to the very shapefile in the question, so I am posting it for future reference.

Result and comparison. The final shape of the network might be shrinked in some direction, this depending on the plt.xlim() and plt.ylim() values used. With plt.figure(figsize=(10,10)) or other squares things might improve.

That will pretty much depend on how your shapefile is. Is it segmented (the lines break, when they encounter intersections)?

I haven't used read_shp for networkx, so I'm not sure.

I guess that read_shp might do some work trying to figure everything out and that might be related to a precision issue. That should be configurable, but it's not.

Looking at the source (https://networkx.github.io/documentation/development/_modules/networkx/readwrite/nx_shp.html#read_shp) you can see that networkx uses coordinate pairs as the keys. A slight difference in one of the keys will show what you are seeing, disconnected nodes/edges.

Try to investigate the nodes of the disconnected patches. I'm pretty sure one of the nodes have quite similar coordinates, but slightly different, thus making it another node.

Not the answer you're looking for? Browse other questions tagged arcgis-desktop python coordinate-system layouts networkx or ask your own question.