I've tried doing a join attributes by location using the zones as the target layer and the parcels as the join layer. I used contains with a precision of 2 to try an account for the boundaries touching. I have the attribute summary as sum and Keep all records. The outcome is a shapefile but there is no sum of the number of parcels in each zone even though I have a count column in the parcel attribute table.

Is this the best way of going about this? IS there a way I could select using an expression from either attribute table?

EDIT: Here are the images of the polygons and the Join dialogue box for the options I used: 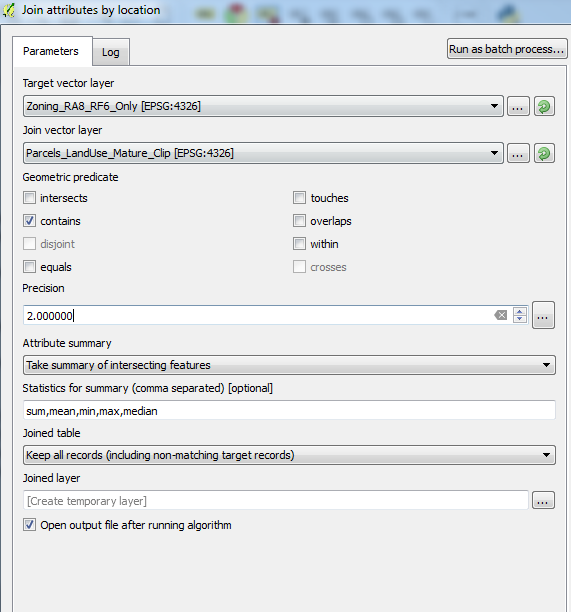 qgis polygon count
Share
Improve this question
edited May 13 '17 at 7:37

To find which parcel is located in which zone use the Intersection Tool under Vector-> Geoprocessing Tools with both layers as input layers.

The result is a layer, which contains every parcel (or part of it) which is inside the zone layer and the attribute table contains all attributes from both input layers.

Now you can either directly work with the intersection layer or split it with Vector-> Data Management Tools-> Split vector layer using the field which specifies the outer zone. Each of the new file now has directly the number of features which are located inside the corresponding zone.

Not the answer you're looking for? Browse other questions tagged qgis polygon count or ask your own question.

8
How to count polygons in multipart features?
1
Joining multiple polygons inside a single polygon in QGIS
2
How to count classified points in polygons?
1
Count points in polygon by attribute column for making choropleth
5
Ignoring edges when selecting polygons
2
AcrMap- How to use the dissolve tool with large amounts of polygons?
3
Join attributes from polygon layer using spatial relationship - Joining polygon layer has overlaps in QGIS?
2
Summing Area of polygons within vector layer within zone using QGIS?
3
Creating new point features from count number of existing features using ArcMap