The code I have for this is currently updating all records for the Line_Count field with the count of the point features (i.e. 2) for only the last record. Though, a print statement following the GetCount line will return the line count for all of the point features (with a few unessential iterations). I believe it is only printing the last row in 'result' for the Line_Count update statement. Is there an efficient way for result (i.e. result=int(arcpy.GetCount_management("tLayer_lyr").getOutput(0))) to be saved as a list or an array that can be written to the Line_Count field? ...Or would it be best to use a dictionary?

What do I need to do to appropriately update the Line_Count field for all of the records? Also, this process will be applied to a large dataset and will be extended to include 'where clauses'. Are there any suggestions as to how to make this as efficient as possible? 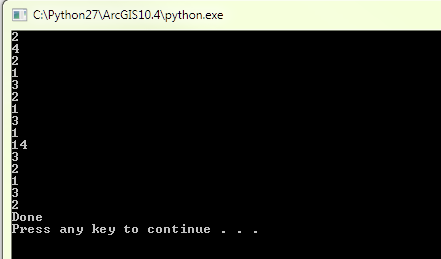 It is generally not an efficient approach (as several have commented) to use cursor processing in this way, but if you accept the performance hit (maybe you're not working with large feature classes), then you should at least eliminate the nested cursor. The update cursor can also be used as your 'read' cursor, so something like the following rewrite of your outer with block should work - this is untested:

Not the answer you're looking for? Browse other questions tagged arcpy cursor update list dictionary or ask your own question.

5
Randomly select a record to update using arcpy.da.UpdateCursor
4
Getting count of like features types based on field attributes using ArcPy?
1
Calculate and Restart Sequential ID for Unique Values in a Field
2
Update value in one table (feature class) by coping it from another table. The match between table is done on values from another field
0
Update & Delete Cursor Functions
0
Populate field with information from a different field based on matching record
3
Comparing value with value from the next row
2
Using arcpy.da.UpdateCursor to populate field with dictionary values