Recently I am investigating case of grounding vessels, one of the findings is the paper chart used for passage planning was using Bessel 1841 spheroids, whilst the GPS system was using WGS 1984 spheroids. The waypoints' coordinates planned in the paper chart then inserted into the GPS (using exactly same coordinate values).

The navigating officer continuously maintains the ship track following the waypoint setup in the GPS not the paper chart. However the ship track went close to a shallow reef and then grounded.

Why could two spheroid systems result in shifting of ship position?

Bessel Ellipsoid is 700 meters shorter than WGS 1984, check below:

The two axes a, b and the flattening ƒ = (a − b)/a. For comparison, the data of the modern World Geodetic System WGS84 are shown, which is mainly used for modern surveys and the GPS system.

Earth ellipsoid WGS84 (defined directly by a and ƒ):

We have models of the earth to express locations on its surface. Some try to fit globally (WGS84), others try fit locally (Bessel) a surface with a Normal Null. Because the world is actually no ellipsoid and we have undulations because of mass distributions inside the earth, we find different ellipsoid models for different countries etc. These systems have a geodetic datum describing the size and orientation of the ellipsoid, which then is a basis for geodetic coordinate systems, which are projections onto a plane with metric distances.

At least, different ellipsoids have different geographic coordinates for the same place.

When you pick coordinates from one coordinate system using one spheroid to another using another spheroid, they will not represent the same real world position anymore. The navigating officer should have requested coordinates from a map using WGS 84.

Alternatively a conversion between the two coordinate systems (Bessel 1841 --> WGS 84) could have been done before inputting coordinates into the GPS system.

Shown below is a sailing course laid between the two Greece islands of Paxos and Antipaxos USING THE SAMME COORDINATES, but projected using two different coordinate systems (using the spheroids WGS 84 and Bessel 1841, respectively). Notice that one of them lays a course grounding the vessel onto Antipaxos, even though the coordinates are the same for both lines.

What's the difference between a projection and a datum?

Geographic coordinate systems (lat/long) are based on a spheroidal (either truly spherical or ellipsoidal) surface that approximates the surface of the earth. A datum typically defines the surface (ex radius for a sphere, major axis and minor axis or inverse flattening for an ellipsoid) and the position of the surface relative to the center of the earth. 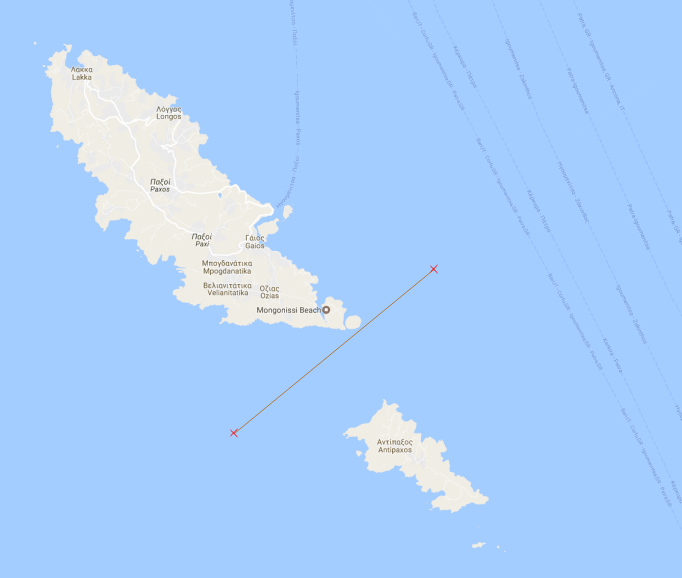 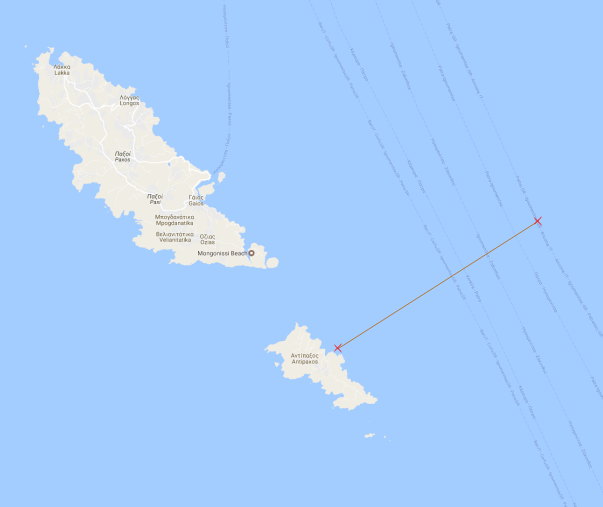 Additionally thhe navigator might have been following the wrong heading.

The heading should be constant between two points, and follow a geodesic (straigh line on curved surface) [red line on image]. Often, the heading is continually updated as the ship is moving between the two points when using GPS. The ship will then follow a path that is straight on the flat map [blue line on image], but curved on the sphere (and in the real world). 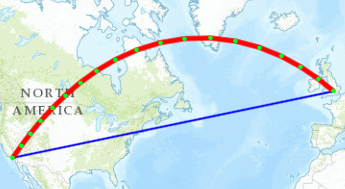 For your investigation you should inquire if the navigator was following the Grid heading or the True heading (with the latter being the correct heading to use).

It's not only the fact that the ellipsoids (spheroids) are different. An ellipsoid is part of a geodetic datum definition (AKA geographic coordinate reference system). The datum is a best fit using the area's control points/network.

The differences between two datums are often modeled using XYZ coordinates and leading to at minimum:

Bessel 1841-based datums often have relatively large offsets sometimes up to a few hundred meters where two GRS80-based datums are off a few meters.

Just knowing that the map is using Bessel 1841 isn't enough to do an accurate conversion WGS84 or another GRS80-based datum. Ideally you would know or find out the datum/geographic CRS.

233
Difference between projection and datum?