I'm involved in a project using GDAL via python.

We need to be able to calculate if, standing at point A it is possible to see point B, given a DEM. To clarify we do not need a viewshed algoritm, we would only like to know if there is a straight unbroken line from A to B.

You mention that you don't want a full viewshed (i.e. a raster output), which suggests that a simple point-to-point intervisibility is more what you're after.

There is a QGIS plugin called Viewshed analysis. As well as the usual raster options, this also has an intervisibility vector option.

If you have a layer with a number of points, scattered over the DEM, you can get it to draw lines between any pairs of points which are mutually intervisible, like so:- 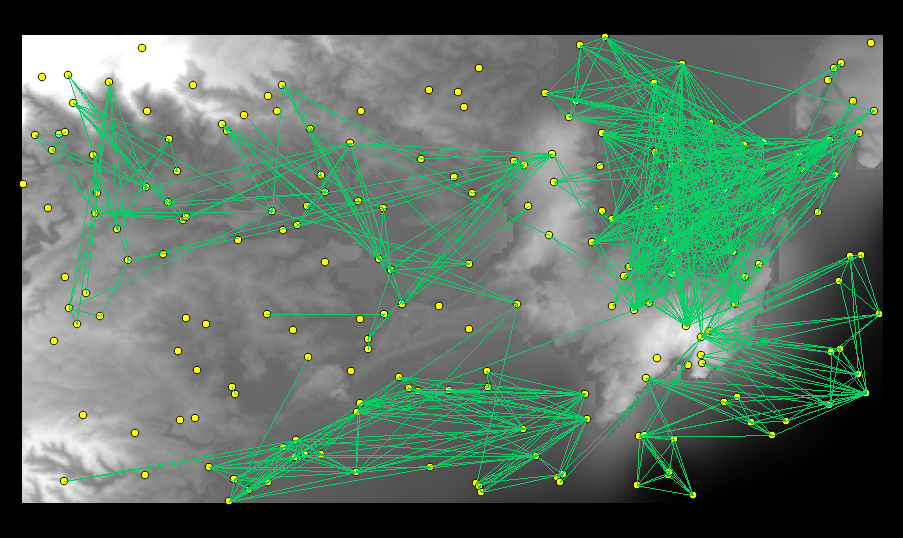 (in this case I added 200 points at random on a DEM, and chose to show only pairs which are mutually visible)

The options look like this. Make sure to choose a radius in Map Units, and make sure to complete both layer names - if you don't, you'll end up with one raster per point :-) 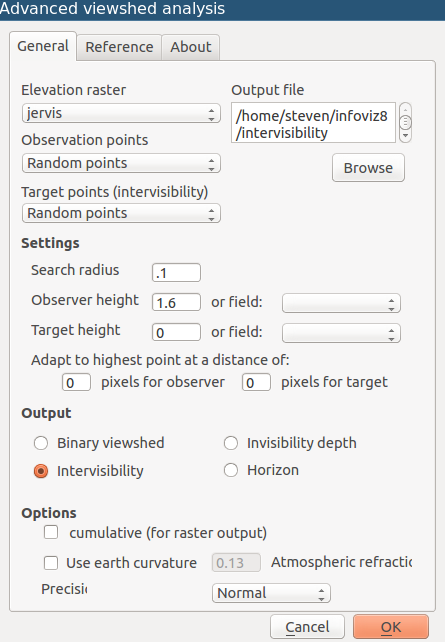 As it's a plugin, rather than a processing algorithm, it's not amenable to scripting unfortunately.. but it's open source, so you might be able to look at the source to see how this is implemented.

The code repo also has a .bib file with links to papers which might be of interest

Not the answer you're looking for? Browse other questions tagged gdal analysis or ask your own question.

4
Can I create blended images with GDAL command line utilities?
7
Per-pixel (statistical) calculations on a raster stack using GDAL
7
Identifying and deleting overlapping or near lines with similar running?
5
How can I blend DEM rasters with GDAL?
1
Array written by GDAL with Python script has numbers read as “nan” by QGIS?
0
Transforming arbitrary .prj to EPSG:4326 using GDAL for use with ogr_fdw