How to (re)install gdal in python3 (mac)?

I am stuck trying to install gdal, running python3.6 on a Mac.

When I run pip install gdal I get errors of

I previously had a working version on mac, using this answer. But somehow, in trying to install osmnx, I screwed up my libraries and decided to uninstall anaconda and start afresh. On the latest install I am resetting up and can no longer use networkx to read shapefiles

Which I suspect means gdal is not currently supported for 3.6?

This is over my head currently, so I'm interested to learn where I went wrong and what exactly is going on to prevent me from retracing my steps here.

Cleaned up my path after advice from gene. echo $PATH is now just

Even after running conda install gdal, I can not read the shapefile. I'm getting the error

This is pretty common, and the normal solution is to install gdal. But I've already done that. Even though the install runs fine, I also can't import gdal while in python, a similar error about libgdal.20.dylib. It looks like I have 2.0.0 for both gdal and libgdal, but it won't update (ie to 2.1.3, which it looks like gene has below).

You have a serious problem with your Anaconda installation: 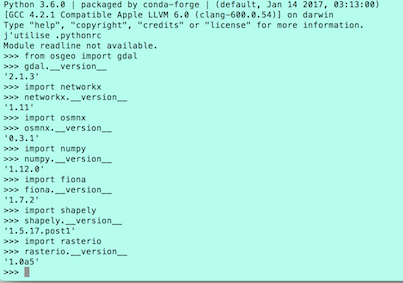 All the modules were installed with conda or pip and osgeo/gdal is well supported in 3.6.

Now, I'm not sure if this will help, but here's how I got gdal for Python installed recently.

Note, that I use Homebrew, which will further complicate your system, and really, I don't recommend it! For future reference, pick one install system and stick to it.

In order to install gdal 2.1 with Homebrew, you need to add the osgeo source. You can do:

After this I ran:

and all was good. (I tend to use pip3 to ensure that I'm using the right version of Python.)

If you DO want to follow the above, consider removing any other versions of gdal installed in other ways.

I had the same problem and this worked for me with Anaconda:

Not the answer you're looking for? Browse other questions tagged python gdal python-3 networkx or ask your own question.