Copying only certain Fields/Columns from shapefile into new shapefile using Modelbuilder in ArcCatalog?

I am trying to take a shapefile, with way too many fields/columns, and copy over only certain fields into a new shapefile.

Normally, I would just delete the fields I don't need from the original shapefile, but I don't want to come across an instance where the GIS operator decides to remove a field that my automated .py scripts is trying to delete, causing the program to fail.

At this point, I have not physically tried anything because every tool I have come across I have been able to find documentation proving it's lack of usefulness (Fields -> Transpose Field and General -> Copy).

Fields -> Transpose Field does copy individual fields but it transposes them from a column into a row appendage, which does not help.

I use "Feature Class To Shapefile (multiple)" to convert my features into shapefiles, and I tried looking into a "Feature to Shapefile" solo Tool that would let me pick the columns/attributes of the feature to convert. That has so far turned up empty as well.

I am using the ArcCatalog ModelBuilder to perform this task, not raw Python scripts. I know enough Python to go that route if needed, but a Toolbox Tool is the preferred goal. This task will be part of a larger whole that will be run via a batch file calling the exported Python code from the Models. It has to be something that can be run automatically, so manually copying/pasting is not applicable.

As for a screenshot of the Model, my current setup has each task as individual models: one model copies rows, one creates shapefile from feature class, one adds a field, one populates that field, etc. I'm sure this is probably inefficient but this task has been passed on to me from someone else and this was how it was done. I can add screenshots of the other models I have but I'm not sure what use that will provide, as it doesn't give much of a context.

Basically, I'm looking to do something like Copying data from one attribute field to another using ArcGIS Field Calculator? but with about 10 different fields. I don't want to do them individually, but using one or maybe two tools.

You can take advantage of using a FieldMappings parameter type. There are many tools that support this, you probably want to use the Feature Class To Feature Class tool (which also works on shapefiles). You can alter the field map there for use in Model Builder.

If you are using Python, you can pass in a list of fields that you want to keep like this:

I know you can also use the DeleteField tool, but I have found that to be very slow in tables that have lots of fields.

To avoid the need for scripting and to do this quickly do the following: Open ArcMap and add the shapefile to a blank or existing map. Open the layer properties of the shapefile (double click the layer or right click the layer and choose properties), go to the Fields tab, turn off the visibility of all fields (the second button above the field list outlined in red below) and then turn on the visibility of just the fields you need by checking the box next to each field name. 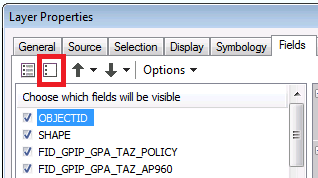 At this point all the fields will be hidden in the tableview of the layer, which may be all you need if you don't really have to actually delete all of the fields, just hide them in a particular map.

To fully remove the fields right click the layer in the map's Table of Contents (the layer list) and choose Data-> Export Data..., set the output location and shapefile name, and press the OK button. This will copy the layer features to a new shapefile with just the fields you want.

ModelBuilder can do the same thing as the layer properties using the Make Feature Layer tool and its field list and all other tools that take a layer as input will respect the field list whether or not the tool that takes that input supports a field list.

Not the answer you're looking for? Browse other questions tagged arcgis-desktop arcgis-10.2 modelbuilder or ask your own question.

2
Copying data from one attribute field to another using ArcGIS Field Calculator?