I would like to combine data sets from 2010 which use 2000 geography with 2011 data that use 2010 census geography. The data is from the contiguous US and is either at block or block group level. I am trying to get a sense of:

I've tried to locate this information on the Census homepage as well as this site, but I am not sure if I am using the best terminology in my search.

Based on Census Bureau's explanation:

"A census block group (BG) is a cluster of census blocks having the same first digit of their four-digit identifying numbers within a census tract. (See also Census Tract.) BGs generally contain between 600 and 3,000 people, with an optimum size of 1,500 people..."

Therefore, the shape/boundary of a block group could be changed between 2000 census and 2010 census depends on the increase/decrease of the total population in that area.

Actually, if you look at the following fact you will realize that there is a significant change in the Census Block group between 2000 and 2010 census:

As a result, I would not suggest you to merge those two datasets together because by doing that can yield inaccuracy and it might not be able to reveal the truth. I strongly suggest you to download and use the most recent data in order to get the most accurate result. (However, if you really wanna merge them together, maybe you can try to join those two datasets by using a field named "GEOID2").

Here is an article provided by Esri, and it gives us a very good example about why accuracy and currency matters in our data: 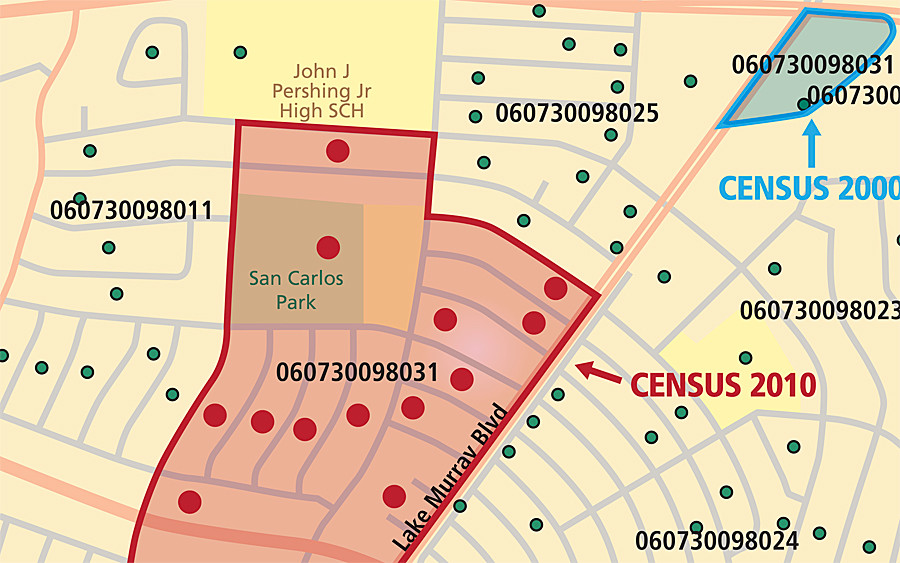 The map above shows us a fact that the Census Bureau can add new block groups to the inventory but also change the locations and boundaries of existing block groups. Here, Block Group 060730098031 (outlined in blue) shows its boundaries and location in Census 2000; dark red outlines its location in Census 2010 geography. The geocode is identical, but the boundary is completely different. Therefore, performing population or housing unit analyses with current data or projections using Census 2000 geography would yield completely inaccurate results.

It's going to be difficult to impossible depending on how big of an area you want to do. Block Groups are not a geography that the Census Bureau worries about maintaining for comparability (Tracts they try to keep comparable). You'll have to reaggregate blocks from 2000 to match 2010 Block Groups.

Not the answer you're looking for? Browse other questions tagged census geography or ask your own question.