I'm having trouble editing text in a pop up window for a layer I have in CARTO. 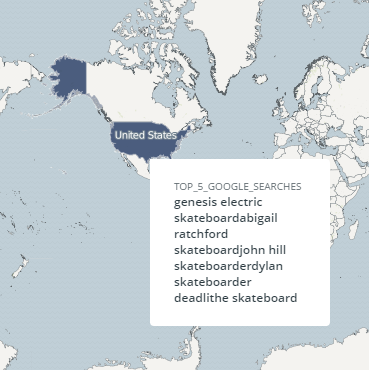 The data in the pop up window comes from an Excel spreadsheet. I would like to know if there is a way for me to create line breaks in the window so that the separate terms in there remain separated on their own lines. For example, the first term is 'genesis electric skateboard' and the second term is 'abigail ratchford skateboard.' I need those terms on their own lines, but as is they are running together.

I tried creating line breaks in the Excel cell using Alt+Enter but that doesn't make a difference when I import that sheet to this layer.

I would also like to know how to adjust the width of the pop up window so I can fit the entire term like 'genesis electric skateboard' on one line without it wrapping to a line below.

I would also like to know how to adjust the title of the pop up window to get rid of the underscores between the words TOP 5 GOOGLE SEARCHES.

The CARTO pop-ups render the content of the cells as HTML text format.

I would recommend writing the HTML tag <br> in the cells text to create the break lines when the information of the cell is displayed within the infowindow.

For example, in the dataset view you write some<br/>text, the infowindow will show

Not the answer you're looking for? Browse other questions tagged carto or ask your own question.

1
Name of the node and search box cartodb
1
Placeholder Text in search box - Cartodb
0
Link to an individual info window in CartoDB?
0
How to see what the equal interval breaks are in order to add them to the CartoDB Legend
1
Getting text box to stay put in CartoDB?
3
How to make a fixed block of text in cartodb instead of infowindows?
0
Prevent text truncation in Carto map
1
Fixing line breaks in cartoDB infowindow?
1
Importing from a PostGIS database into Carto using Carto's Import API