My Openlayers application can display tiled rasters from arbitrary online sources. It will parse capabilities from any user-specified URL for WMTS, TMS, OSM, XYZ or WMS services and present the user with a list of available layers which they can choose from.

Many of these layers are only available in standard resolution, but most of the users will be using Retina or high DPI screens. The result is that the map features are all too small, thin and spidery looking and text is very difficult to read for people with standard eye sight (impossible for anyone with aging eyes).

Is there some way to get Openlayers to display these standard resolution tiles at double the resolution (or x1.3 or x3 or whatever the screen scale is)?

I know this would make the rasters look a little blurry, but in theory no more so than if they were displayed on a standard resolution screen. At least they'd be big enough to view/read properly - and I can give the user the option of whether to use this feature or not. I've verified that the rasters look fine at double size by magnifying the view in which they are displayed by 2x, but of course this magnifies everything else in the web page too, which is undesirable Eg, widgets are double-sized, vector layer symbology gets blurry.

I can easily scale vector symbology, just my multiplying the various width and size parameters by the screen scale factor (this is tested and working), but I cannot do anything similar for rasters. So I think the best work around would be to show them at double size. Eg, grab the tiles that would normally be used if zoomed out by 2x and display them at 2x their actual size.

It seems that this should be possible but I can't figure out how it would be done. Perhaps redefining all the layer's resolutions and setting tilePixelRatio = 0.5 might be part of the solution, but my Openlayers knowledge is limited and I'm not sure if this is even on the right track.

I expected a lot of other people must be trying to deal with the same issue, but I've been unable to find any information that fits this scenario.

Is this possible? How can it be done?

JSFIDDLE UNSUITABLE TO DEMO THIS ISSUE:

I have created a jsfiddle to demonstrate this ( https://jsfiddle.net/nsands/n3cbwr95/20/ ) but jsfiddle is not suitable in this case, as it and/or iOS does its own strange scaling on the iPhone retina screen. With iPhone in portrait mode, everything is too tiny (not just the map, but even the HTML and Javascript panes have text that is unusually small), and when in landscape mode, the map text is large enough, but appears to have been scaled up (it is blurry - actually the kind of behaviour I WANT to achieve elsewhere, but only for raster layers).

ACTUAL DEMO OF THIS ISSUE:

However, this issue can be demonstrated using the WMTS example on the Openlayers examples page at: https://openlayers.org/en/latest/examples/wmts.html

I've loaded this up on both a standard resolution desktop PC and on a 'retina' (HiDPI) iPhone 6S and focused on the same location at the same zoom level on both devices. Below is what it looks like on both (note that the retina image is actually double the resolution shown here, but is the same size as shown here - and it is the size of the elements that is the problem for me).

OpenStreetMap uses fairly large fonts when rendering its tiles. Some map services (such as that provided by my state government) use smaller fonts, and are completely unreadable in Openlayers on retina/HiDPI screens (ie, https://services.thelist.tas.gov.au/arcgis/rest/services/Basemaps/Topographic/ImageServer/WMTS/1.0.0/WMTSCapabilities.xml ). 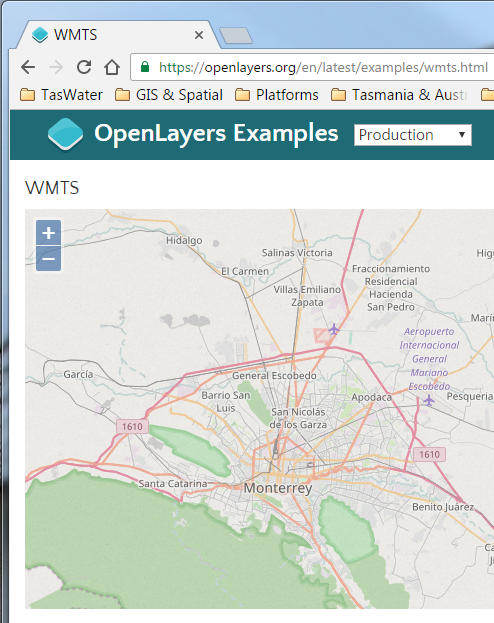 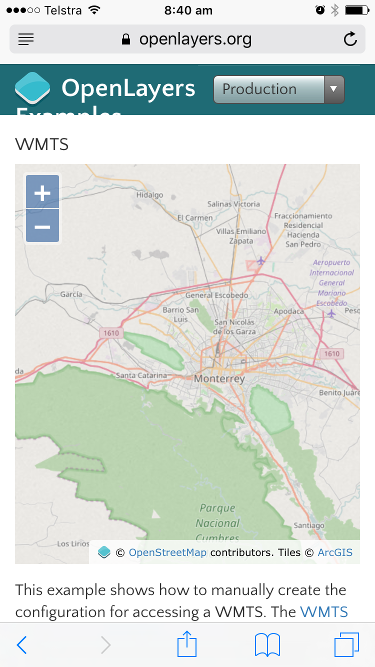 From v3.20.0 right through to the current v5.0.3 you can set fake resolutions and tile sizes in the tile grid proportionately scaled up and down relative to the real ones and OL will render those regardless of the actual tile size. Here's a simple demo based on your jsfiddle. http://mikenunn.16mb.com/demo/tasmania.htm

It's seems to be an undocumented feature and earlier versions of OL3 rendered using the real tile size received from the server so the result would have been a mess. I've used the technique to fix problems with reprojecting raster layers where OL typically chooses smaller areas (i.e. tiles from detailed z levels) to suit its reprojection algorithm but at the view resolution the resulting compression makes them illegible.

There's no coincidence about the location, it was based on your jsfiddle example. I've now taken a copy of your function and extended it to work for OSM, XYZ, WMS, WMTS and Bing. You are right about OSM, the constructor is simply shorthand for an XYZ source with

However, those properties can be read back regardless of which constructor is used (the url will be converted to a urls array).

getTileSize() and getOrigin() actually take an argument (the zoom level). In some services for non-3857 projections there are sometimes different values for each level. It's even possible to have tiles which aren't square. I've converted everything to arrays to be compatible with those. Also the slicing technique isn't compatible with non-3857 services where the resolutions can be irregularly spaced, instead each element of the array needs to be divided by 2 (also dividing means a different scaling constant could be used). For Bing it was necessary to separate the construction of the returned layer and the setting of the source in the layer via a callback as Bing sources load asynchronously.

The only limitation I've noticed is that OL fails to read Bing attributions when using OL 4.5.x and 4.6.x, which I eventually discovered was due to an OL change where the new functionality is only available using ol-debug.js. Apart from that it now appears to be compatible with OL 3.20.0 through to 5.1.3 (using full builds of OL5). It even works with my UK Ordnance Survey OpenSpace setup, an unusual service with parameters changing at each level which needs customisation ( original maps at http://mikenunn.16mb.com/map/ol3-os-map-basic.htm and http://mikenunn.16mb.com/map/ol3-os-map-basic-wms.htm ) although the pure WMS implemention where changes are needed after the layer is created does need to access the original source to do that, which can be now done from the new source via .get("originalSource").

You also mentioned WMS in the original question. That can also be done but is slightly more complicated since OL would pass the (fake) tile width/height to the WMS service. First problem a cached WMS service restricted to one size might not accept the request, and second problem with a bigger tile there would be no magnification. I've always got around that by setting up the WMS layer as an XYZ layer and simply added the bbox to a tile url preset with the other WMS parameters including the real tile size. But that wouldn't be practical for dynamically created layers. Instead you would need to wrap the default WMS tile url function of a proper WMS layer inside a custom tile url function which resets fake tile sizes in the url back to real sizes before it's used to load tiles. Here's a reworked example using both techniques http://mikenunn.16mb.com/demo/tasmania-wms.htm Hopefully you'll see from the source what I've done better than I can explain in words.

This answer is essentially an expansion and (hopefully) an improvement on @Mike's answer(s). I found that the solution I had been using no longer worked for some WMTS sources, after reworking my WMTS code to better fit in with some changes after upgrading from OL 3.x to OL 6.5.0. The WMTS solution below should work for any WMTS or XYZ source, I think.

Note that my project needs allow for dynamically created layers, where the user inputs the details of the data source (eg, the URL template, for XYZ tile layers, or the capabilities URL for WMTS then select from layer name and matrix set ID). AND it must work for XYZ (inc., OSM), TMS and WMTS. Therefore I have to develop solutions for all 3 of those tile layer types (plus WMS as well).

My working solutions for XYZ (inc. OSM) and WMTS tile layers are below. I still need to refine this solution further for TMS and (tiled) WMS, but similar principles should apply there (ie, multiplying the tile sizes by the scale factor and dividing the resolutions by the scale factor).

(These functions do share some code, which should probably be broken out into a separate function called by each of them.)

to your page may be useful. As you can see from the below scrennshot, it works fine on Apple Devices. 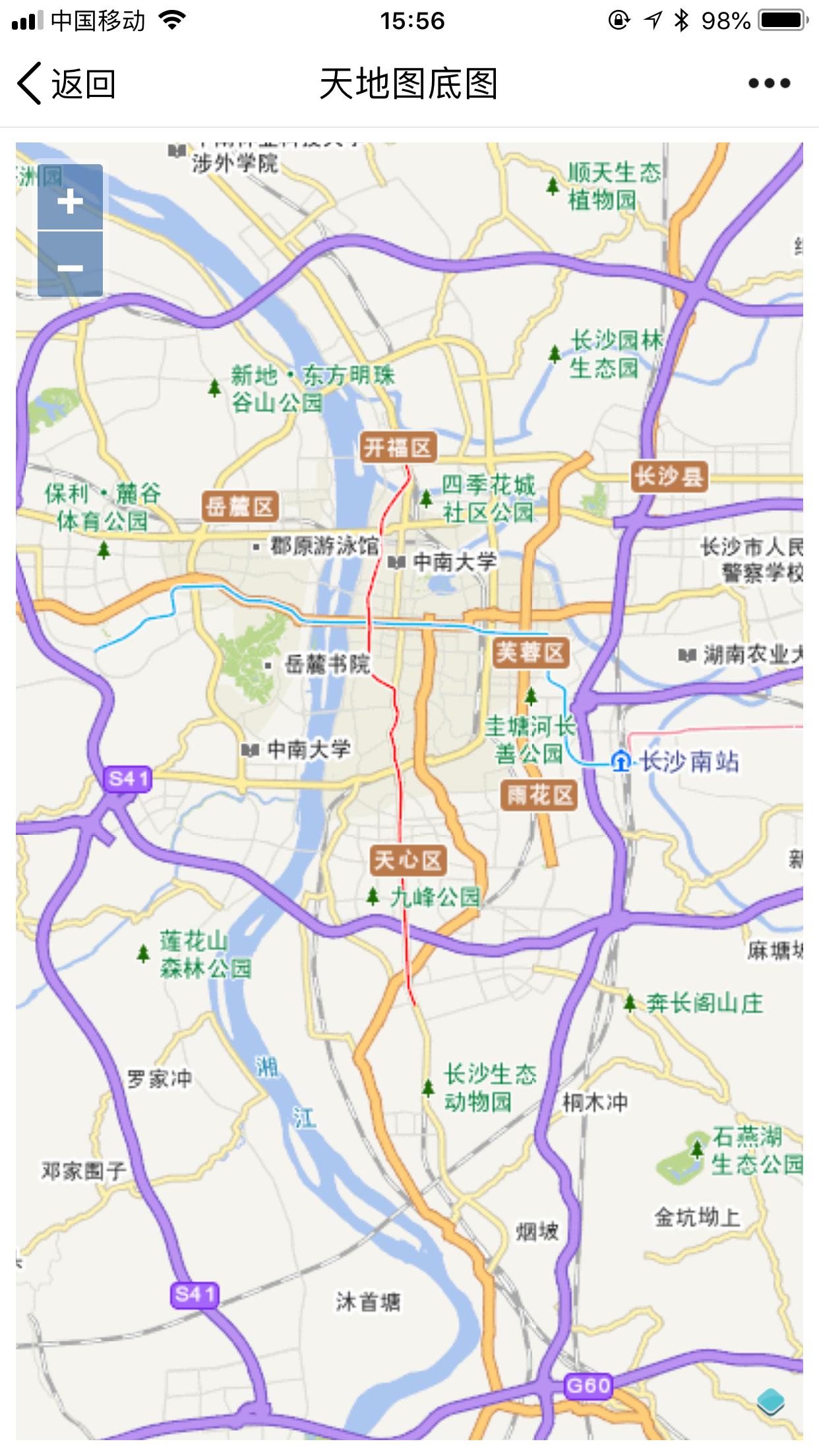 Not the answer you're looking for? Browse other questions tagged raster openlayers tiles retina or ask your own question.