How can I keep labels in the same layer from overlapping in QGIS?

In QGIS (2.14.0) I have a polygon layer I need to show labels for, but often the polygons overlap. I need to see the labels for each of the overlapping parts but when the two polygons are coincident, the label gets placed in the same location and overlaps one another.

In the image below the three south western parcels each have "2-Ground Oriented Infill" and "17-Coach Houses" overlapping polygons, but labeling engine has drawn "17" first on one feature and "2" first on the other, so they look mismatched but should all be the same according to the polygon colour, ideally both "2" and "17" labels should show and not overlap. The south eastern polygon doesn't overlap as "7-Riparian Areas" is a different polygon shape than the overlapped "17-Coach Houses" in that case". 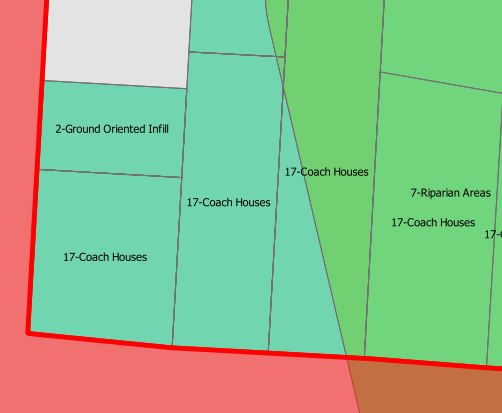 I ended up using a workaround by forcing the labels into separate layers. First I duplicated the layer in question several times so that i had one copy for every label type required (ie. each unique value in an attribute). then I filtered each layer to just the necessary value and labelled it. In each layer the properties were set to display colliding labels, etc.

The benefit of all this was not just that the labels move around each other because they are in different layers, but i can also now label each value slightly differently instead of all the same text.

A bit klunky, and only really useable if there are not a ton of unique values, but it worked.

5
How to create non-overlapping street polygons from centerlines?
5
How to show labels for all polygons in a layer, even with 'NULL' values?
4
Preventing layer's labels from overlapping other layers in QGIS?
2
How to show Labels on Geoserver, only if they fit within the Polygon?
4
Stop labels from overlapping in QGIS?
3
QGIS Data defined labels within a single layer - prioritize display
2
QGIS - Use one layer to block another layers labels
7
Correcting the geometry of overlapping polygons in the same layer in QGIS