Transforming lines to polygons not working in QGIS? [duplicate]

I'm facing a problem with a process which should be straight forward, namely transforming a bunch of lines sharing their end nodes to a polygon.

The thing is, it just does not work. I tried a dozen of methods, went through validation and cleaning steps to make sure the data is OK, read dozens of online contributions, tried them all, and so on and so on, but there seems to be something intrinsically wrong with the data that makes it impossible to fulfill this simple task.

I could describe all the variations I went through, but I decided to share the shapefile for whoever is available to check what the problem with the data is.

I would be very pleased to learn from you, what the clou is. Even some colleagues with many years of experience with QGIS and GIS in general were not able to find the problem.

So, since I have been asked to be more specific with my problems, here it goes.

History I digitalized several features of satellite images using a 'line' layer. Since these features represent the border of management units and I want to transform the layer to a polygon layer, I made sure, that the last node of all lines coincide with the first node of the next line.

So, I end up with a layer with 213 individual lines (i.e.213 attributes), which looks like this (by the way, I realy made sure, that all end nodes coincide. 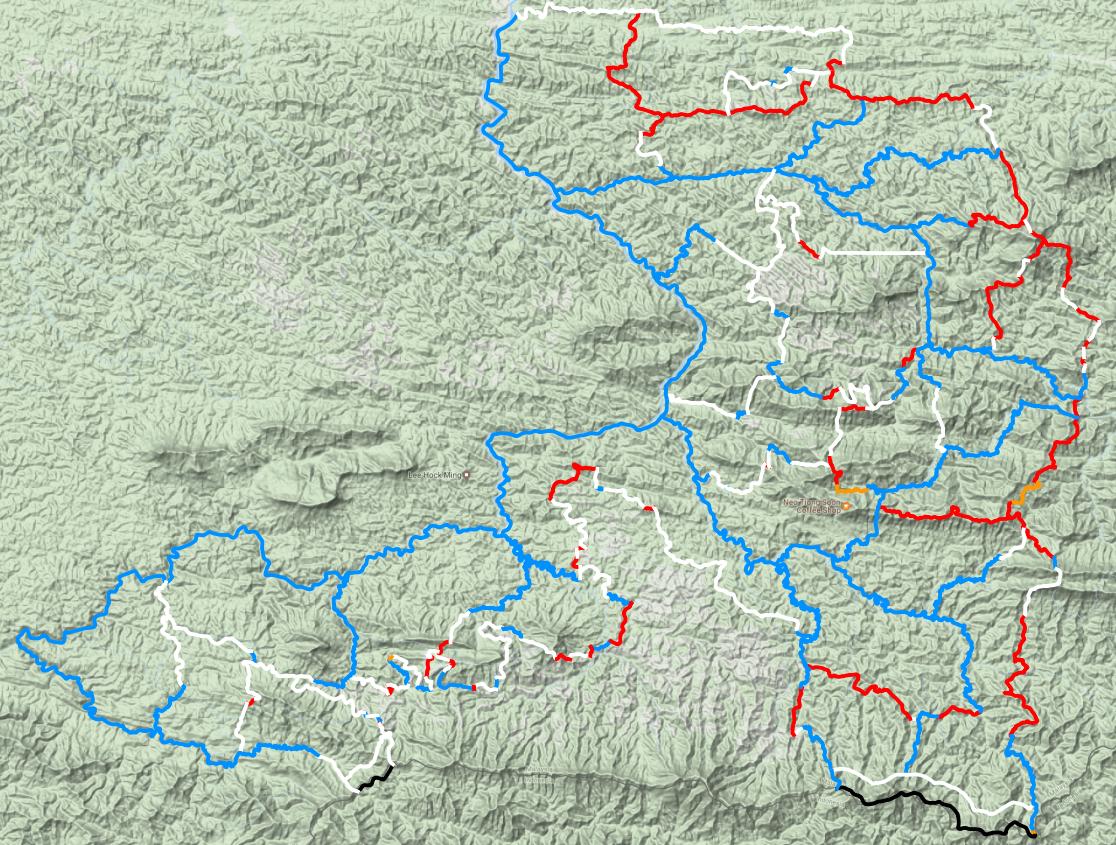 I will call it START_LAYER from now on.

My goal: Transform these lines into a polygon.

So, that simple tasks turns out to be impossible, and I do not understand why. 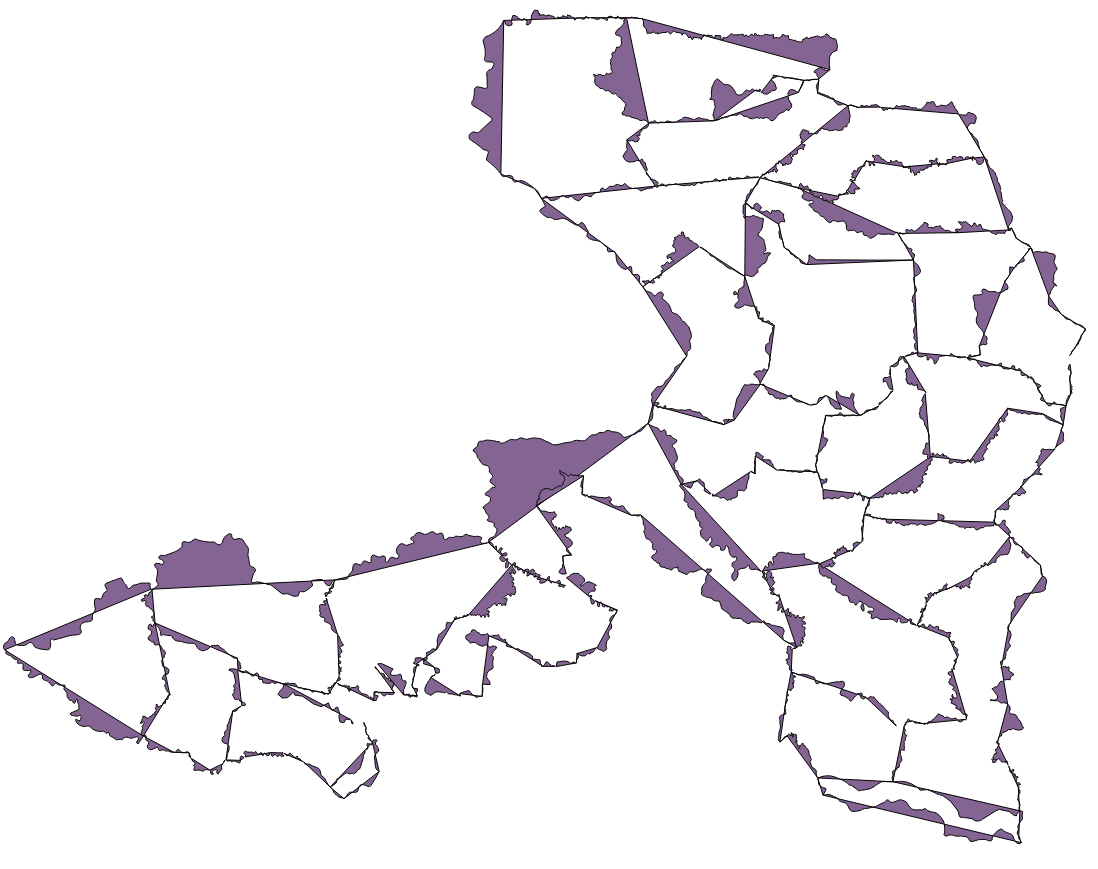 I thought, Ok, sure, I have all individual lines, sure it will not work, so I went over to...

... where I marked all lines (attributes) and merged them using the Merge selected features tool.

I end up with one attribute (I'll refer to it as LAYER_2) Go back to Var. 1 and create the polygon. The result looked like the first one, but the result was different (two different colors in the next picture). Any how, it was not what I was looking for. 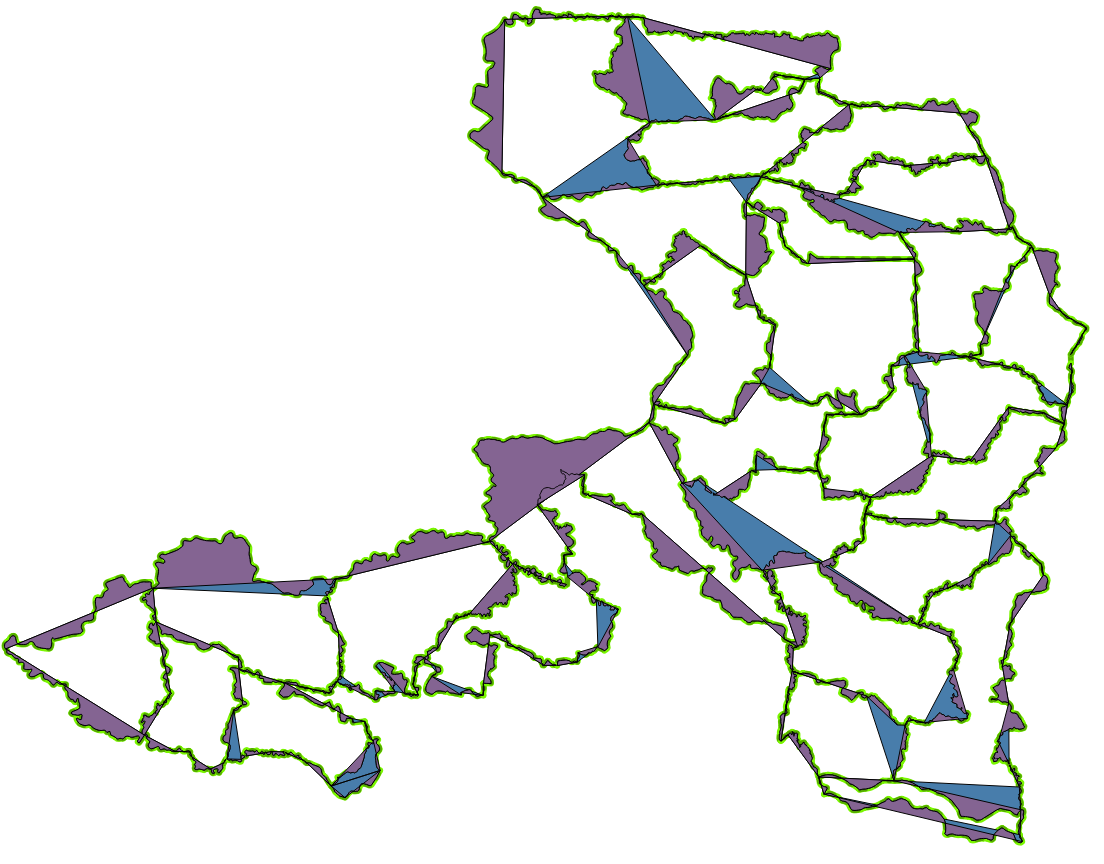 Ok, it has to work in a different way.

I went to to do the Geometry Check (tried different parameters, the result might be different, but the following problematic seems to be the same) and tested it on LAYER_2.

Ok, 1) duplicate nodes, that makes sense, since each original line contributes with a node in the intersection point (just strange, having 213 initial lines, why only 51 double nodes?) and 2) Error = Geometry type (MultiLineString) - what ever that means (I still did not understand it).

OK, first get rid of the double nodes. Using the automated fix works for some, but not all.

Mmm, ok, so I'll just do it manually, which however is not really possible, since I just have one attribute.

But well, if I address then the second error "Geometry type (MultiLineString)" by running the proposed solution, several attributes are recreated, funny enough, more than I had initially. (apparently new double nodes appear which did not exist before)

Now I go and remove the double nodes by hand. (LAYER_3)

Variant 4: Take all the variants attempted until now an play around with the function Merge Lines available in the menu point Vector. THe result, nothing new.

Note: By the way, I also cleaned my layer also via Check validation, but in the meantime it is clear, that the result has nothing to do with double nodes or similar stuff.

Variant 5: Go through the process using Polygonize. It doesn't matter what I do here (i.e. which way I go until I go for the last step to generate the polygon), the tool just shows 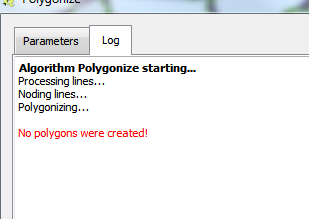 I did try to recreate the process which lead me to the START_LAYER, i.e. creating lines with common end nodes and then I apply Polygonize and it works perfectly. Not with the START_LAYER.

and then use the plugin

to generate the polygon form the points. 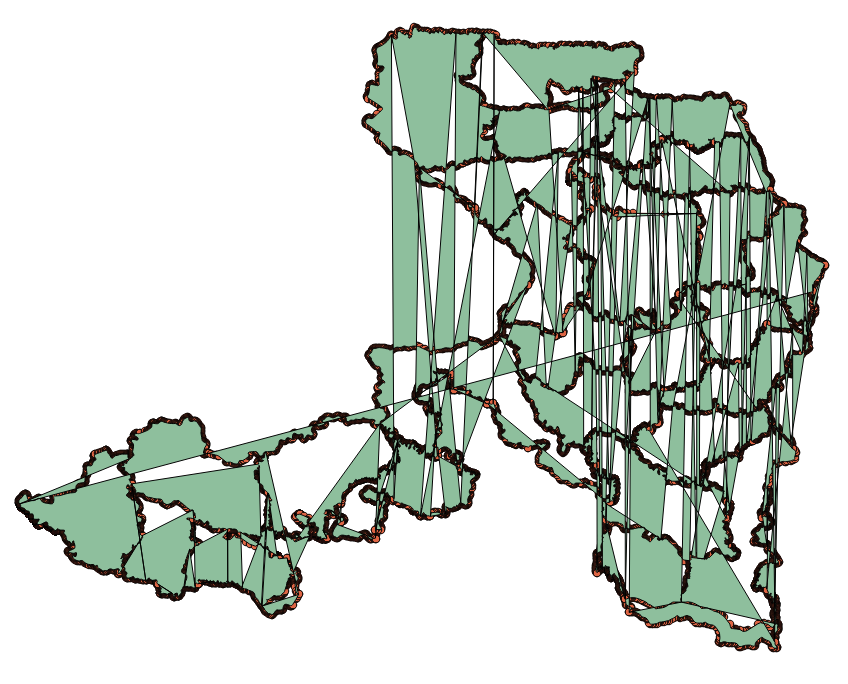 I try it only for one segment 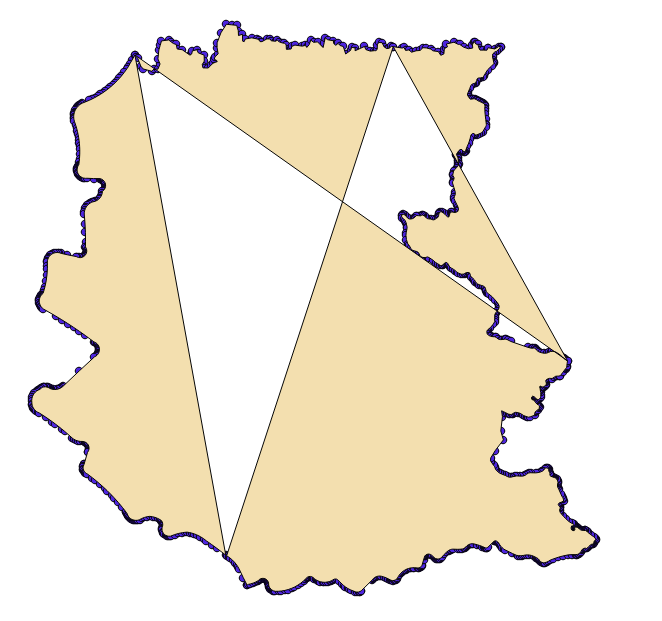 I tried the plug-in for a data freshly created first lines, then node extraction, then polygon creation with the Points2One plug-in and it works fine.

It is as if some intrinsic value of the nodes is messing up every step I try. Some time-stamp, etc. I do not know, I really do not understand the system in depth.

I did try other stuff, which I will not explain now , I think the point is more than clear, probably I was redundant with some explanations.

What I really want to use is the Polygonize which normally works sooo well with fresh data.

So that is why I shared the data so you can try to understand what is wrong (or what I AM doing wrong) with it.

The full data set can be downloaded here:. This line shapefile should be free of double nodes or some other type of error according to the validation functions in QGIS.

Since QGIS is not able to solve polygonizing in an easy way, I use the Openstreetmap editor JOSM for such things. In QGIS, convert your data into a GPX file setting the FORCE_GPX_TRACKoption to YES.

In JOSM, load the GPX file, and convert it to a data layer. Then select the lines that should build a polygon, and create a new relation of type multipolygon from it. You might add landuse=forest to get a reasonable tagging.

In the relation editor, you can order the elements. In most cases, they will not yet chain. You have to merge the end points manually, then re-sort.

In some cases, you have to split lines where three polygons share one point, but one line continues. At least two points were too close to each other, so I had to merge them too. And there were still some gaps, and dangling line ends.

If the lines close, you get a loop in the relation editor. You might run the check tool of JOSM as well, before saving to a local file. DO NOT UPLOAD ON EXITING JOSM.

Then you can load the .osm file back into QGIS with Add Vector Layer or the QuickOSM plugin.

The Polyline with FID=4 has 3 parts. There is a 22 meter gap between part 1 and part 2. This is the only gap in the data. 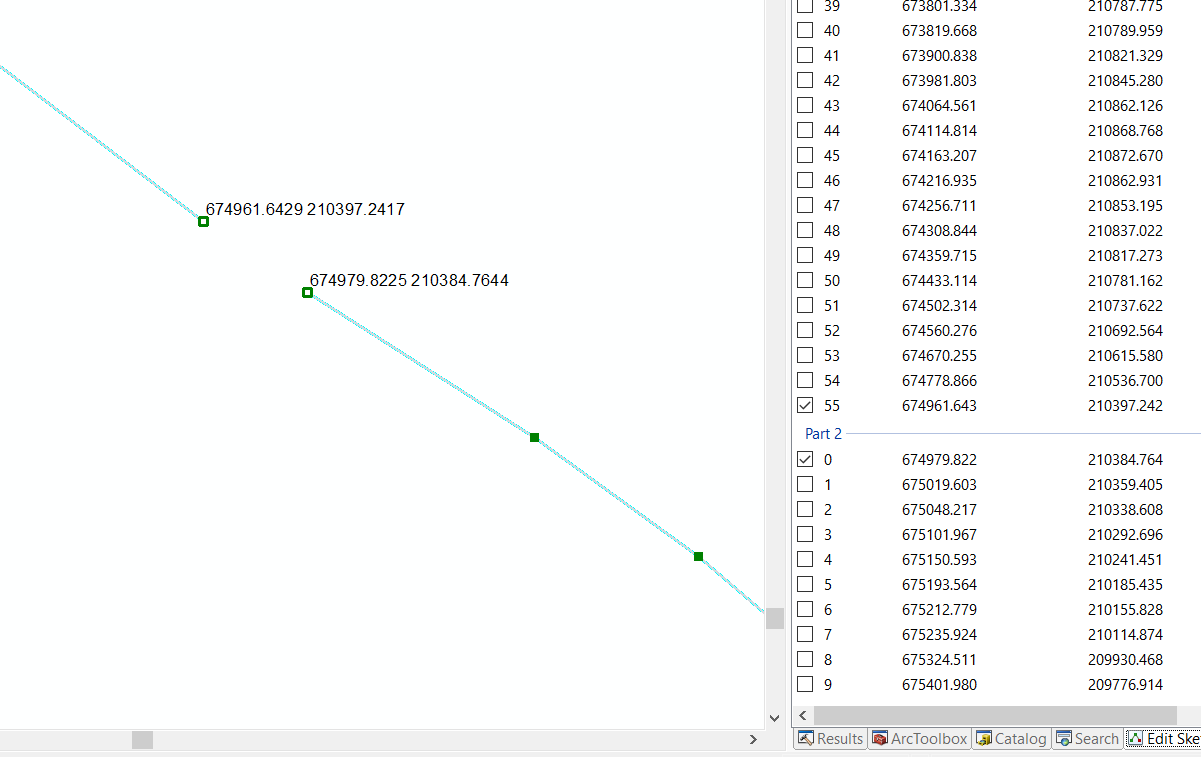 I downloaded test shapefile and it originally looks like: 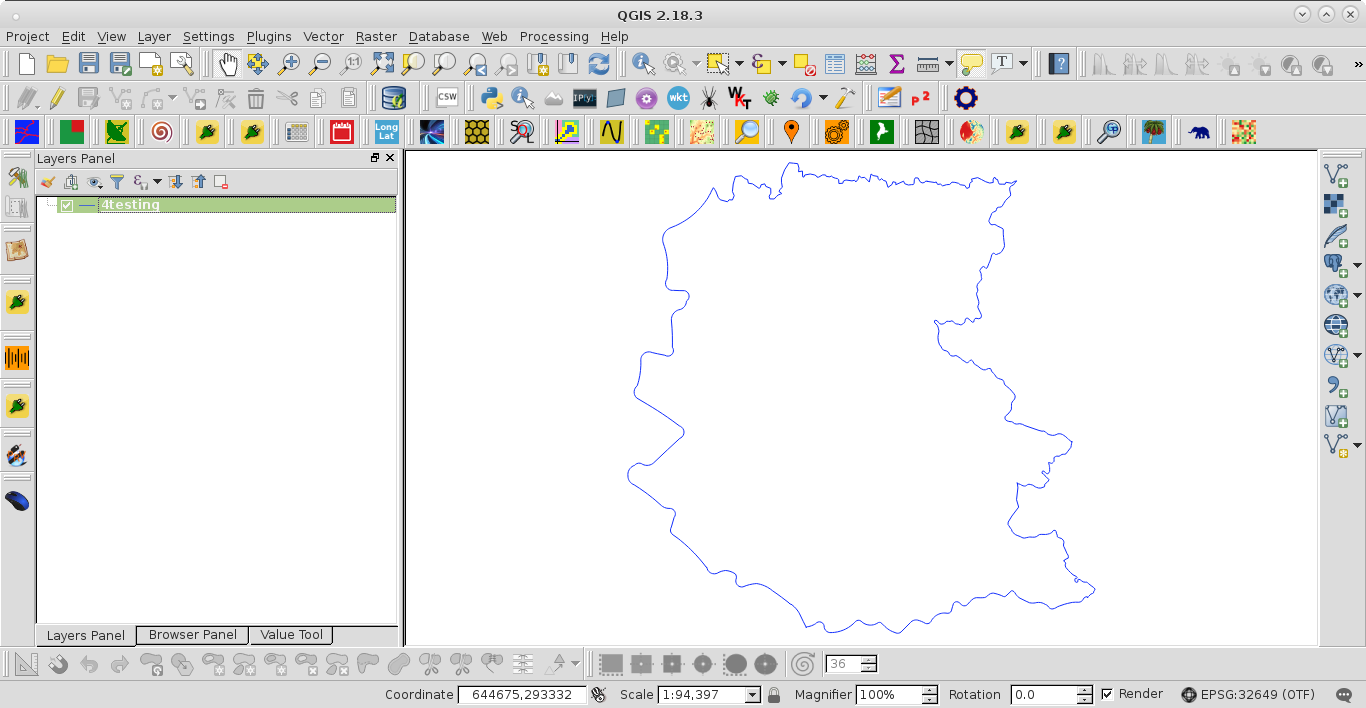 and after using "Lines to polygon" method of Processing tool box of QGIS looks as: 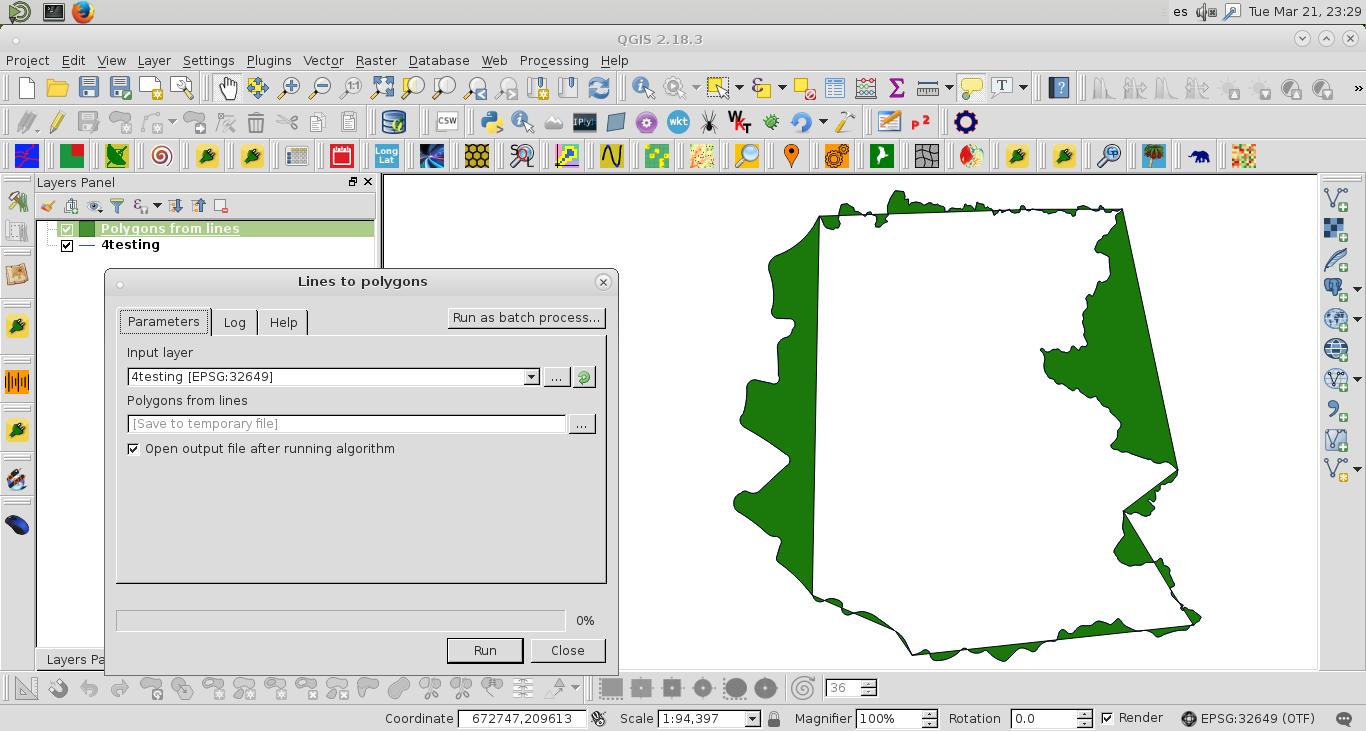 Obviously, there are problems with it.

On the other hand, when two consecutive features are selected at attributes table they are no showed in this way at the Map Canvas. 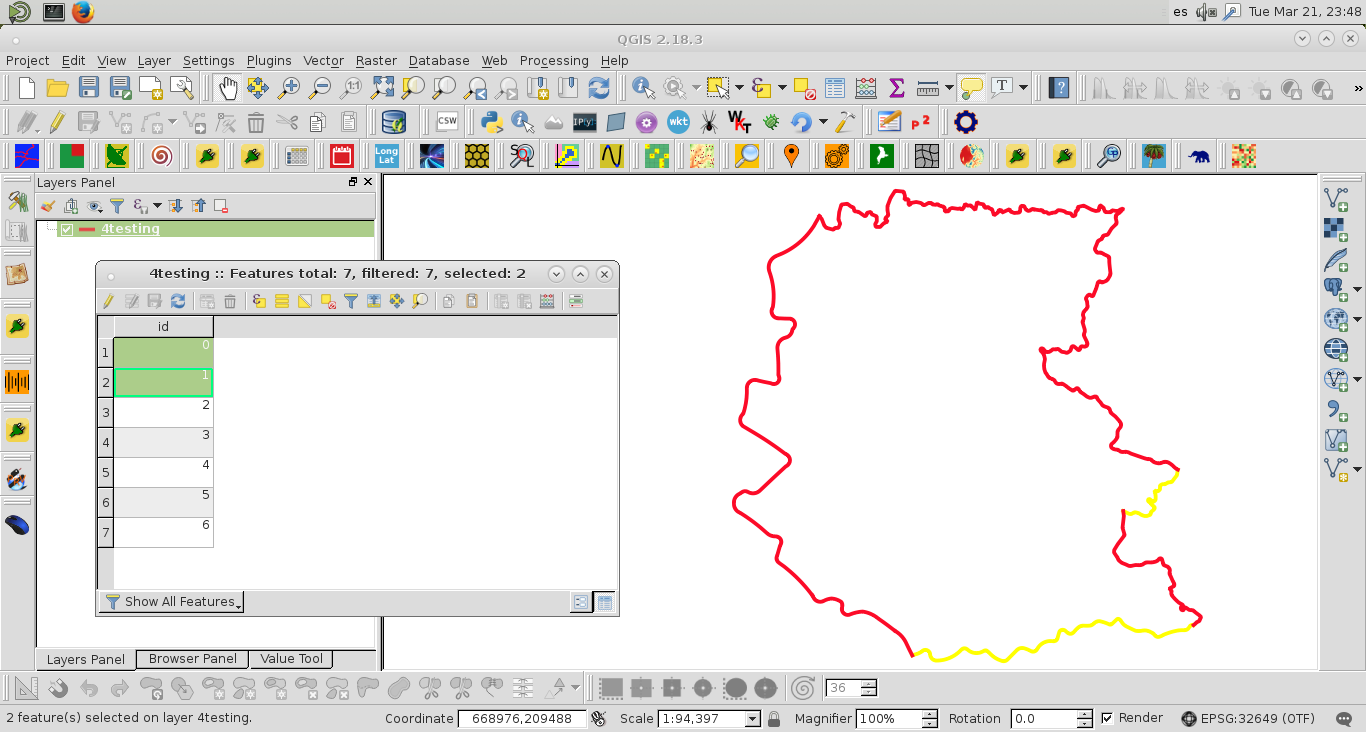 As @klewis pointed out that "There is a 22 meter gap between part 1 and part 2", I used next PyQGIS code to evaluate how many gaps are in the geometry.

After running it at the Python Console of QGIS, I got:

suggesting only minuscules gaps and not 22 meters gap. So, there are features that are intrinsically multiparts.

By using "Multipart to singlepart" method of Processing tool box of QGIS this was corroborated and above code was run again to produce next result:

Now, it can be observed 22 meters gap.

By using "v.clean" method of Processing tool box of QGIS with snap option and threshold 30 m, I got a layer without gaps; as it can be observed at a new execution of above code:

However, gaps are not the cause of problems. So, I used next code:

for ordering features in a new memory layer; as can see at next image: 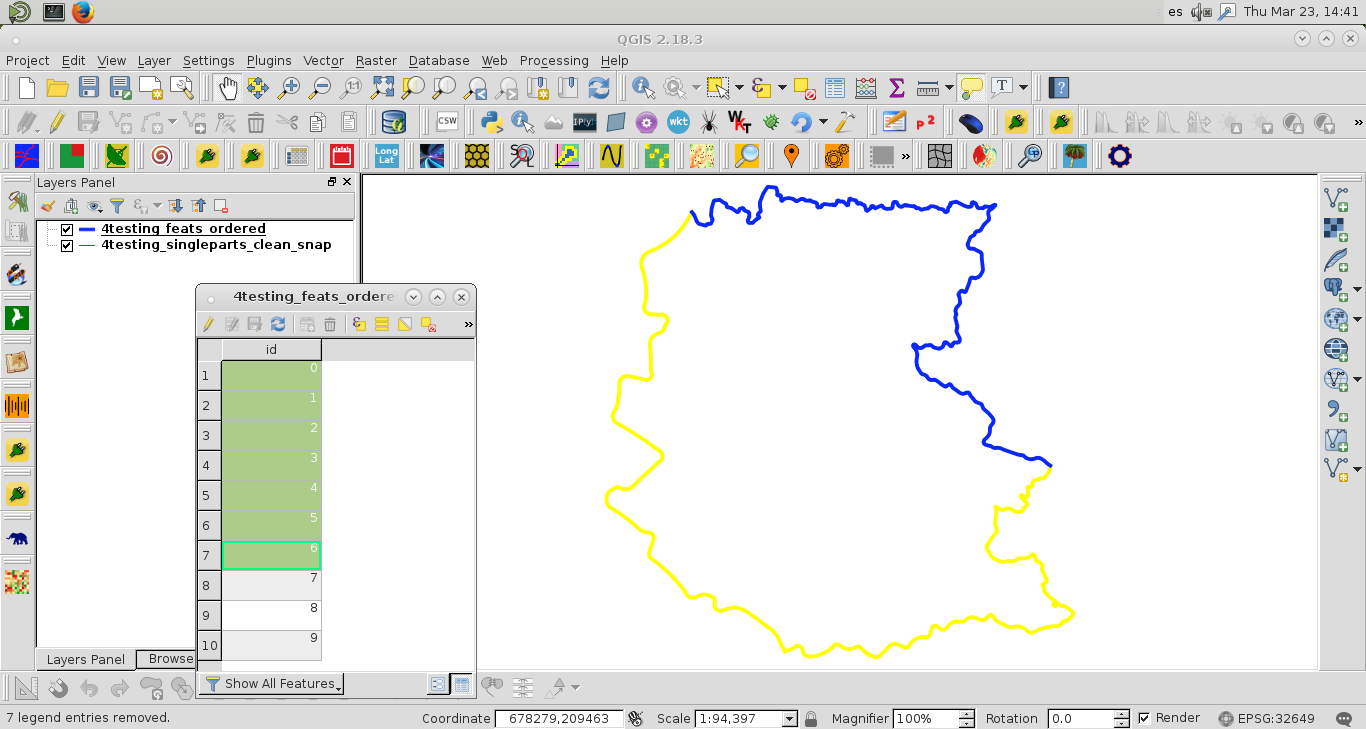 as can be observed at next image (desired polygon): 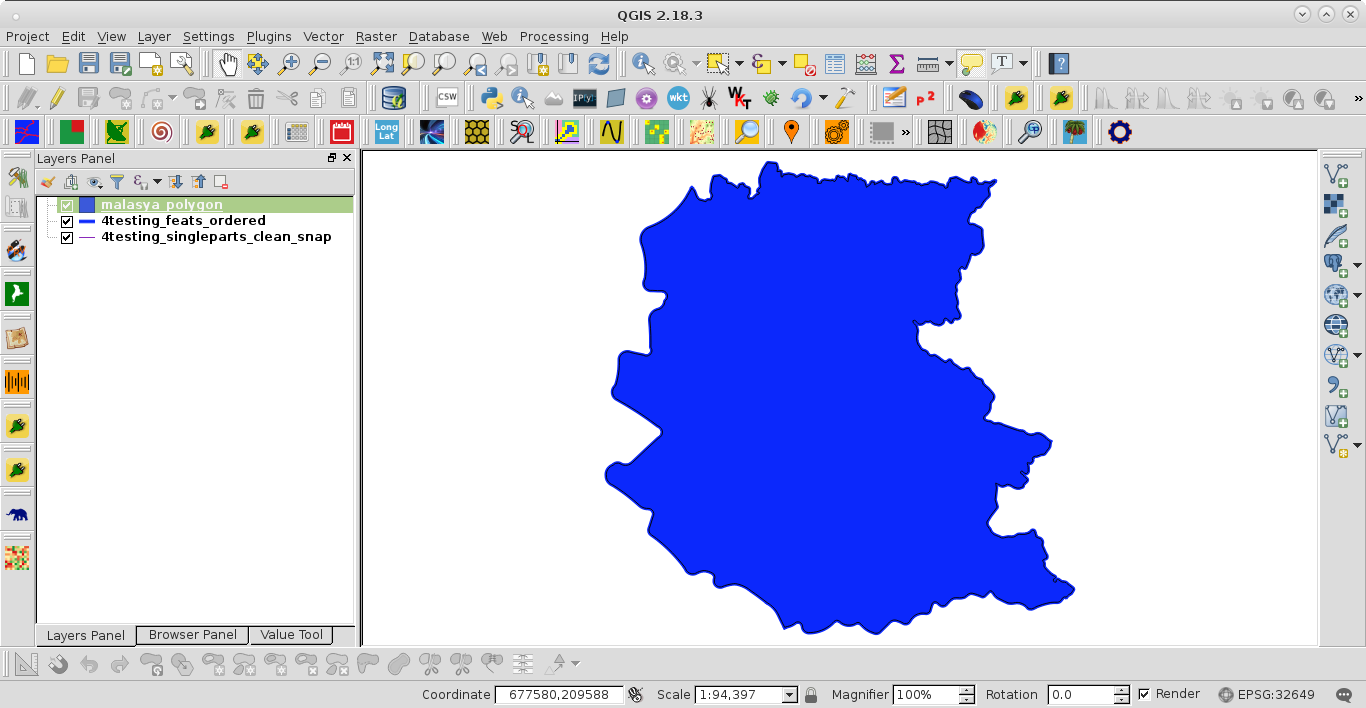 Unfortunatly i couldn't get QGIS to do this. However ArcGIS can do it, here is the easiest way i found...

edit: forgot to mention to close the gaps, i did this in QGIS using the topology checker and setting it to "find dangles".

OK, I don't have QGIS experience, so I am using other tools to look at your data. You say the end nodes now match, and that's true... but not totally true.

For example, you have one line who's start point is at:

While the line that should connect starts with:

Here's what I did using FME.

Basically I intersected the lines (because some lines pass through a boundary) and picked out the example you showed above. All I did was round the coordinates to 4 decimal places. That removed the difference in coordinates. Then I can build that area feature.

So if you can round off the coordinates (maybe not to 4, but to a few less decimal places) I figure it will be much improved. Maybe QGIS has a precision setting that can be used???

Also, I said before that there might be an ordering problem, and there could still be depending on how QGIS tackles the problem.

For example, take the coordinates above. Both of them are the start point of a line feature. If it were digitized correctly I would expect one of them to be a start point, the other to be an end point.

Not the answer you're looking for? Browse other questions tagged qgis polygon convert line or ask your own question.