If two symbols in same QGIS layer are too close, show only one?

I have a shapefile layer with different underwater, over water and water surface stones. These are often too close to each other to be shown nicely on the print composer generated map. I use svg symbols for the stones, and they are styled (svg for the stones are chosen) as categorized by a class id in the shapefile table.

How do I get QGIS to show only stones that are, for instance, more than 2mm or xx map units apart?

EDIT I edited the question because the OP specified that he is working with point shapefiles (the approach will be similar to the original one, though).

I propose an approach which only recurs to a geometry generator and a custom function.

Let's assume to start from this point vector layer representing the stones:

The layer stores the class ids in the "CLASS_ID" field.

Go to Layer Properties | Style and then:

From the Symbol selector dialog, choose a Geometry generator as symbol layer type and Point / MultiPoint as geometry type. Then click on the Function Editor tab:

Then, click on New file and type show as the name of the new function:

You will see that a new function has been created and it is listed on the left side of the dialog. Now, click on the name of the function and replace the default @qgsfunction with the following code (don't delete the libraries imported by default):

Once you have done this, click on the Load button and you will be able to see the function from the Custom Menu of the Expression dialog.

Now, type this expression (see the image below as reference):

You have just run a function which is saying, in an imaginary way:

"For the current layer (@layer_name), display the geometry ($geometry) from the current feature ($currentfeature) only when it is more than 10 meters apart from any other feature in the same layer."

The only thing you need to change is the research value for the displaying, which in your case should be 0.002 if you are using a Projected CRS. Therefore, leave the other function parameters as provided.

If you want to set SVG symbols for the stones, go to Simple fill and select the proper option: 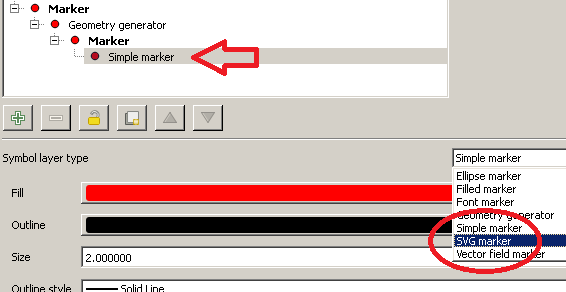 Finally, go back to the Style main dialog and click on the Classify button (at last!) for setting the changes.

You will see that some stones are not rendered (in the following image I also reported a buffer layer of 10 meters for the sake of clearness):

Not the answer you're looking for? Browse other questions tagged qgis symbology svg categorized-renderer qgis-custom-function or ask your own question.

9
What version of SVG should I be saving my images with for QGIS? Any particular options I should use/avoid?
2
How to control line width in legend in QGIS?
1
Creating minimalistic map in *.svg file format?
3
Showing differents label's position for the same vector object in two different view maps in the QGIS Print Composer?
1
Moving symbols in Print layout, not in Main Window
1
Do not show a point symbol for a point if closer than nn meters to another point in same layer
0
QGIS composer - How to create a table with attributes and style of legend?