According to this thread https://stackoverflow.com/questions/37700484/python-gdal-does-not-install-on-mac-osx-el-capitan I added the location of the header file to my path variable. My .bash_profile now looks like this

The error remains the same.

Then I tried following this solution: Python GDAL package missing header file when installing via pip although I do not want to install it in a virtualenv.

Any idea how to fix the errors and get a working installation?

The osgeo module is in 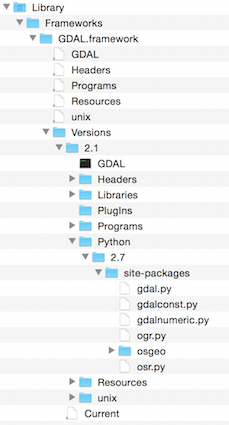 You received the error because the header file was not included in your GDAL build. In order to get all of the required headers, you need to use the latest development branch of GDAL, as it added another header ~3 weeks ago. Set your CC and CXX environmental variables to clang and clang++, then install using Homebrew:

If you try to build GDAL with gcc-8 instead, it will throw syntax errors. As of June 2018 this provides the development branch of GDAL 2.3.0. To install gdal for your existing Python (e.g., Anaconda Python 3.6) and link to GDAL, follow the method of @Holt, but with the below modifications.

Now, set CC and CXX to gcc-8 and g++-8. Next, install gcc-8 with Homebrew if not currently installed: brew install gcc. Then, make the following change to the setup.cfg file:

gdal-config contains all of the information needed to link to include and library files. Next, make the following modifications to the setup.py file:

This sets ARCHFLAGS to blank rather than '-Wunused-command-line-argument-hard-error-in-future', as the latter is incompatible with gcc. Setting stdlib should help clang find the correct C++11 libraries, if used. Last, changing the name from GDAL to gdal lists the package name correctly under conda list. Finally, install the Python package correctly linked to GDAL 2.3.0:

As @Holt noted, be sure to load and test the install in another folder.

Rant: It's crazy that this much effort is needed to install gdal for Anaconda Python 3.6 linked to a centralized GDAL 2.3.0 installation, but that is because the conda-forge gdal folks intentionally broke the connection to Homebrew GDAL ~2 years ago in an effort to equally [not] support MacPorts. This is nuts in my opinion, as others also build from source and managing multiple GDAL installations is a pain. The GDAL package for R, rgdal, correctly links to Homebrew GDAL during installation without any hassle. The GDAL library for Anaconda Python should also do this!

As of today (September 2017), the GDAL package only provides built-in support for python 2.7. Here is how you can install it for python 3+:

If python3 is your default, replace pip3 and python3 by pip and python. Do not forget to replace 2.1.0 and 2.1 in the above commands by your GDAL version.

Once you are done, do not test the python installation in the GDAL installation directory, you would get horrible errors. Go somewhere else and try to import a GDAL package:

If you landed here trying to install geopandas, what worked for me on a 10.13 mac is:

brew went ahead and tried to install a whole slew of dependencies, while what I needed was just pyproj to install geopandas.

Mr_and_Mrs_DMr_and_Mrs_D
10122 bronze badges
add a comment  |
0
Want to improve this post? Provide detailed answers to this question, including citations and an explanation of why your answer is correct. Answers without enough detail may be edited or deleted.

I made a tutorial https://github.com/felipunky/GISPython scroll down to the Mac section.

2.) Go to terminal, you can do so by pressing at the same time the Command and Space keys, than type terminal.

3.) Go to http://www.kyngchaos.com/software/frameworks/ and download and install the GDAL 1.11 version.

4.) Now open the file explorer and press the Command, Shift and G key at the same time, this should enable you to search a directory. Type /Library/Frameworks/GDAL.framework/Versions/1.11/Python/2.7/site-packages and press enter. We need these files to be on our python site-packages folders. So copy all the files and folders.

5.) Repeat the Command, Shift and G press to go to another directory, this time is our python's directory which is at: /Library/Frameworks/Python.framework/Versions/2.7/lib/python2.7/ once you are inside the directory paste all the files you have already copied from step 4.).

6.) Check if we have succesfully installed the library: go to Terminal and type: python than press enter, now type: import gdal if there are no errors we can continue with step 7.).

9.) Test by typing python on Terminal to access the python console. Then type:

If there are no errors you are good to go.

azis511azis511
7144 bronze badges
add a comment  |
-2
Want to improve this post? Provide detailed answers to this question, including citations and an explanation of why your answer is correct. Answers without enough detail may be edited or deleted.

Not the answer you're looking for? Browse other questions tagged gdal or ask your own question.