Spec for TIGER all lines files?

I have read the "technical" documentation for the TIGER geographic datasets and they fail to describe the way the geometry is encoded. The document claims that the shape files encode the geometry of linear features, like roads, but the documentation shows no explanation of this. For example, the beginning of the spec for the all lines files is as follows: 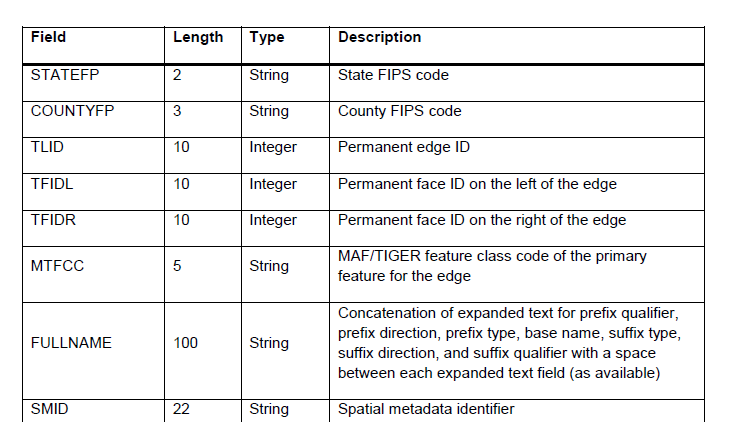 As you see, it is just a bunch of meta data, not geometry. Not only that, the fields themselves are not explained. For example, MTFCC is described as being a "feature class", but the possible values or feature classes are not described! At the end of the file there is the following:

The last two fields appear to be some kind of key possibly linking to some other file (???) which has nodes in it (???) I have no idea because the spec does not further describe these two fields.

I have two questions:

(A) Where can I find an actual REAL spec that actually describes each field in the TIGER shape files?

(B) Where is the geometry for linear features located? (As in what exact file and field and what is the spec for those fields)?

Your question seems to be from a very new starting point, shapefiles are a de facto spatial file standard that was written many years ago by the 500lb gorilla of the GIS industry ESRI. Many government and commercial agencies distribute their data in this format. It is readable by (almost?) any proprietary and open source GIS so in general people don't bother to explain how the geometry is stored, it just is (and those of us who have read the spec try to pretend we didn't see the bit where the byte order flips half way through).

Now as to what is in a TIGER all lines file the Census Bureau have a reference section on their website, which includes a page on what the MTFCC codes are.

Not the answer you're looking for? Browse other questions tagged tiger or ask your own question.