I have the exact same problem as explain in this post. I'm trying to find the shortest path between each building on a map (shp multipolygon) to any transformation plant (shp multipoints) by following a network (shp multipolyline). 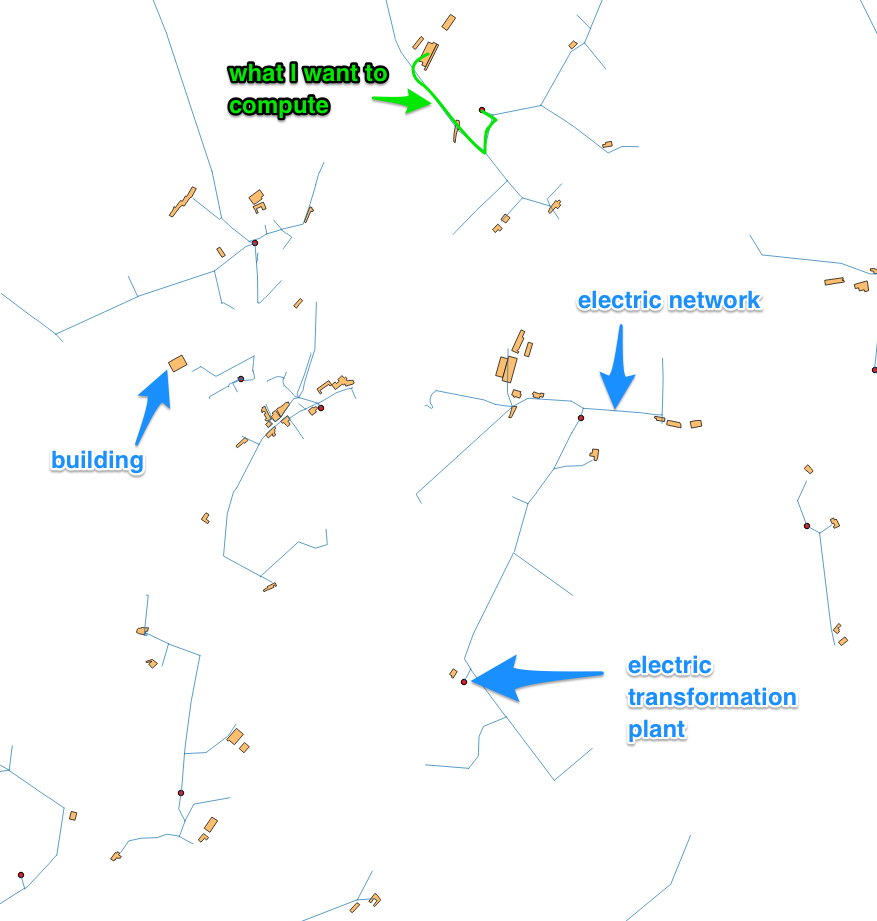 As suggested in the answer given to the OP, I was thinking of using pgr_dijkstra() but I think it won't work. The thing is, if I'm not mistaken, pgr_dijkstra() return the shortest path between 2 points. In this case, we do not know which electric transformation plan we're looking to reach, the goal is to find the shortest path to any transformation plant on the network.

I actually found a way of doing it.

I used pgr_dijkstraCost() which now has a Many-to-Many implementation and exactly does what I want.

The network_edges comes SHP PolyLine file and represent the network itself. It has i, j and length attributes. i and j represent, respectively, source and targed vertices of the edge and length is obviously the length of it.

I used the Networks plugin to create my graph (nodes and edges) and shp2pgsql to import it in my database.

My first thought is that you should calculate the network distance for any (or at least the 5 closest) points to the houses, because you can only know which one is shortest after calculating the distance.

Another approach could be to calculate service areas for each of the transformation plants based on the network. Than you know which house should be assigned to which transformator. After that you can calculate the shortest distance.

How to calculate Network Service Areas in QGIS?

Not the answer you're looking for? Browse other questions tagged qgis postgis pgrouting proximity or ask your own question.

18
How to calculate Network Service Areas in QGIS?
2
Computing distance between two points following network and doing it for 100.000 points?
2
Find closest point on a MulitLineString for each point of a MultiPoint

8
Shortest Path using interpolated OSM points
1
pgrouting shortest path result in wrong order
6
How to filter the graph on which I want to find the shortest path
2
Find closest point on a MulitLineString for each point of a MultiPoint
1
Calculate shortest path and distance between multiple OD pairs using pgr_dijkstra one-to-one
2
Identifying OD-pairs where pgr_withPointsCost() did not find path?
1
Why pgr_dijkstra() only finds the routes that are pretty straight?
2
pgr_dijkstra gives wacky routes sometimes with undirected graph