Split line at points where other lines touch it in PostGIS

I am trying to create an application that will require a network to be rebuilt several times in an iterative process, adding connections as it progresses. Every iteration needs to use the network created in the last iteration to create the next network.

I am using pgrouting to calculate routes along the network during every iteration, and hoping that building a pgrouting topology does not try to node every intersection, because there are several under/overpasses in the data that I would prefer to simply leave as they are.

However I need to node the new connections that are being made to the existing network, so that I can include them when rebuilding the next network iteration. I have been able to draw a line connecting new points to the network, as well as creating a set of multipoints where the line meets the existing network. I want to split the existing network only at these points, but have all segments retain the attributes of the original line.

Essentially, this is the situation: 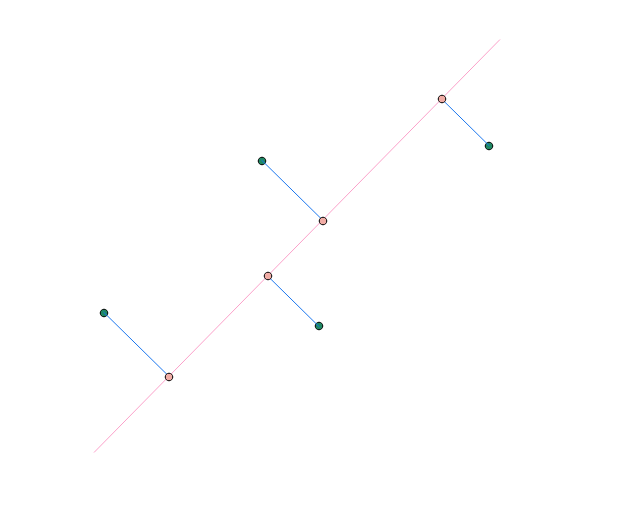 I want to manually split the pink line at all the pink dots, so that I can rebuild a pgrouting topology, and I want all the subsequent segments to retain the attributes of the pink line itself.

This is the code that I am using. I just keep receiving the original line's geometry, un-split.

ST_Split returns the geometry as a geometry collection.

If you want to break the collection into single geometries, you need to use ST_Dump:

It does sound like it's a tolerance issue that is preventing the snapping.

ST_Snap in your answer above from @1saac is one possibility. If you prefer to snap the points to the line, you could use ST_ClosestPoint.

The correct code is:

However I find this very strange, because it looks like I am snapping the network to the points, rather than the other way around. But the output is exactly what I want - the network split at the points. I am then able to build an updated network. If someone can explain better what is going on, please do because I feel like I am left with a working solution that does not make sense, which is never a good feeling.

Not the answer you're looking for? Browse other questions tagged postgis pgrouting or ask your own question.

9
How to Simplify a Line Network Preserving Topology?
1
Does each road segment need to be digitized into a separate entry for a road network?
3
Doubts about how pgRouting topology is built and how flexible it is
1
pgrouting unexpected output
3
Splitting lines at intersections in PostGIS
0
pgRouting not returning node with correct z-value
2
pgRouting assign source and target value to streets based on available nodes