Selecting the correct projection for an imported .csv file

I am trying to import a .csv file into a QGIS project and cannot get it to be correctly positioned. The data is the output from a series of sound recordings (bat calls) that were automatically georeferenced when recorded (on a GPS eneabled bat detector). The recorder GPS is set to WGS84 (I am in the UK).

The projection of the QGIS project is EPSG:3857 WGS 84/Pseudo Mercator with “On The Fly” CRS Transformation enabled. This is the default that was prompted when I added the raster base tiles to the project at the start (Ordnance survey data)

When I import the csv file it plots but way, way off the correct location. I have tried selecting the following as the Projection for the imported .csv file during import but none work. EPSG:3857 WGS 84/Pseudo Mercator [whihc I assumed would be correct] OSGB 1936.British National Grid EPSG 102013: Europe_Albers_Equal_Area(Conic)

If I import and plot the gpsx file from the recorder as a track it plots in the correct place (so I know that the data location was correctly recorded in the field) but the .csv file of the point data (the recordings taken at various points on the track) plots the individual points for each recording in the correct general pattern but miles away.

Can anyone suggest where I am going wrong?

QGIS sets the project's CRS to imported *.csv file (EPSG:3857 in your case). EPSG:3857 is a metric projection (basic unit - meter), while your data stored as degrees (1 degree = apx. 111km on Equator latitude). When you import your data, QGIS 'thinks' you use metres as the main unit, so it shows all your features near the point with coordinates (0;0). 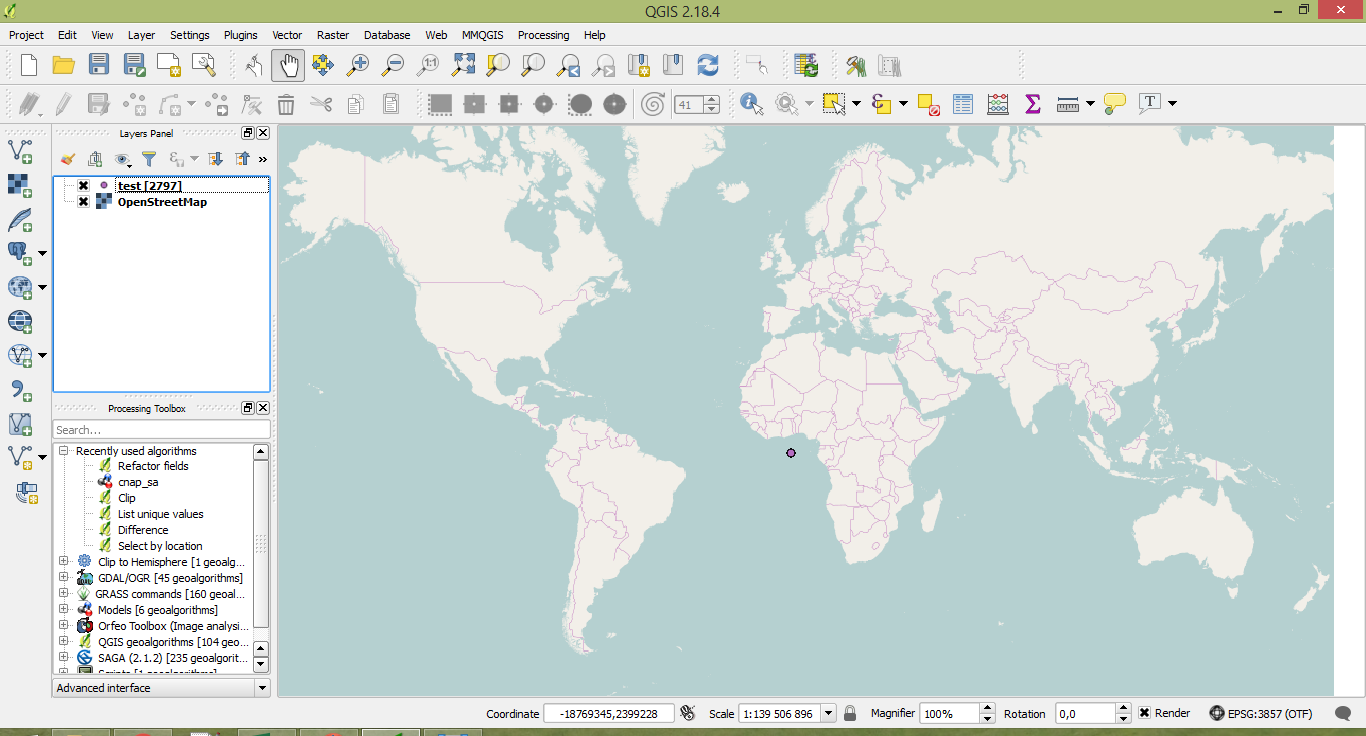 For correct representation of your data, you should set the CRS it is stored:

Not the answer you're looking for? Browse other questions tagged qgis qgis-2.18 or ask your own question.

2
Why are some points in my PostGIS layer not displayed?
2
QGIS: OSM Landscape layer not printed
1
pixel values beyond valid range in QGIS
2
Loading label information from a QGIS syle file (.qml)?
1
QGIS2WEB plugin leaflet option won't work
13
Map display not filling window in QGIS on Mac?
0
Raster>Georeferencer> (NO RESPONSE)