My problem is very easy to understand but I can't find a solution.

I'm actually working on the spreading of a local optic fibre network. These fibres will be contained in plastic tubes buried in trenches. I need to know how many tubes we should bury in each trench.

In GIS words : I make a buffer from the polyline shapefile "trenches", and I need to know how many polylines from the "tubes" shapefile cross (all the lines starts and ends out of the buffers) this buffer, then create a new shapefile with a column containing this count.

So, I'm looking for a similar method that could be integrated in a graphical modeller, as a one-click operation (because I'll have to do it several times, and so will do my colleagues).

You could use the Join attributes by location tool (which hopefully should in available in your modeler). If you select the Attribute summary option and choose Take summary of intersecting features, it will insert a Count field into your layer. If you don't want to calculate the sum, mean etc then just remove them so that the textbox is blank, that way you will only get the Count field as the statistic: 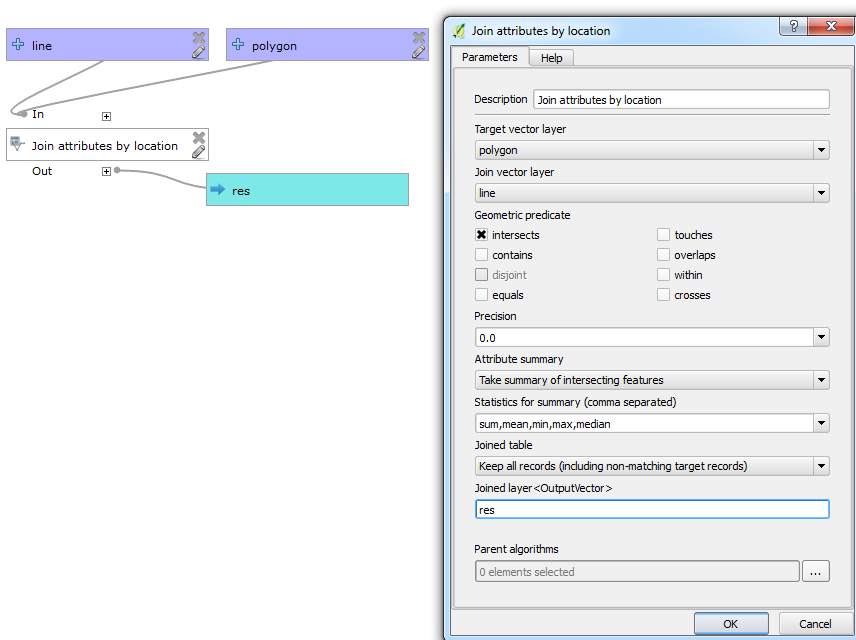 Not the answer you're looking for? Browse other questions tagged qgis polygon geoprocessing line qgis-modeler or ask your own question.

3
How can I create a merged buffer in QGIS then count points that fall within it
2
Are there reference manual pages anywhere for QGIS built-in "buffer" and plugin "points2one"?
4
Count points in polygons using QGIS modeler
3
Lines to polygon
3
Extract raster properties and use them in QGIS graphical model