Why did my network dataset disconnect on its own?

I loaded my origins (~ 120,000) and destinations (~ 4,000) successfully. The analysis settings are set to find the 1 closest destination per origin in miles. Once the OD Cost Matrix layer's settings were as I wanted them, the network dataset added to the OD Cost Matrix layer, and all my origins and destinations loaded, I wanted more information about the solve so I ran it through the Solve tool in ArcToolBox instead of the button on the network analyst toolbar. This way it ran in the background and gave me information in the Results window (it won't do that if you run it through the Network Analyst toolbar).

It solved successfully, failed to locate a few of the 120,000 locations (not a big deal), and it output the lines with the attribute table full of distances that I needed. I exported the table for further study.

After the export of the Lines' attribute table, the OD Cost Matrix layer's settings and the Network Analyst window has a message saying 'Disconnected Network Dataset' even thought the network dataset didn't go anywhere. All the layers associated with the network dataset also had the same missing source red ! thing even though I didn't touch it. All my OD Cost Matrix layer's settings are gone, no trace of it. See below for a smattering of problems I'm having. 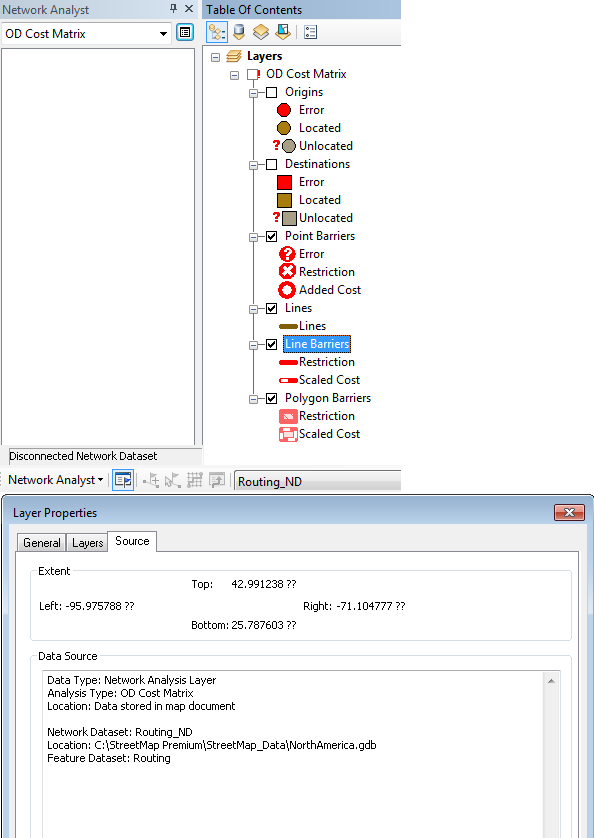 Does anyone have an idea of what happened here, or what I'd need to do to fix this? I know I can re-do my network analysis from scratch but the fact that everything vanished out of nowhere is something I've never seen before. All of the tabular information for the Origins, Destinations, and Lines are still there if I right-click and open the attribute table, but that's it.

Browse other questions tagged arcgis-desktop network-analyst arcgis-10.4 or ask your own question.