Why is ellipsoidal distance greater than cartesian distance?

QGIS calculates all line lengths (horizontal, vertical, diagonal) as 10 001.9 m. The measure tool explains "Project CRS transformation is turned on and ellipsoidal calculation is selected. The coordinates are transformed to the chosen ellipsoid (WGS84), and the distance is calculated in meters."

When I set the ellipsoid to "None / Planimetric" in project properties, I get the expected results (10 000 m).

I don't understand the phrase "coordinates are transformed to the chosen ellipsoid (WGS84)", is it a transformation to unprojected degrees (4326?)? Since 32632 already is based on WGS84, is there anything to transform? If there is a kind of "great circle" calculation involved, I would have expected lengths can only get smaller.

Is QGIS's calculation correct/meaningful, is it plain wrong or do I see rounding errors?

This are the geometries I tested:

Edit as addition to MappaGnosis's answer: I forgot that in UTM the scale is less than 1 inside the standard lines, this seems to be the simple answer for the title question.

Cartesian distance is as measured on a flat Earth. Ellipsoidal distance is as measured on a spherical shape (or ellipsoid). To understand why the latter is longer, draw a circle and then draw a square inside it whose corners touch the circle. Now you can quickly see that the distance between any two adjacent corners is less if you follow a path along the edge of the square, than if you follow a path around the circle. 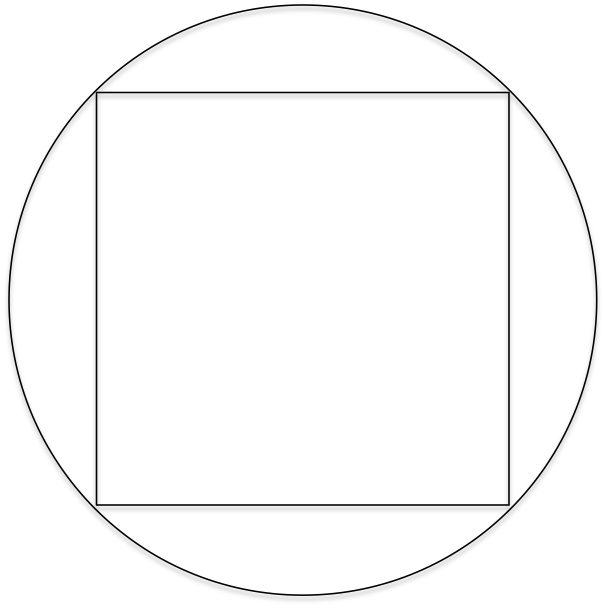 All projections are a compromise (even using a perfect sphere) between distance, bearing and area. No flat projection can be an exact representation of an ellipsoid. Even then, the Earth is not a prefect ellipsoid. It is a 'lumpy' spheroid. So your "expected" distance may very well not be the real distance as the Earth is not flat. Your expectations are based on Cartesian coordinates.

For more discussion around this subject, do a search on this site for 'Haversine formula' and the pros and cons of using geographic vs geometric coordinates in PostGIS.

EDIT re pool balls:
The popular-science quote that the Earth is smoother than a pool ball is incorrect and based on a misconception that the stated allowable size deviation of 0.22% equates to surface smoothness (which is a different thing altogether). If we look at the depth of the Mariana Trench the usually quoted deviation is 0.17%. This should actually be 0.0855% as the WPA tolerance is relative to the diameter, not its radius. This would appear to prove the point, but remember we are not comparing apples with apples since the quoted WPA tolerance is not about smoothness but size. Scaled down, the mountains and trenches of the earth would equate to a surface roughness of 125 microinches rms. The smoothness of a new pool ball is of the order of 32 microinches. So when we compare apples with apples, the Earth is considerable rougher than a pool ball, having a scaled down surface roughness more akin to fine sandpaper - which would be totally unacceptable for pool and would quickly ruin the baize. You could take a cue ball and score its surface until it was rougher than 80 grit sandpaper (thereby making it infinitely rougher than a scaled-down earth) and it would still pass this WPA regulation because the regulation is not about roughness.

Next, let's consider shape. The Earth is an oblate spheroid with large bulges (not to be confused with mountains). These are the lumps I refered to which originally prompted the perpetuation of the urban myth in the comments below. The deviation of the polar diameter compared to its equatorial diameter (see NASA Earth Fact Sheet) might appear to suggest that most global ellipsoids used to describe it are probably theoretically round enough (within the WPA size regulations), but global ellipsoids are all approximations that effectively smooth the Earth. The lumpiness (massive bulges not mountains) means we need local ellipsoids to adequately describe portions of the Earth (see here for simple description - other more in-depth sites are available). Considerable scientific effort has gone into developing these local descriptions which is one of the reasons we have so many datums described by EPSG. A cue ball approximates closely to a perfect sphere, which cannot be said of the Earth.

Finally, though not about roughness or size, a pool ball should also be of uniform weight and hardness and spin without wobbling. The Earth is neither of these things and wobbles as it spins.
So, the Earth compared to a pool ball would have surface scratches you could feel and would not roll straight. It would make a very poor pool ball indeed and any comparison between the two is unhelpful.

Not the answer you're looking for? Browse other questions tagged qgis measurements or ask your own question.

4
Reprojecting between NAD27 and WGS 84?
3
Why does QGIS do an unintended datum shift to WGS84 in the map canvas
5
Determining coordinates of a SHP file
6
Custom Projection in Proj4 has errors, what can I do to implement a 4 parameter transform?
2
AR Spatial aware 3D-Model creation
1
QGIS custom coordinate reference system of a local site