How to create svg line style in QGIS?

I need to draw an telephone or energy lines as is done on the polish-core map. Thelephone line was drown by the polyline. I tried the SVG symbols, when I have a lot of single-lines, for each I 'put' symbol svg on the first and the last vertex. For polylines, unfortunately, line markers located on the central vertexs do not rotate to the next segment, but are suspended 'in the air'.

If someone has already tested this, I'd like to know the rules. I enclose a snapshot of my unsuccessful endeavors. 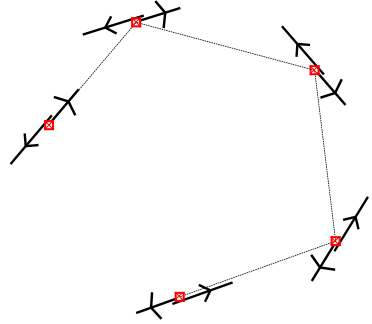 And below is the effect that I need, (now its generated by Inkscape) 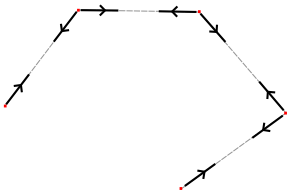 Thanks for the reply.

Perhaps there are better ways of doing this, but for what it's worth:

Horrible, I know. Hope you don't have too many to draw:) Nick. 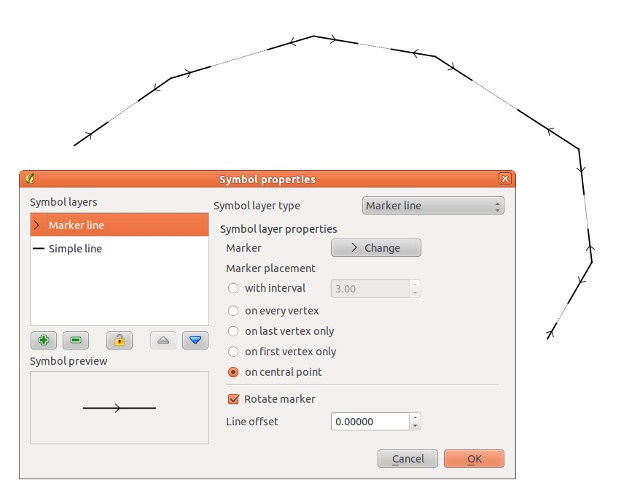 This was using QGIS Master.

Firstly, load the lines and extract their nodes to a new point shapefile. Next buffer the points and use the buffer layer to clip the line layer. This will give you the 'corners' that you need, in a new shapefile. Each 'corner' will comprise one line having two segments.

Use the 'Split Feature' plug-in to convert all of the line segments in the 'corners' shapefile to individual lines. You will now have a new shapefile containing the split lines. What we need to do now is to change the direction of every other line in the shapefile. So, load the new shapefile, open its attribute table and put it in edit mode. Then, create three new integer columns. Use the field calculator to populate the first column with numbers ($rownum will do this). The numbers will start at zero, which we don't want, so populate the second column with values from the first column plus one.

Okay so far? Now we have all of the lines numbered in a column. What we have to do now is to populate the third column with '0's or '1's depending on whether the number in the second column is odd or even. Do this using the Field Calculator (if the second column is called 'NUMBER' then 'NUMBER%2=0' will do this).

We can now select the even-numbered lines ready for changing their direction. Search for all of the rows having '1' in the third column, which will select them. Then (leaving the shapefile in edit mode) use the 'Swap line direction' plug-in to swap the direction of the selected lines. Then save the shapefile.

After that, style the layer as shown in my illustration.

Sorry if this is all a bit gothic, but it's the only workflow I can come up with. Surely, there must be better ways? But it works and eliminates the need for a lot of manual labour. Let me know if you have problems. Nick.

Maybe you've found a better solution by now, but this was an interesting exercise for me.

The basic concept is to create one symbol layer for each piece. I had six layers in total. See energy_line.qml, but you may need to tweak the sizes and offsets to suit your needs. (The style is applied to a "split" copy of the original linestring; i used the Split Feature plugin)

Using this method, I don't see any way to control the lineweight of the arrows, so if more contrast is needed i think you'll need to switch to thicker svg symbols of the chevron/bar. 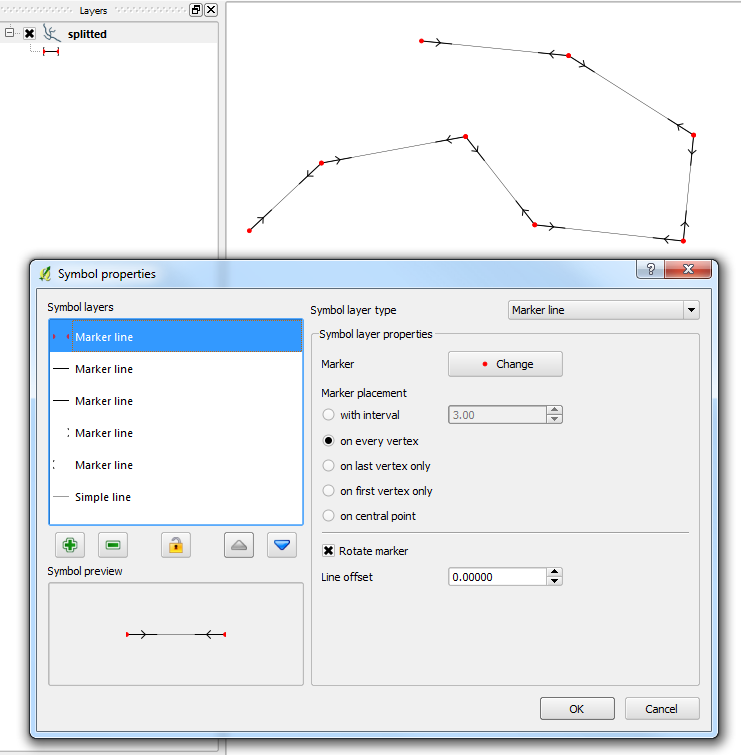 7
How to create transects from polygon centroid?
7
How to create a multipart polygon?
3
How to create perpendicular line from point on one line to an intersection with the nearest polygon layer?
0
Line style width property not being applied in QGIS 2.0.1
1
How to measure and mark a line or point as a template QGIS?
2
How to publish SVG point style to Geoserver from QGIS?
6
Style line/fill in QGIS
1
save QGIS style as SVG