Dissolve multiple shapefiles so that touching polygons become one: GDAL/OGR

Trying to polygonize large rasters* but since the process is taking forever/crashing in GDAL, I am resorting to doing so in ArcGIS. However there is a 2GB limit on shapefiles in Arc so I am taking a combination approach where I split the rasters into 4 parts with gdalwarp, polygonize them in ArcGIS (polygonizing the quarters in GDAL is also taking forever while the process was extremely fast in Arc), and then putting them back together in GDAL to get around the slowness of gdal_polygonize.py and also the 2GB ArcGIS limit.

I am basing my solution partially on the answer found here, but am running into a problem with the final Dissolve step.

*The pixels of the rasters I am polygonzing only contain 1's (i.e. the pixel value of the things I'm interested in as polygons) and NoData (do not wish to have polygons in these areas), so the attribute table after polygonization looks like this: 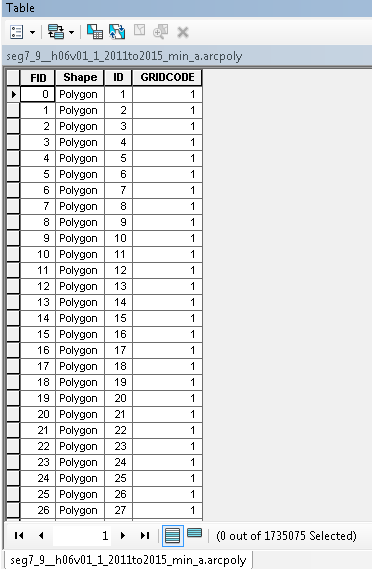 Which is want I expect.

The next step is to merge these (4) polygons back together in GDAL like this:

Which works fine and gives me a result that looks like this, where the highlighted polygon is from one of the input shapefile parts and shows the edge between the two: 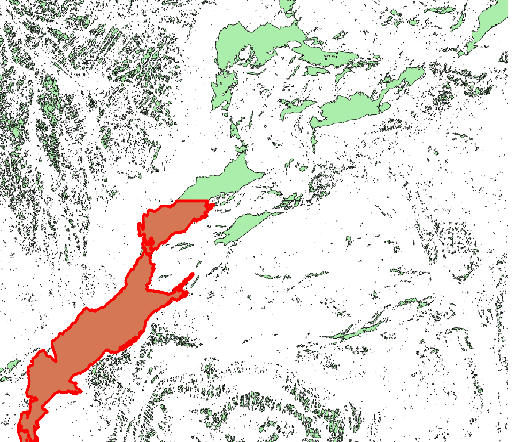 My last step/goal is to dissolve the merge.shp so that the polygons on the edge that are touching (such as the one highlighted in red and the portion above it) become one polygon. In the post linked above, they suggested using the following command (command1):

Because I do not really understand SQL or SQLITE, I wanted to try this command (command2) at first just to see what would happen:

but got the following error:

I looked online and tried looking at documentation of ST_Union but could not find anything useful.

UPDATE: A couple of other variations I've tried and the errors:

Not sure why I'm getting this error or how to fix it.

UPDATE2: I think I found the right command to dissolve based solely on geometry, but I'm getting an error with the ST_Union command:

I tried using GUnion and got the same error.

If I understand correctly, the problem crops up when you try to Dissolve the results shapefile which you get after combining 4 smaller shapefiles via either Append or Merge.

Possibility 1: Update. Rather than use Append or Merge on those 4 files, use Update from the Analysis Tools\Overlay Toolbox. Set the keep_borders variable to NO_BORDERS and those lines should disappear.

Possibility 2: How are you at python scripting? If you've any familiarity with any programming language, you'll be able to do decent at it, even with no training. Also, ModelBuilder includes the option to export a model as a python script. The reason I ask is that a python script doesn't have ESRI's unchangeable 2GB limit. If you have a step or steps that should work, but don't, a pure python script using ArcPy should provide a workaround.

Possibility 3: You might be able to work around this error by running the dissolve command after each shapefile is Appended to the results file. I honestly don't know if that'd work, but ArcGIS is often best approached in a "This shouldn't work, but I'll try it anyway, just in case" state of mind.

Possibility 4: Take the 4 files, create layers from each, use select by location to find only those shapes that overlap or intersect each other, then dissolve just those features. That might take enough of a load off your memory for the process to complete. You'll now have a results shapefile. Use the same select by location (just invert the selection) to select all the features that didn't get dissolved, and Append them to that same results file.

Possibility 5: Eliminate. Merges smaller polygons into the larger ones that they border/intersect.

I hope one of these ideas works.

11
Why is GDALPolygonize so much slower than ArcGIS Raster to Polygon?

2
sqlite version error with ogr2ogr
2
How to dissolve naturalearth vectordata with gdal?
1
GDAL -SQL or -where options
3
A simple way to convert multipoint to point in sqlite table, using gdal ogr2ogr?
2
ogr2ogr sql - returning points from one sqlite dataset that intersect with another
4
Join non-spatial CSV to GeoJSON data source using ogr2ogr and SQLite dialect