I have a question regarding the calculating driving distances between any two points.

I have 2 CSV files, an origin and a destination file, which look like the following:

The goal is to calculate the driving distance between any origin and each destination, i.e., given the two CSV files, the result should contain 6 routes. While I could solve this problem using Google Maps or Mapquest, I tried to go with ArcMap, because the original origin CSV file contains 500 lines, whil the destination file contains around 42.000 lines, building around 20 million routes.

When opening a new project, I choose the "Coterminous United States" map as a map, because all points in both files are located in the United States.

Could it be possible that there are no underlying routes for the Network Analyst to take into account?

If so, how can I generate them?

Importing the data sets worked fine (via File -> Add Data -> Add Data). However, displaying them on the map showed, that there was no object id - so I exported them and re - displayed them on the map, leading to the following points: 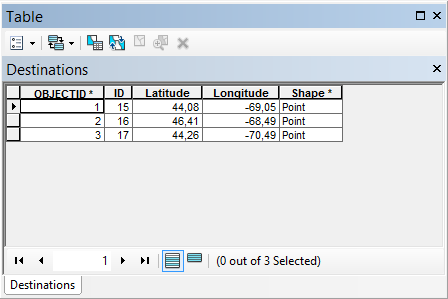 According to this GeoNet answer, adding a route should be possible now. However, after activating the Network Analyst, only the "Network Analyst Options" are clickable.

How can I tell the Network Analyst to calculate the distances between both sets?

arcgis-desktop network-analyst origin-destination
Share
Improve this question
edited May 14 '17 at 2:50

In the toolbox in ArcMap, in the Network Analyst Tools there is a tool 'Make Route Layer'. Use this tool to create the routes.

However, before you can create routes, you need to create your network. ArcGIS does not do this automatically. You have to build it.

Not the answer you're looking for? Browse other questions tagged arcgis-desktop network-analyst origin-destination or ask your own question.