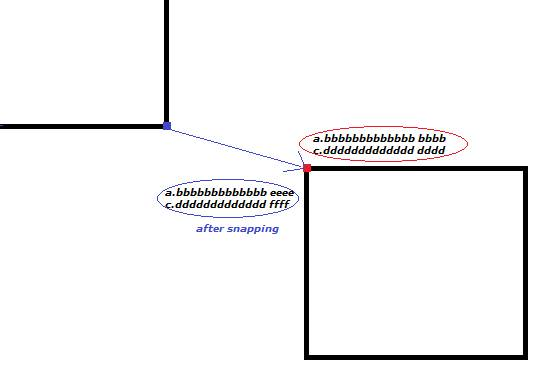 arcgis-desktop editing snapping
Share
Improve this question
edited May 10 '17 at 0:00

There are several issues raised in this question:

Accuracy and precision are not equivalent

You state that you have a question about "snapping accuracy", but the rest of the question focuses on precision issues. Quoting wiki.gis.com:

That is, accuracy is the difference between the actual position and the value measured, while precision is closeness of the values when when measured multiple times.

The IEEE standard defines how floating-point values are encoded in bytes. The mantissa of a 64-bit "double" contains 53 bits (implicitly), which only provides for 15.955 significant digits (which, depending on the magnitude, only permits 12-14 digits to the right of the decimal in decimal degree values).

I should mention that any geospatial tool which cannot tolerate coordinate differences of less than a micron ought not be trusted for any purpose.

Shapefile isn't the best storage format for this sort of operation

The file geodatabase format permits you to specify precision in coordinate values in a way that shapefile does not. Geodatabase also defines the origin from which measurements are made, the absolute precision with which it is measured, and a separate value for the tolerance by which coordinates are considered equivalent. In fact, it would be possible for geodatabase to map at 1.0e-20 degree precision, but only within a single square micrometer.

I would recommend you define a custom spatial reference, with a WGS84 geographic coordinate system (GCS) an origin of {-400,-400}, an XY resolution of 0.0000001, and a XY tolerance of 0.0000002, then use that to create a feature class, and load your shapefile into that. Once you've finished snapping, export again to shapefile.

First of all its about precision and not accuracy. Its important not to mix them. Accuracy is something that includes many topics(like origin of the data and so on). Precision is kind of the technical side to store and process the data.

The 8.th decimal is already milimeter, so there will be no task ever were a GIS might reasonably need 20 decimals. The normal snapping tolarance where the program decides if two points are on top of each other or if polygons are neighbor or not is by default at the milimeter level. If you do not change this the deviations behind the 9th decimal (rounding issues) does not matter. And even if you would set the tolerance to a much smaller value i think that the program and underlying data types can´t handle them anyway. The 14th decimal might be that spot like you found out.

Not the answer you're looking for? Browse other questions tagged arcgis-desktop editing snapping or ask your own question.

3
What is the ArcGIS equivalent to WEED tolerance?
0
organizing attribute table: multiple sets of variables per point
2
Why are my polygons automatically simplified/generalised when merging them in ArcMap 10.2?
2
Extending line by adding point at end of it using QGIS?
3
Splitting polyline with ArcGIS Pro snapping environment?
6
Extract By Mask moving pixels in ArcGIS Desktop?
3
Snapping end lines ArcGIS 10.4
6
QGIS doesn't update some snapping options from Python
1
Why is ArcGIS API for JavaScript Map.setExtent snapping my extent?