When looking at the stream, I only want the stream's watershed minus that of lake 1. In other words, that which falls from roughly start to finish. There should be 4 catchments areas: one for each element previously mentioned and in the following picture. 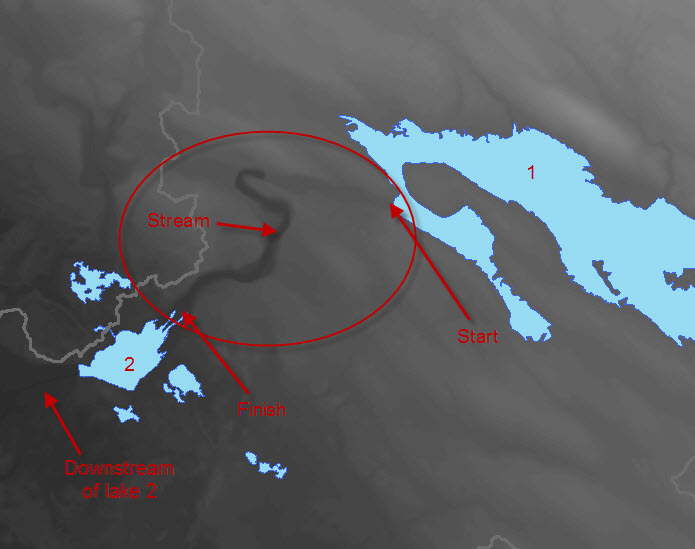 Is this possible at all? Here are the steps I have gone through:

1- DEM leveling: I've modified the raw DEM slightly so the lakes are a flat surface and not a slightly odd surface.

2- DEM reconditioning: modified the DEM with linear feature for, what i understand, is slightly change it's structure to allow water to pass through known streams with ease.

3- Fill sinks: Filled sinks in the DEM to avoid water getting "stuck" in processes.

6- Stream definition (this is where I think I might not be getting it): The stream definition takes as input the flow accumulation, which is a grid containing cells with a value in cells flowing into them.

There is a user-defined area for the area size I'm guessing, which I used 50km2. I've tried with many values all not giving results I might want so I continued with 50km2 to see if something would change and give me a result I would like.

7- Stream segmentation: This gave me a grid with cells having unique values per stream, fairly straight-forward.

8- Catchment grid delineation: Creates catchment areas with the grids created through the previous steps 6 and 4. The results vary depending on the area chosen in step 6. The smaller the ares, the more catchment areas I get.

9- Catchment Polygon processing: Creates a polygon feature class with the catchment areas created in the step 8.

10- Drainage line processing: Converts my stream link grid into drainage lines (doesn't give me many drainage lines. I think I might get more with a chosen area for step 6 lower than 50km2.

11- Adjoint Catchment Processing: This tool did not work for me. I get an error. I'm thinking it might be because I have too little catchment areas and they already are as "joined" as they can be for this tool to work properly. That is my guess, it could definitely be something else.

Here is the error i get when running this tool:

Now, is everything I'm doing here in vain? Are the steps followed here ultimately going to lead me to my objective explained previously of getting the catchment areas of specific locations? I feel like I am building a tool but i can't quite grasp where it is going.