Objective: Calculate best route (hiking distance/difficulty) from point A to point B using mostly trails and non-trail terrain, but not walking in a big river. B is not necessarily on a trail. In real life: Point A: trailhead in a park. Point: Benchmark or control point monument somewhere in the park. Need to calculate most logical way to get to that point, honoring rules of the park in terms of trying to stay on trails.

What tools do I need to learn to use to be able to perform this analysis in ArcGIS Desktop?

I know about least cost path, but that does not take trails into account. There could be multiple routes using the trail, so the analysis needs to figure out the least distance, and possibly the easiest (some logic describing slope).

arcgis-desktop route
Share
Improve this question
asked May 22 '17 at 22:21

I use this model to produce an ideal hiking route up a mountain. I just used slope but you can add any other variables into the analysis like ei: aspect, vegetation density, rivers you dont want to cross... reclassify them then use weighted overlay tool to input all the reclassified layers and this tool will allow you to assign different weights for each of the reclassified layers. then use the cost distance tool where you input the weighted overlay raster along with the end Feature class of the road (make sure to create a backlink raster), then input the cost distance raster+backlink raster+the start feature class into the cost path tool. The output will be rasterized trail/road. Then convert it to a polyline with the Raster to polyline tool, then break it apart with feature vertices to points, then use the extract multi values to points tool where you would input your bare DEM and slope and each point of that line will be updated with the DEM elevation and slope 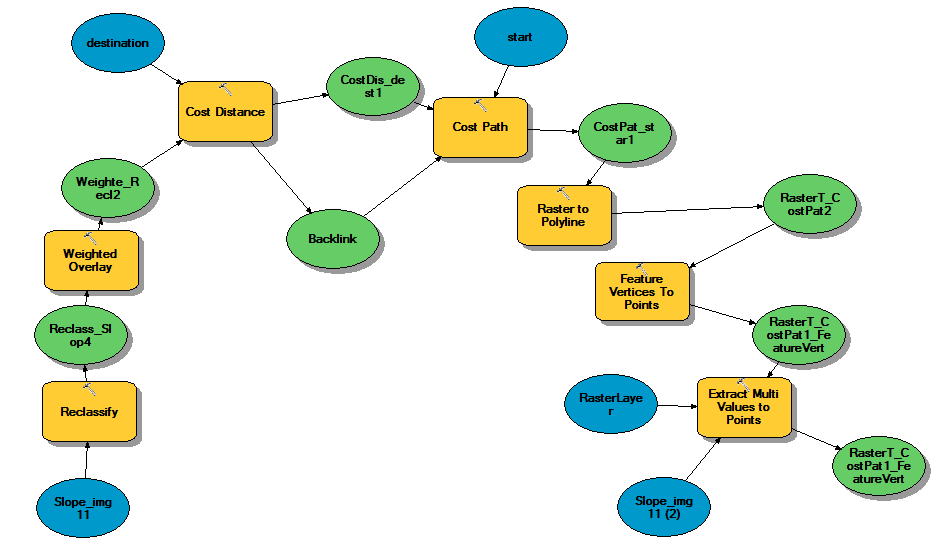 I would implement Tobler's hiking function in ArcMap. The main rationale is that hiking optimal routes may be (mainly) influenced by slope, which affects hiking speed. There are many hiking functions available, but Tobler's one seems (on the basis of available scientific literature) to still hold a general validity.

In ArcMap, Tobler's function can be implememted through the Path Distace tool, which takes a couple of different inputs: a DTM, a SLOPE raster, and a customized Vertical Factor table representing the estimated time to traverse one unit of space at different slope values. As for the latter table (as well as for the implementation in general), you may find a good step by step tutorial here: https://bcourses.berkeley.edu/courses/1289761/pages/in-class-exercise-11-dot-2-cost-distance

What you will get is an accumulated cost raster, representing the walking time from your start location, and a backlink raster which you can use afterward to find the least-cost path between A (source) and B (destination).

In your case, since you have trails (in vector format, I guess), I would create a small buffer around them, and cut the DTM to the extent of the buffered trails (using Extract by Mask tool). Then, I would calculate the slope on the basis of that "modified" DTM. Those rasters (cut DEM and SLOPE) would be the ones to be fed into the Path Distance tool.

Bear in mind that the least-cost path obtained is anisotropic, that is it varies according to the direction of movement. So, going from A to B can be not as costly as going from B to A. Hope this helps.

Not the answer you're looking for? Browse other questions tagged arcgis-desktop route or ask your own question.