From pdf to google maps overlay

Context - I'm doing some research into healthcare provision and I'd like to visualise the data. I'd like to be able to put these PCT boundaries 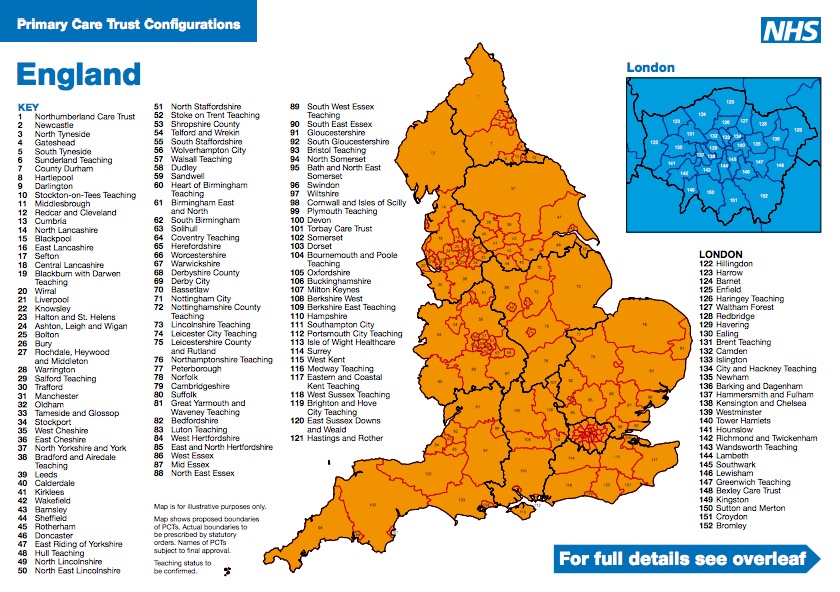 as an overlay to google maps and change their colours and so on to show data... I'm running osx and I'm fairly IT friendly, but I've got no idea where to start on this and google is sending me in all manner of different diagrams with language I'm struggling to get my head around. So I'm looking for any information people can give me on:

Thanking you all kindly in advance...

EDIT - should point out that I'm happy to trace the lines with a tablet if that's what it takes - doesn't have to be postcode perfect just as long as it's recognizable...

There are quite a lot of options, so I'll present a few generic ones:

Probably the most effort with the steepest learning curve. Store your data in some sort of database (typically PostGIS, but possibly SpatiaLite), use a middleware mapping server (like GeoServer or MapServer) to serve out a WFS which can be overlaid with Google maps using the Google Maps API. From a technical perspective there's no technical reason you have to use Google Maps here - OpenStreetMaps or Bing or even OrdnanceSurvey OpenSpace could be used. The following resources may be helpful here:

I think pretty much all of the stack is operating system agnostic so should work on OSX.

Convert your areas to KML, style them as desired, put them on a public web-server somewhere then use the Google Maps API (or whichever you go with) to show your data. I don't know much about KML creation/conversion but some searching should get you far.

Pretty much as the title suggests, use Google Fusion Tables. I don't know much about it so can only give a basic pointer, you may have to use this in combination with the KML one, but its designed for data visualisation and can come up with some very pretty stuff.

Note - If you are going to use Google Maps, they do cost money after a certain number of impressions.

The link http://gis-techniques.blogspot.com/2011/05/choropleth-mapping-techniques-for-web20.html has nice comparison among different open source mapping tools and techniques as you want.

Not the answer you're looking for? Browse other questions tagged google-maps web-mapping or ask your own question.