How to render relief shadows on my map?

I have my OSM data in a local server. I already done with the contour lines using Phyghtmap and achieve a good result.

Now I'm trying to show the relief "shadows" like this beautiful map:

I know it is not OSM data, just some kind of transparent PNG layer, but I don't know how to create it...

By reading this I'm now able to convert my HGT files downloaded by Phyghtmap to GeoTIFF but it have a very bad resolution... 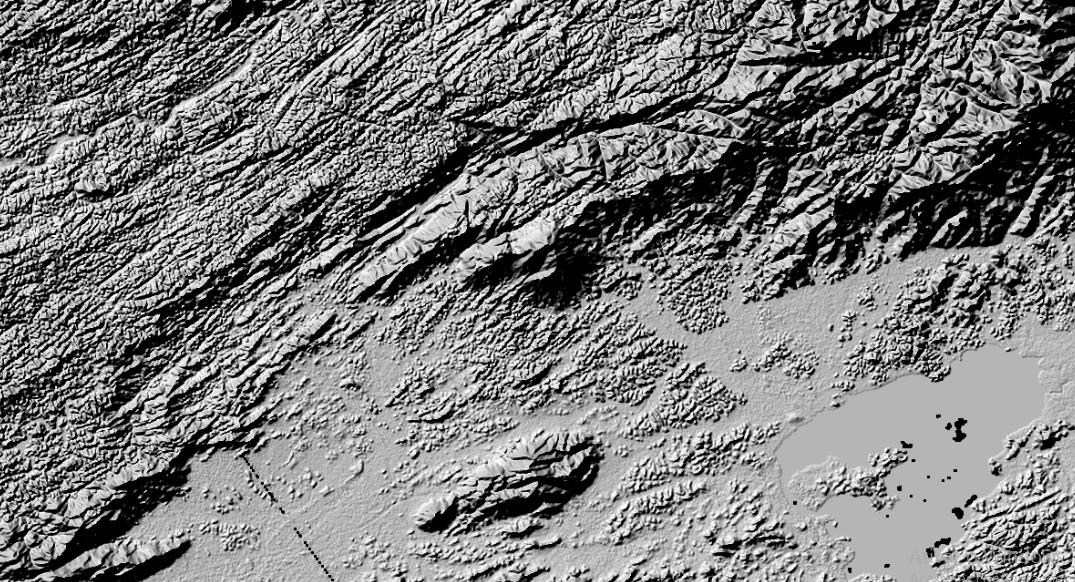 geoserver srtm hillshade
share|improve this question
edited May 30 '17 at 8:28

You can use gdaldem hillshade to create hillshades.

This command outputs an 8-bit raster with a nice shaded relief effect. It’s very useful for visualizing the terrain. You can optionally specify the azimuth and altitude of the light source, a vertical exaggeration factor and a scaling factor to account for differences between vertical and horizontal units.

The value 0 is used as the output nodata value.

The following specific options are available :

-z zFactor:
vertical exaggeration used to pre-multiply the elevations
-s scale:
ratio of vertical units to horizontal. If the horizontal unit of the source DEM is degrees (e.g Lat/Long WGS84 projection), you can use scale=111120 if the vertical units are meters (or scale=370400 if they are in feet)
-az azimuth:
azimuth of the light, in degrees. 0 if it comes from the top of the raster, 90 from the east, ... The default value, 315, should rarely be changed as it is the value generally used to generate shaded maps.
-alt altitude:
altitude of the light, in degrees. 90 if the light comes from above the DEM, 0 if it is raking light.
-combined:
(starting with GDAL 1.10) combined shading, a combination of slope and oblique shading.
-multidirectional:
(starting with GDAL 2.2) multidirectional shading, a combination of hillshading illuminated from 225 deg, 270 deg, 315 deg, and 360 deg azimuth.

The result you show in your EDIT is an expected result. However, the shade effect is very stark, which is probably not what you want for an overlay. To get a lighter/smoother result, make sure you have the correct -s factor set for your source height data, and then use the -z factor to tweak the vertical exaggeration.

Alternatively, you can use regular image manipulation to smoothen the image to produce an overlay that is pleasant for your usecase.

I'd say use gdaladdo like others suggested, the ugly look is probably due to high z exxageration and too high resolution... try with a smaller z factor, and then add overviews to the output, that might help (otherwise, you'll need to find a too to perform an interpolation pass even on the native resolution, you might want to look at https://mapzen.com/blog/terrain-generalization/ )

Then, import it in GeoServer and use multiply compositing to get a good looking result when merging it with your base map.

Not the answer you're looking for? Browse other questions tagged geoserver srtm hillshade or ask your own question.

1
Losing resolution of my DEM/TIFF when converting from HGT

17
Shaded relief from DEM in GRASS and QGIS
15
Using Hillshade option in ArcMap?
4
Is it possible to produce a decent looking shaded-relief map at 50K-scale-or-larger using SRTM3 DEM?
2
Should I use OpenLayers + GeoNetwork + GeoServer together?
0
Creating Map from database
0
A way to generate random/fake sensor data
2
Read SRTM HDG elevation files with C++ / Strange negative numbers (not Null)
1
How to create new raster from only the extreme scores of another raster? (Correcting errors in ASTER elevation data)