My inputs Point A, Polyline A, Distance from pointA. Output Point B.

This didnt work for me, PointB is turning out to be the same as PointA.

QueryPoint is not what I want either since I have a starting point which I need to query from.

How can I find PointB from PointA using a distance along the curve/line ? 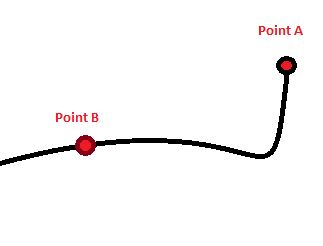 The method you are using is incorrect, it is for finding the closest point on the line and it's distance, think of it as snapping to the line.

You are asking to find a point measured along a line. You want to be using the method QueryPoint.

Not the answer you're looking for? Browse other questions tagged arcobjects point geometry line or ask your own question.