I have a spatial point data set, where each point represents a person pronouncing a word in a specific fashion. Let's say I have six different pronunciations.

In an earlier iteration, I aggregated the point data to a hexagonal grid, the color represents the dominant pronunciation in the hexagon while the opacity represents its dominance, see: https://www.srf.ch/static/srf-data/data/2016/dialektkarten-karte/

Now I'd like to spatially interpolate the data to get a continuous surface, similar as Josh Katz did: http://www4.ncsu.edu/~jakatz2/files/dialectposter.png 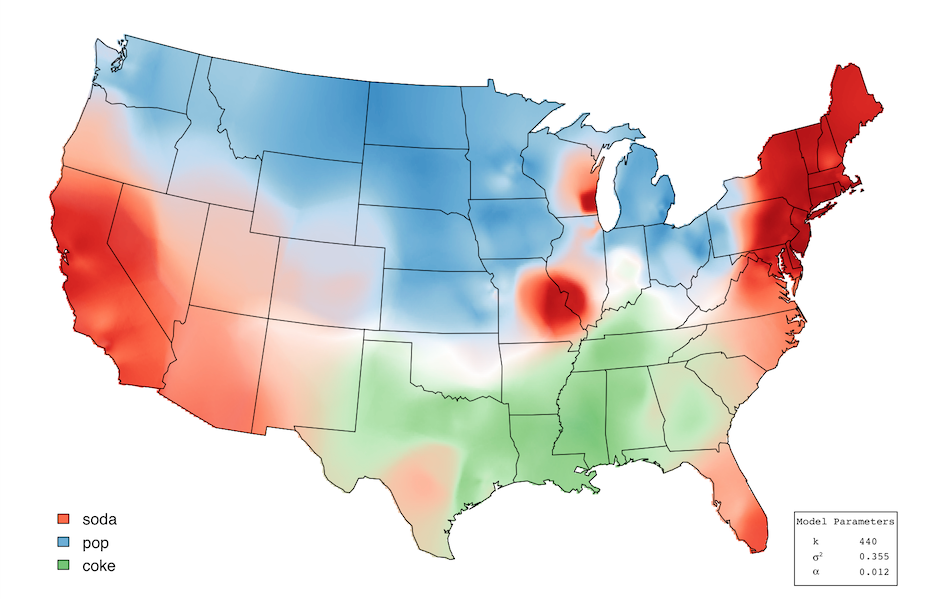 He uses something he calls "k-nearest neighbor kernel smoothing" but he's not publishing his R code so I don't fully understand how that is supposed to work with categorical data. I perfectly understand on how to do it with continuous variables, but not with the latter.

The pseudo-algorithm I came up with so far:

But maybe this is completely off - and also, I wonder whether there are R packages for spatial interpolation of categorical data. So far I have only found knn methods and the like and I suppose I have to build something myself.

In the end, I figured out a method with the kknn package. If somebody is still interested in this answer, I recommend reading my blog post on the topic.

10
How to grid unevenly sampled categorical data?
3
Method to compute and visualize the closest set of facilities from OSM data
2
Understanding the cell size argument in the kriging tool, ArcGIS
2
Interpolation of categorical data from a polygon surface with gaps
1
How to perform loop on raster files?
1
Accounting for spatial autocorrelation in rasters
0
Most suitable interpolation method - regridding
1
Choosing tool to create raster with probability of occurence on each cell using ArcGIS Desktop?