Intersection between an angle and a polygon (postgreSQL + postGIS or Python2.7 + shapely + psycopg2)

I have a point geom feature (in wkb) in a PostgreSQL database table (with postGIS extension). There is also an azimuth value (degrees), as float, in an other field of the same table.

How to perform, as simple as it would be to cut a part of a cake, an intersection between a x[m] buffer around the point and a 20° angle around the azimuth (±10° on both side, the azimuth should be the bisecting line of the angle)?

From now I've calculated the buffer as an other geom (as a polygon also in wkb) which is stored in an other field of the table.

I wonder what would be the faster and more CPU effective calculation to intersect this circle with the angle?

The only postGIS function I have found yet is ST_azimuth: http://www.postgis.org/docs/ST_Azimuth.html but it may be rather "complicated" to implement as it would need to calculate two "virtual secondary points" that are "far enough" from the buffer and apart respectively from -10 and +10° from the existing azimuth and then make the difference between these two new azimuth angles... And after, I really can't figure out how to intersect an angle, which is some kind of "not clearly defined" geometry, with the circular buffer.

An other point; at the end I would need to implement this in a Python script (I'm basically using shapely and psycopg2 modules yet). But for now it could be done in an SQL query directly on the postgreSQL DB.

In fact, one don't really have to calculate (unless high precision is needed) the resulting intersection between the buffer around the point and an angle of ± 10° (or whatever angle) on both sides from the azimuth direction.

On can simply build the triangle. Let's have a look...

That's it.
Result look nice, here some intersections between circular buffers around some points and some given azimuths, with a ± 20° "angular buffer" around these azimuths: 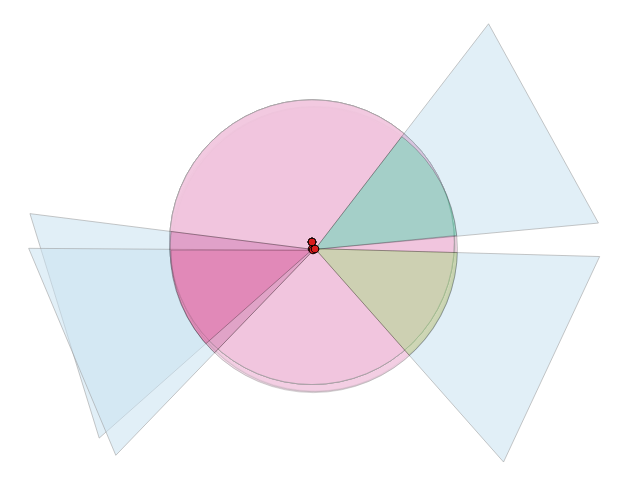 Not the answer you're looking for? Browse other questions tagged python postgis postgresql intersection shapely or ask your own question.

21
How to calculate the angle at which two lines intersect in PostGIS?
6
How to create a buffer on a linestring with varying or increasing/decreasing width
2
Creating many-to-many table from intersection between two polygon layers in QGIS?
13
Map-matching GPS points to the road network!
3
PostGIS does not find intersection between line and polygon
1
Inserting a Shapely Geometry LineString back into PostGIS database with psycopg2?
2
Azimuth calculation from One to Many Points in PostGIS
3
PostGIS generate center POINTS from multilinestrings and multipolygons (for each line and polygon) in the memory