So I have a point shapefile, with each point representing a bus stop. The shapefile contains a separate stop point for both sides of the road, which I want to consolidate into one point.

So first, I used Integrate to snap the points together so that the points representing the same bus stop are in the same geographic location. Integrate doesn't get rid of duplicate points though, so to do this I thought Dissolve would work - and it does - but I can't seem to figure out how to use Dissolve while retaining the shapefile's attributes.

From what I understand this should be achievable by adding the fields you want to keep in the "Statistics Fields" box. So I did this with the Stop ID, and for statistic I chose "FIRST" - from what I understand this should retain the first field value in each pair. I also tried "MIN" since the stop ID is a numeric value. Both times, the points dissolve just fine, but in the attribute table the Stop ID field contains the same value for every point.

Here is a screenshot of my inputs for the Dissolve tool: 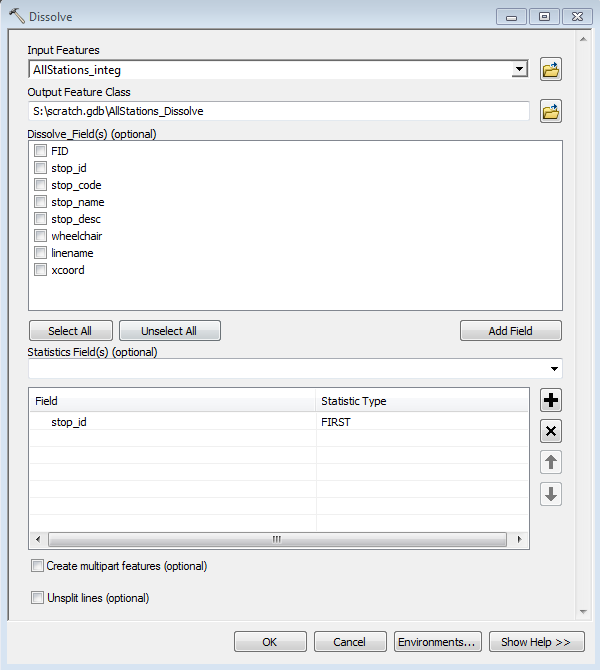 Unfortunately there is no field in the data that marks whether points represent the same stop, so I can't Dissolve by a certain field to achieve the desired outcome.

So how can I make it so that it properly retains this field when I use Dissolve?

A way of solving this is to create a grouping field which would be the field you use in the dissolve field parameter.

So what do you use? Well as you have snapped points to each other to create "stacks" of points a grouping value would be the X coordinate or Y. So simply add a new field containing the X coordinate, you can do that with the Add Geometry Attributes tool. Then you run the dissolve tool with the X field as the dissolve field and stop ID as your statistics.

Make sure you un-tick create multi-part and go into the environment settings and disable M and Z output, so you get a normal point FeatureClass.

Not the answer you're looking for? Browse other questions tagged arcgis-desktop dissolve or ask your own question.