Why my Geoserver on JBOSS/RHEL is slower than on Tomcat/Windows?

I have my Geoservers in 2 different environments: Tomcat on Windows and JBOSS on RHEL. I was guessing that JBOSS on RHEL will be faster, but to make sure I made some test plans with JMeter.

My observation shows that Geoserver on JBOSS/RHEL is noticeably slower than on Tomcat/Windows. This brought me to early conclusion that this is because the JBOSS/RHEL is not optimally configured.

But to be sure I made another test with both, but instead of using Geoserver, now only with static content (simply file) with format similar to Geoserver response:

I returned to the Geoserver test plan an played with Image Processing and Image Encoding options (image below) in Geoserver JBOSS/RHEL. 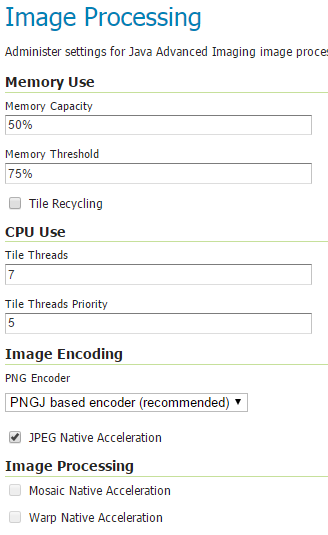 This is because I suspected the java/image processing is the source of problem. But the result is the same: Geoserver on JBOSS/RHEL is slower.

The speed difference of the two Geoserver is not only measured in JMeter, but even visually noticeable in OpenLayers(!). 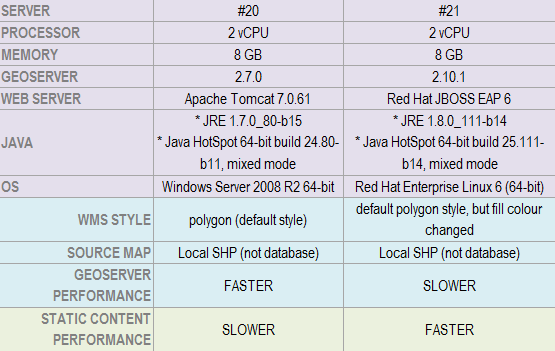 Now the suspect is clear: the Geoserver on my JBOSS is not working optimal.

Where do i start to try and fix this?

ADDED INFOS: Java version is added in the above comparison.

I checked this as suggested by @bugmenot. I think the most relevant item is the JVM Optimization in the Container Considerations. The link suggests to set several JVM parameters (1-7 in the table below). Another site suggests few other parameter (8-11).

Therefore i checked both server:

The JVM parameter in JBOSS does not differ too much with Tomcat.

But still, I tried to increase (in JBOSS server #21) the InitialHeapSize to 128MB and MaxHeapSize to 2048MB, with the following command:

No error. But when i check with the command:

Both heap size doesn't change to the value I wanted.

So my question now:

Below are images showing the test plans.

The above shows Summary Report of Geoserver test plan: JBOSS is slower than Tomcat. 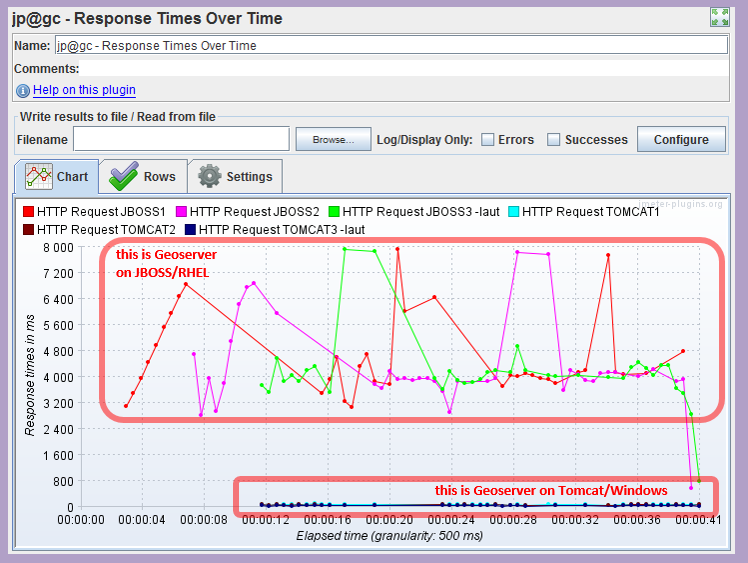 The above shows Response Time of Geoserver test plan: JBOSS is slower than Tomcat.

The above shows Summary Report of Static Content (no Geoserver) test plan: JBOSS is faster than Tomcat. 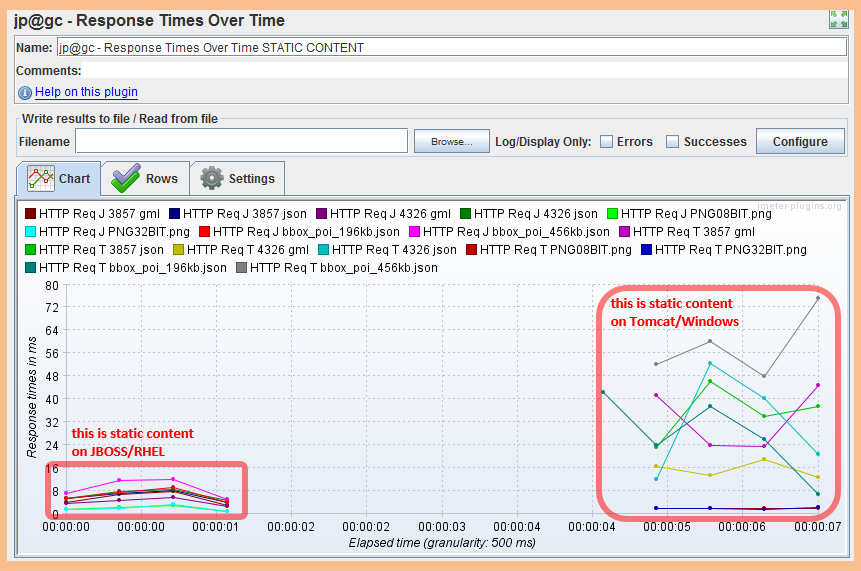 The above shows Response Time of Static Content (no Geoserver) test plan: JBOSS is faster than Tomcat.

1
WMS application in Apache
2
How do I configure JVM to run in server mode when using Geoserver as a Windows service?
7
How to get JAI + JBoss 7.1.1 + Geoserver 2.3.0 to work?
5
Why do I need to restart tomcat when using WFS from GeoServer across different apps and workspaces?
3
deploying geoserver on linux or windows: performance implications?
5
MapServer very weak performance vs. GeoServer - Why?
1
Layer from PostGIS view with dissolve slower than without in GeoServer