Use field calculator to return the word after "unit"?

Working on ArcMap Desktop 10.5; the file in question lives in a file gdb. I have a polygon layer with a field of full property addresses (string) from which I need to extract ONLY the unit number, to be populated in a new blank field STUNIT (string). The addresses are all different lengths depending on presence of street direction, etc. so my addresses, for example, could look something like this:

I have already performed a selection to return only records which contain the word "UNIT", about 4000 records. My goal is to populate my STUNIT field using the python parser in field calculator, with ONLY the "word" directly following UNIT. I have tried variations of the split function which looks something like this

but, without fail, get the following error messages:

I have checked for spaces within/outside of the function but none exist. I have also tried a variant where I use find and replace to add a * to the end of the word "UNIT" and use the * as the delimiter in the function, but get identical results. Can a word in a string field be used as a delimiter for the split function in Arcpy? If so, what am I doing wrong/if not, is there another workaround that does not require a return on the nth object?

I have several years experience with ArcGIS but relatively new to python.

You can do this in the field calculator using regex. Finds the word UNIT and returns the next word. If it doesn't find UNIT then it won't return anything.

In the Field Calculator check Python parser, and Show Codeblock. In the Pre-logic script code enter:

And in the expression: 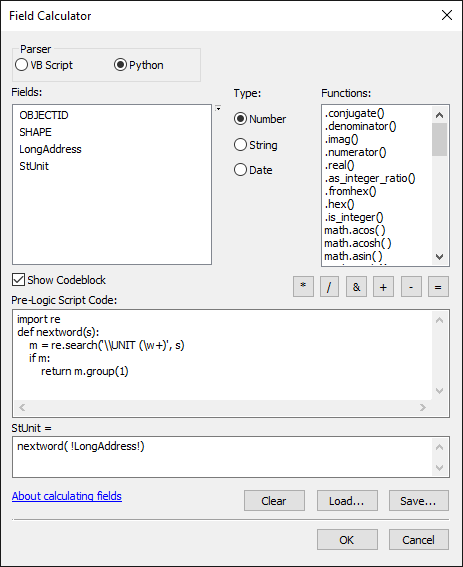 You may want to define a function for this because it will go beyond basic manipulation of the field value.

enable the show codeblock button in field caluclator and in the the pre-logic script code area try this:

then in field cal area below pass the field as the function's parameter:

Not the answer you're looking for? Browse other questions tagged arcgis-desktop field-calculator python-parser arcgis-10.5 address-parsing or ask your own question.