I am new to GIS and have a problem with using geo-coordinates which I got from Google. I have some lat, lng data in my database(MSSQL) which I obtained from Google API (I think it should be in 3857 format), however, I needed to create a layer in GeoServer, so I created a view as

In Geoserver, when adding a layer I use the following setting which I believe there is something wrong with it and I am not sure which Compute shall I click and in what order. 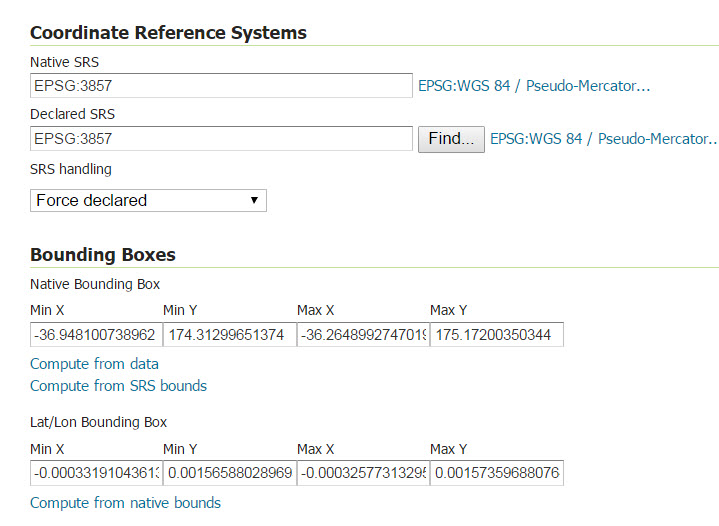 In the publishing, I also select point as default style.

and finally in leafLet

They either sit in the middle or on top of the map.

I have some lat, lng data which I obtained from Google API (I think it should be in 3857 format)

That's the first source of confusion. EPSG 3857 corresponds to Web Mercator (which uses metres). This is the coordinate reference system used on Google Maps, Leaflet, Bing Maps and ArcGIS.

However, lat/long data corresponds to EPSG 4326 (which uses decimal degrees).

So if your dataset uses lat/long, you should specify EPSG 4326 as the Native SRS in GeoServer.

You can optionally specify the Declared SRS to be EPSG 3857 if you want GeoServer to re-project your data to Web Mercator, but this isn't necessary to use the layer in Leaflet, as Leaflet and GeoServer will work together to perform the conversion on-the-fly.

See https://gis.stackexchange.com/a/48952/3112 for a good explanation of these coordinate systems, and http://docs.geoserver.org/stable/en/user/data/webadmin/layers.html for an explanation of Native vs Declared reference systems.

Latitude and Longitude coordinates from Google will not be EPSG:3857. They will be WGS84, which is EPSG:4326 (or close enough).

On GeoServer, make sure your native CRS is EPSG:4326, and then remove the line about CRS on Leaflet and you should be good to go. (The EPSG:3857 CRS is the default for Leaflet, and it knows how to ask GeoServer for it.)

Took me a while but found the problem. GeoServer needs data in the format of long lat not lat long, so the query should be

And for the GeoServer leaves the Native and declared the same 4326, LeafLet converts it to the appropriate format automatically 3857

Not the answer you're looking for? Browse other questions tagged geoserver coordinate-system leaflet or ask your own question.

219
EPSG 3857 or 4326 for GoogleMaps, OpenStreetMap and Leaflet
2
Show points from WMS on Leaflet